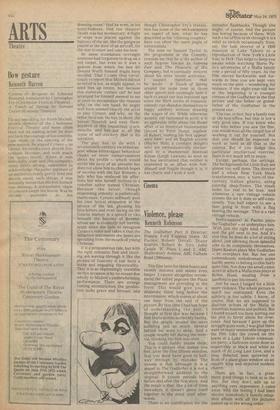 This film lasts for three hours and twenty minutes and seems even longer. I cannot altogether recommend the salted popcorn the Plaza management are providing in the foyer. This would give you a desperate thirst long before the intermission, which comes at about one hour from the end of the picture. By that time I had lost hope of understanding the plot. I thought at first this was because I find Mafia stories incredibly boring. But the people around me were suffering just as much. Several behind me went to sleep. And a couple nearby left during the interval, thinking the film was over.

You could hardly blame them. This is a picture that makes you feel, after the first fifteen minutes, that you must have gone in halfway through by mistake. The trouble is that although it is a sequel to The Godfather it is not a straightforward addition to the original. It covers periods both before and after the first story. And the result is that, like a lot of films nowadays, it doesn't piece itself together in the mind until afterwards.

There is no justification for the

intrusive flashbacks. Though you might, of course, find the picture less boring because of them. With such a lot of film to sit through it is a relief to switch occasionally from, say, the lush interior of a 1958 mansion at Lake Tahore to a reproduction of New York's Little Italy in 1918. This helps to keep you awake while watching Mario Puzo's adventures of a Mafia family over a period of fifty years. As the film moves backwards and forwards in time you are kept very much on the alert — wondering, for instance, if the eight-year-old boy at the beginning is a younger version of the Godfather in the first picture and the father or grandfather of the Godfather in the present one.

You can, in fact, buy a family tree at the box-office, but this is not a very good idea. If you knew who was who before you saw the film, you would miss all the turgid fun of working it out for yourself. Not that you should be expected to work as hard as all that in the cinema. But if you dodge this particular intellectual exercise, there is not much left to enjoy.

Except, perhaps, the settings. The backgrounds for Little Italy are almost too well done. The director had a whole New York block transformed into a turn-of-thecentury Italian ghetto, using existing shop-fronts. The result looks too real to be true. And whenever a rare vintage vehicle crosses the set it does so self-consciously. You half expect to see a man going in front with a flag bearing the message: 'This is a rare vintage vehicle.'

Performances? Al Pacino plays the Godfather — or underplays him. With just the right kind of eyes', said the girl next to me. And it's true that he does do a lot of sitting about, just allowing those splendid orbs to be completely themselves. Diane Keaton plays Mrs Godfather — or overplays her. But her one tremendously melodramatic scene hardly seems to belong to this fairly quiet film. Nor does the small comic scene in which a Mafia man plays at Robin Hood, stealing from a landlord to pay his tenant.

Just for once I longed for a little more violence. The whole picture is much too restrained. Even the subtlety is too subtle. I know, of course, that we are supposed to discover echoes of the Mafia in American business and politics. But I found myself too busy sorting out the plot to ferret about for overtones. And because I gave up the struggle quite soon, I was glad there were so many memorable images in the film. Like the crowd on the lawns at a Lake Tahore communion party; a ballroom scene done as impeccably in black and white as much of At Long Last Love, and a limp, defected man sprawled in front of a plate-glass window on an equally limp and dejected modern chairm There are, in fact, a great many good things to look at in the film. But they don't add up to anything very impressive. I came/ away with the feeling I had been shown somebody's family-snapshot album with all the pictures pasted up in the wrong order.