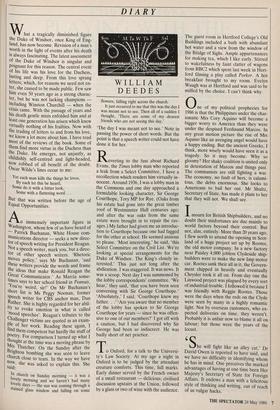 What a tragically diminished figure the Duke of Windsor, once King of Eng- land, has now become. Revision of a man's worth in the light of events after his death is always fascinating. The latest assessment of the Duke of Windsor is singular and poignant for this reason. The central event of his life was his love for the Duchess, lasting and deep. From this love sprang letters; which, for reasons we need not en- ter, she caused to be made public. Few saw him even 50 years ago as a strong charac- ter, but he was not lacking champions including Winston Churchill — when the crisis came. With the passage of years and his death gentle mists enfolded him and at least one generation has arisen which knew virtually nothing of his frailties. Now with the trading of letters to and from his love, we know a lot more about him. I have read most of the reviews of the book. Some of them find more virtue in the Duchess than the Duke. He emerges, not unjustly, as childishly self-centred and light-headed, now robbed of all benefit of the doubt. Oscar Wilde's lines occur to me:

Yet each man kills the things he loves, By each let this be heard, Some do it with a bitter look, Some with a flattering word.. .

But that was written before the age of Equal Opportunities.

An immensely important figure in Washington, whom few of us have heard of — Patrick Buchanan, White House com- munications director — seeks a new direc- tor of speech writing for President Reagan. Not a speech writer, mark you, but a direc- tor of other speech writers. 'Rhetoric moves policy,' says Mr Buchanan, 'and these writers provide the words and frame the ideas that make Ronald Reagan the Great Communicator.' As Marcia some- times says to her school friend in Peanuts, You're weird, sir!' On Mr Buchanan's short list is Ms Peggy Noonan, former speech writer for CBS anchor man, Dan Rather. She is highly regarded for her abil- ity to evoke emotion in what is called mood speeches'. Reagan's tributes to the Challenger victims are quoted as an exam- ple of her work. Reading these again, I find them competent but hardly the stuff of poetry. For comparison I turned up what I thought at the time was a moving phrase by Mrs Thatcher. On the Sunday after the Brighton bombing she was seen to leave church close to tears. In the way we have now, she was asked to explain this. She said:

flowers, falling right across the church.

It just occurred to me that this was the day I was meant not to see. Then all of a sudden I thought, 'There are some of my dearest friends who are not seeing this day.'

`The day I was meant not to see.' Note in passing the power of short words. But the point is that a speech writer could not have done it for her.

Reverting to the fuss about Richard Evans, the Times lobby man who reported a leak from a Select Committee, I have a recollection which renders him virtually in- nocent. Around 1936, I was a lobby man in the Commons and one day approached a formidable looking character, Sir George Courthope, Tory MP for Rye. (Oaks from his estate had gone into the great timber roof of Westminster Hall centuries ago; and after the war oaks from the same estate were brought in to repair the rav- ages.) My father had given me an introduc- tion to Courthope because one had fagged for the other at school. He seemed anxious to please. 'Most interesting,' he said, 'this Select Committee on the Civil List. We're looking at special arrangements for the Duke of Windsor. The King's closely in- terested.' This just not long after the abdication. I was staggered. It was news. It was a scoop. Next day I was summoned by the lobby correspondents' committee. 'We hear,' they said, 'that you have been seen conversing with Sir George Courthope.' `Absolutely,' I said. `Courthope knew my father. . ."Are you aware that no member of the lobby has spoken to Sir George Courthope for years — since he was offen- sive to one of our members?' I got off with a caution, but I had discovered why Sir George had been so indiscreet. He was badly short of net practice.

To Oxford, for a talk to the Universi- ty's Law Society. At my age a night in Oxford is to be judged by the attendant creature comforts. This time, full marks. Early dinner served by the French owner of a small restaurant — delicious; civilised discussion upstairs at the Union, followed by a glass or two of wine with the audience. The guest room in Hertford College's Old Buildings included a bath with abundant hot water and a view from the window of the Bridge of Sighs. Ample appurtenances for making tea, which I like early. Stirred to wakefulness by faint clatter of wagons from BBC2 which spent last week in Hert- ford filming a play called Porker. A hot breakfast brought to my room. Evelyn Waugh was at Hertford and was said to be miffed by the choice. I can't think why.

0 ne of my political prophecies for 1986 is that the Philippines under the char- ismatic Mrs Cory Aquino will become a bigger worry to America than they were under the despised Ferdinand Marcos. In any great motion picture the rise of Mrs Aquino like an avenging angel would have a happy ending. But the ancient Greeks, I think, more wisely would have seen it as a tragedy. So it may become. Why so gloomy? Her shaky coalition is united only in detestation of Marcos and things past. The communists are still fighting a war. The economy, no fault of hers, is calami- tous, the debts enormous. She looks to Americans to bail her out. Mr Shultz, Secretary of State, has made it plain to her that they will not. We shall see.

Imourn for British Shipbuilders, and no doubt their misfortunes are due mainly to world factors beyond their control. But not, alas, entirely. More than 20 years ago, I flew north to attend the opening in Scot- land of a huge project set up by Rootes, the old motor company. In a new factory near Paisley 4,000 jobless Clydeside ship- builders were to make the new Imp motor car. Rootes sank their all in it, the Govern- ment chipped in heavily and eventually Chrysler took it all on. From day one the Linwood project was plagued by every sort of industrial trouble. I followed it because I was friendly with Reggie Rootes. Those were the days when the reds on the Clyde were seen by many in a highly romantic light. Not by overseas customers, who ex- pected deliveries on time, they weren't.

Probably it is unfair now to blame it all on labour; but those were the years of the locust.

She will fight like an alley cat,' Dr David Owen is reported to have said, and we have no difficulty in identifying whom he has in mind. One perceives the marked advantages of having at one time been Her Majesty's Secretary of State for Foreign Affairs. It endows a man with a felicitous style of thinking and writing, out of reach of us vulgar hacks.