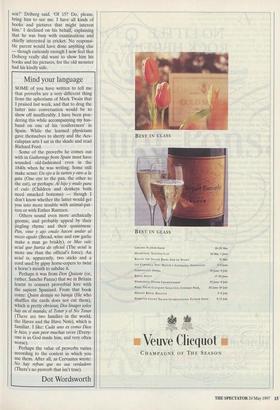 SOME of you have written to tell me that proverbs are a very different thing from the aphorisms of Mark Twain that I praised last week, and that to drag the latter into conversation would be to show off insufferably. I have been pon- dering this while accompanying my hus- band on one of his 'conferences' in Spain. While the learned physicians gave themselves to sherry and the Aes- culapian arts I sat in the shade and read Richard Ford.

Some of the proverbs he comes out with in Gatherings from Spain must have sounded old-fashioned even in the 1840s when he was writing. Some still make sense: Un ojo a la sarten y otro a la gata (One eye to the pan, the other to the cat), or perhaps: Al hijo y mulo para el cub o (Children and donkeys both need smacked bottoms) — though I don't know whether the latter would get you into more trouble with animal-pat- ters or with Esther Rantzen.

Others sound even more archaically gnomic, and probably appeal by their jingling rhyme and their quaintness: Pan, vino y ajo crud° hacen andar at mozo agudo (Bread, wine and raw garlic make a man go briskly), or Mas vale acial que fuerza de oficial (The acial is more use than the official's force). An acial is, apparently, two sticks and a cord used by gipsy horse-copers to twist a horse's mouth to subdue it.

Perhaps it was from Don Quixote (or, rather, Sancho Panza) that we in Britain learnt to connect proverbial lore with the sapient Spaniard. From that book come: Quien destaja no baraja (He who shuffles the cards does not cut them), which is pretty obvious; Dos IMages solos hay en el mundo, el Tener y el No Tener (There are two families in the world, the Haves and the Have Nots), which is familiar. I like: Cada uno es como Dios le hizo, y aun peor muchas veces (Every- one is as God made him, and very often worse).

Perhaps the value of proverbs varies according to the context in which you use them. After all, as Cervantes wrote: No hay refran que no sea verdadero (There's no proverb that isn't true).