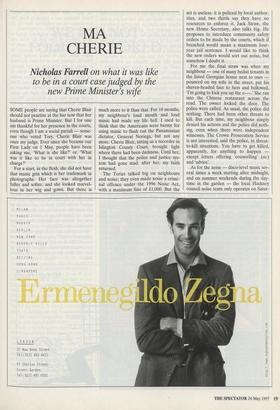 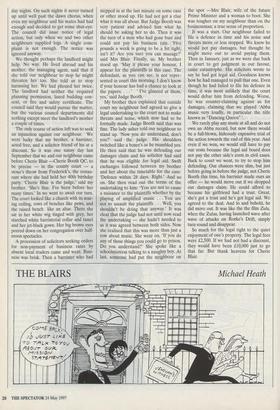 SOME people are saying that Cherie Blair should not practise at the bar now that her husband is Prime Minister. But I for one am thanlcful for her presence in the courts, even though I am a social pariah — some- one who voted Tory. Cherie Blair was once my judge. Ever since she became our First Lady on 1 May, people have been asking me, 'What is she like?' or, 'What was it like to be in court with her in charge?'

For a start, in the flesh, she did not have that manic grin which is her trademark in photographs. Her face was altogether fuller and softer, and she looked marvel- lous in her wig and gown. But there is much more to it than that. For 18 months, my neighbour's loud mouth and loud music had made my life hell. I used to think that the Americans were barmy for using music to flush out the Panamanian dictator, General Noriega, but not any more. Cherie Blair, sitting as a recorder in Islington County Court, brought light where there had been darkness. Until her, I thought that the police and justice sys- tern had gone mad; after her, my faith returned.

The Tories talked big on neighbours and noise; they even made noise a crimi- nal offence under the 1996 Noise Act, with a maximum fine of £1,000. But the act is useless: it is policed by local author- ities, and two thirds say they have no resources to enforce it. Jack Straw, the new Home Secretary, also talks big. He proposes to introduce community safety orders to be made by the courts, which if breached would mean a maximum four- year jail sentence. I would like to think the new orders would sort out noise, but somehow I doubt it.

For me the final straw was when my neighbour — one of many bedsit tenants in the listed Georgian house next to ours — pounced on my wife in the street, put his shaven-headed face to hers and bellowed, 'I'm going to kick you up the c—.' She ran into the Chinese restaurant across the road. The owner locked the door. The police were called. As usual, the police did nothing. There had been other threats to kill. But each time, my neighbour simply denied his actions and the police did noth- ing, even when there were independent witnesses. The Crown Prosecution Service is not interested, said the police, in threat- to-kill situations. You have to get killed, apparently, for anything to happen — except letters offering `councelling' (sic) and 'advice'.

As for the noise — disco-level music sev- eral times a week starting after midnight, and on summer weekends during the day- time in the garden — the local Hackney council noise team only operates on Satur- day nights. On such nights it never turned up until well past the dawn chorus, when even my neighbour and his mates had had enough and decided to get some shut-eye. The council did issue notice of legal action, but only when we and two other neighbours supplied logs. A single com- plaint is not enough. The notice was ignored anyway.

We thought perhaps the landlord might help. No way. He lived abroad and his mother, the managing agent, said that if she told our neighbour to stop he might threaten her too. She told us to stop harassing her. We had phoned her twice. The landlord had neither the required planning permission, listed building con- sent, or fire and safety certificate. The council said they would pursue the matter, but the various council departments did nothing except meet the landlord's mother a couple of times.

The only course of action left was to seek an injunction against our neighbour. We were lucky that my brother, a barrister, acted free, and a solicitor friend of his at a discount. So it was one sunny day last September that we and our neighbour came before Cherie Blair —Cherie Booth QC, to be precise — in the county court — a stone's throw from Frederick's, the restau- rant where she had held her 40th birthday party. 'Cherie Blair is the judge,' said my brother. 'She's fine. I've been before her many times.' In we went to await our turn. The court looked like a church with its soar- ing ceiling, rows of benches like pews, and the raised bench like an altar. There she sat in her white wig tinged with grey, her starched white barristerial collar and tassel and her jet-black gown. Her big brown eyes peered down on her congregation over half- moon spectacles.

A procession of solicitors seeking orders for non-payment of business rates by absent local traders came and went. Busi- ness was brisk. Then a barrister who had stepped in at the last minute on some case or other stood up. He had not got a clue what it was all about. But Judge Booth was very patient and advised him what he should be asking her to do. Then it was the turn of a man who had gone bust and could not pay his business rate. 'Five pounds a week is going to be a bit tight, isn't it? Are you sure you can manage?' said Mrs Blair. Finally, us. My brother stood up. 'May it please your honour, I appear for the plaintiffs in this case. The defendant, as you can see, is not repre- sented in court this morning. I don't know if your honour has had a chance to look at the papers. . . . " I've glanced at them, yes,' said Judge Booth.

My brother then explained that outside court my neighbour had agreed to give a legal undertaking to the court not to make threats and noise, which now had to be formally made. Judge Booth said that was fine. The lady usher told our neighbour to stand up. 'Now you do understand, don't you?' said the judge. His shoulders twitched like a boxer's as he mumbled yes. He then said that he was defending our damages claim and his solicitor had said that he was eligible for legal aid. Swift exchanges followed between my brother and her about the timetable for the case: 'Defence within 28 days. Right.' And so on. She then read out the terms of the undertaking to him: 'You are not to cause a nuisance to the plaintiffs whether by the playing of amplified music . . . You are not to assault the plaintiffs . . . Well, you shouldn't be doing that anyway.' It was clear that the judge had not until now read the undertaking — she hadn't needed to as it was agreed between both sides. Now she realised that this was more than just a row about music. She went on, 'If you do any of these things you could go to prison. Do you understand?' She spoke like a schoolmistress talking to a naughty boy. At last, someone had put the neighbour on the spot —Mrs Blair, wife of the future Prime Minister and a woman to boot. She was tougher on my neighbour than on the businessman; a true sense of proportion.

It was a start. Our neighbour failed to file a defence in time and his noise and threats more or less stopped. We knew he would not pay damages, but thought he might move out to avoid paying them. Then in January, just as we were due back in court to get judgment in our favour, came catastrophe. His solicitors wrote to say he had got legal aid. Goodness knows how he had managed to pull that one. Even though he had failed to file his defence in time, it was most unlikely that the court would debar him from defending. Worse, he was counter-claiming against us for damages, claiming that we played Abba music very loudly, in particular the title known as "Dancing Queen" '.

We rarely play any music at all and do not own an Abba record, but now there would be a full-blown, hideously expensive trial of the action towards the end of this year. And even if we won, we would still have to pay our costs because the legal aid board does not pay the other side's costs in civil cases. Back to court we went, to try to stop him defending. Our chances were slim, but just before going in before the judge, not Cherie Booth this time, his barrister made ours an offer — he would move out if we dropped our damages claim. He could afford to because his girlfriend had a trust. Great, she's got a trust and he's got legal aid. We agreed to the deal. And lo and behold, he did move out. It was like the the film Zulu, when the Zulus, having launched wave after wave of attacks on Rorke's Drift, simply turn round and disappear.

So much for the legal right to the quiet enjoyment of one's property. The legal fees were £2,500. If we had not had a discount, they would have been £10,000 just to go that far. But thank heavens for Cherie Blair.