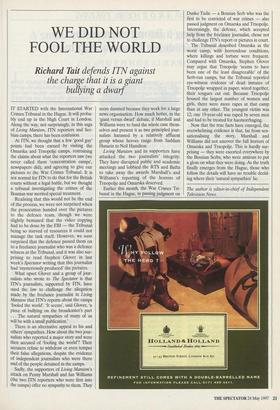 WE DID NOT FOOL THE WORLD

Richard Tait defends ITN against the charge that it is a giant bullying a dwaif IT STARTED with the International War Crimes Tribunal in the Hague. It will proba- bly end up in the High Court in London. Along the way, not surprisingly, in this saga of Living Marxism, ITN reporters and Ser- bian camps, there has been confusion.

At ITN, we thought that a few 'good guy' points had been earned by visiting the Omarska and Trnopolje camps, restraining the claims about what the reporters saw (we never called them 'concentration camps', newspapers did), and agreeing to give our pictures to the War Crimes Tribunal. It is not normal for ITN to do that for the British courts without a legal battle, but we thought a tribunal investigating the crimes of the Bosnian war merited special treatment.

Realising that this would not be the end of the process, we were not surprised when the prosecution handed over the pictures to the defence team, though we were slightly bemused that the video copying had to be done by the FBI — the Tribunal being so starved of resources it could not manage the task itself. However, we were surprised that the defence passed them on to a freelance journalist who was a defence witness at the Tribunal, and it was also sur- prising to read Stephen Glover in last week's Spectator writing that this journalist had 'mysteriously produced' the pictures.

What upset Glover and a group of jour- nalists who wrote to The Spectator is that ITN's journalists, supported by ITN, have used the law to challenge the allegation made by the freelance journalist in Living Marxism that ITN's reports about the camps 'fooled the world'. 'It seems', said Glover, 'a piece of bullying on the broadcaster's part . . The natural sympathies of many of us will be with a small publication.'

There is an alternative appeal to his and others' sympathies. How about the two jour- nalists who reported a major story and were then accused of 'fooling the world'? Their accusers refuse to withdraw or even temper their false allegations, despite the evidence of independent journalists who were there and of the people detained in the camps.

Sadly, the supporters of Living Marxism's attack on Penny Marshall and Ian Williams (the two ITN reporters who were first into the camps) offer no sympathy to them. They seem damned because they work for a large news organisation. How much better, in the 'giant versus dwarf' debate, if Marshall and Williams were to fund the whole case them- selves and present it as two principled jour- nalists harassed by a relatively affluent group whose heroes range from Saddam Hussein to Neil Hamilton.

Living Marxism and its supporters have attacked the two journalists' integrity. They have disrupted public and academic meetings and lobbied the RTS and Bafta to take away the awards Marshall's and Williams's reporting of the horrors of Trnopolje and Omarska deserved.

Earlier this month, the War Crimes Tri- bunal in the Hague, in passing judgment on Dusko Tadic — a Bosnian Serb who was the first to be convicted of war crimes — also passed judgment on Omarska and Trnopolje. Interestingly, the defence, which accepted help from the freelance journalist, chose not to challenge ITN's report or pictures in court.

The Tribunal described Omarska as the worst camp, with horrendous conditions, where killings and torture were frequent. Compared with Omarska, Stephen Glover may argue that Trnopolje 'seems to have been one of the least disagreeable' of the Serb-run camps, but the Tribunal reported eye-witness evidence of dead inmates of Trnopolje wrapped in paper, wired together, their tongues cut out. Because Trnopolje housed the largest number of women and girls, there were more rapes at that camp than at any other. The youngest victim was 12; one 19-year-old was raped by seven men and had to be treated for haemorrhaging.

Now that the true facts have emerged, the overwhelming evidence is that, far from sen- sationalising the story, Marshall and Williams did not uncover the full horrors of Omarska and Trnopolje. This is hardly sur- prising — they were escorted everywhere by the Bosnian Serbs, who were anxious to put a gloss on what they were doing. As the truth finally emerges from the Hague, those who follow the details will have no trouble decid- ing where their 'natural sympathies' lie.

The author is editor-in-chief of Independent Television News.