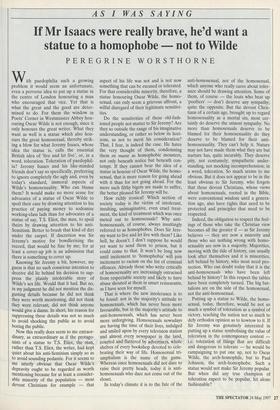 AS I WAS SAYING

If Mr Isaacs were really brave, he'd want a statue to a homophobe — not to Wilde

With paedophilia such a growing problem it would seem an unfortunate, even a perverse idea to put up a statue in the centre of London honouring a man who encouraged that vice. Yet that is what the great and the good are deter- mined to do. For them the window in Poets' Corner in Westminster Abbey hon- ouring Oscar Wilde is not enough, since it only honours the great writer. What they want as well is a statue which also hon- ours the great homosexual, thereby strik- ing a blow for what Jeremy Isaacs, whose idea the statue is, calls the essential British idea of 'live and let live', or, in a word, toleration. Toleration of paedophil- ia? Jeremy Isaacs and his like-minded friends don't say so specifically, preferring to ignore completely the ugly and, even by today's standard, immoral aspects of Wilde's homosexuality. Who can blame them? It would make no more sense for advocates of a statue of Oscar Wilde to spoil their case by drawing attention to his practice of paying money to sodomise working-class lads than for advocates of a statue of say, T.S. Eliot, the man, to spoil theirs by drawing attention to his anti- Semitism. Better to brush that kind of dirt under the carpet. If discretion was Sir Jeremy's motive for bowdlerising the record, that would be fine by me; for at least a cover-up job is an admission that there is something to cover up.

Knowing Sir Jeremy a bit, however, my guess is that no such conscious intention to deceive did lie behind his decision to sup- press the plainly intolerable story of Wilde's sex life. Would that it had. But no, in my judgment he did not mention the dis- gusting details because he did not think they were worth mentioning, did not think they were relevant, did not think anyone would give a damn. In short, his reason for suppressing these details was not so much to avoid shocking the public as to avoid boring the public.

.Now this really does seem to me extraor- dinary, as extraordinary as if the protago- nists of a statue to T.S. Eliot, the man, rather than T.S. Eliot, the writer, had kept quiet about his anti-Semitism simply so as to avoid sounding pedantic. For it seems to me utterly obvious that Oscar Wilde's depravity ought to be regarded as worth mentioning because for at least a consider- able minority of the population — most devout Christians for example — that aspect of his life was not and is not now something that can be excused or tolerated. For that considerable minority, therefore, a statue honouring Oscar Wilde, the homo- sexual, can only seem a grievous affront, a wilful disregard of their legitimate sensitivi- ties.

Do the sensitivities of these old-fash- ioned people not matter to Sir Jeremy? Are they so outside the range of his imaginative understanding, or rather so below its hori- zons, as not to merit his consideration? That, I fear, is indeed the case. He hates the very thought of them, condemning them en masse as homophobic monsters, not only beneath notice but beneath con- tempt. If they cannot bear the idea of a statue in honour of Oscar Wilde, the homo- sexual, that is more reason for going ahead with it than for not going ahead. For the more such filthy bigots are made to suffer, the better pleased Sir Jeremy will be. How richly ironical! Which section of society today is the victim of intolerant, insulting, unimaginative, even cruel treat- ment, the kind of treatment which was once meted out to homosexuals? Why anti- homosexuals, of course, always insultingly referred to as homophobes. Does Sir Jere- my want to live and let live with them? Like hell, he doesn't. I don't suppose he would yet want to send them to prison, but it could come to that. It won't be long now until incitement to 'homophobia' will join incitement to racism on the list of criminal offences. Already those who write critically of homosexuality are increasingly ostracised from respectable society and likely to have abuse shouted at them in smart restaurants, as I have seen for myself.

That is where the new intolerance is to be found: not in the majority's attitude to homosexuals, which has never been more favourable, but in the majority's attitude to anti-homosexuals, which has never been more unforgiving. Homosexuals nowadays are having the time of their lives, indulged and smiled upon by every television station and almost every newspaper in the land, courted and flattered by advertisers, whole shelves of every bookshop devoted to cele- brating their way of life. Homosexual tri- umphalism is the name of the game. Whereas once homosexuals did not dare to raise their pretty heads, today it is anti- homosexuals who dare not come out of the closet.

In today's climate it is to the fate of the anti-homosexual, not of the homosexual, which anyone who really cares about toler- ance should be drawing attention. Some of them, of course — the louts who beat up `poofters' — don't deserve any sympathy; quite the opposite. But the devout Chris- tians of a certain age, brought up to regard homosexuality as a mortal sin, most cer- tainly do deserve the utmost sympathy. No more than homosexuals deserve to be blamed for their homosexuality do they deserve to be blamed for their anti- homosexuality. They can't help it. Nature may not have made them what they are but nurture has, quite incurably. They deserve pity, not contumely; sympathetic under- standing, not mocking incomprehension; in a word, toleration. So much seems to me obvious. But it does not appear to be in the least obvious to Sir Jeremy, who forgets that these devout Christians, whose views about homosexuals, rooted in the Bible, were conventional wisdom until a genera- tion ago, also have rights that need to be protected and principles that need to be respected.

Indeed, the obligation to respect the feel- ings of those who take the Christian view becomes all the greater if — as Sir Jeremy believes — they are now a minority and those who see nothing wrong with homo- sexuality are now in a majority. Majorities, moving with the tide of history, can usually look after themselves and it is minorities, left behind by history, who most need pro- tection. Who can doubt today that it is the anti-homosexuals who have been left behind by history? In this respect the tables have been completely turned. The big bat- talions are on the side of the homosexual, not the anti-homosexual.

Putting up a statue to Wilde, the homo- sexual, today, therefore, would be not so much a symbol of toleration as a symbol of victory, teaching the nation not so much to defy orthodox opinion as to kowtow to it. If Sir Jeremy was genuinely interested in putting up a statue symbolising the value of toleration in the contemporary context — i.e. toleration of things that are difficult and dangerous to tolerate — he would be campaigning to put one up, not to Oscar Wilde, the arch-homophile, but to Paul Johnson, the arch-homophobe. Such a statue would not make Sir Jeremy popular. But when did any true champion of toleration expect to be popular, let alone fashionable?