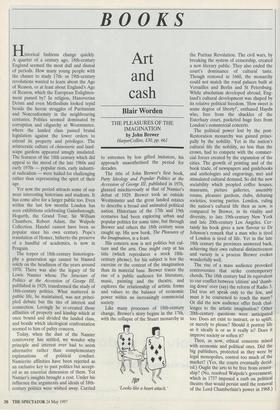 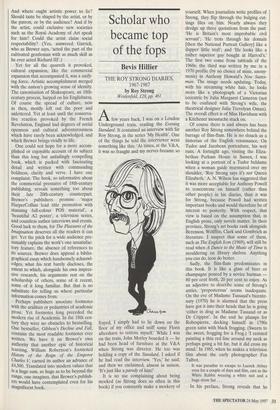 THE PLEASURES OF THE IMAGINATION by John Brewer HarperCollins, £30, pp. 661 Historical fashions change quickly. A quarter of a century ago, 18th-century England seemed the most dull and dismal of periods. How many young people with the chance to study 17th- or 19th-century revolutions wanted to learn about the Age of Reason, or at least about England's Age of Reason, which the European Enlighten- ment passed by? In religion, Hanoverian Deism and even Methodism looked tepid beside the heroic struggles of Puritanism and Nonconformity in the neighbouring centuries. Politics seemed dominated by corruption and oligarchy at Westminster, where the landed class passed brutal legislation against the lower orders to extend its property and privileges. The aristocratic culture of chinoiserie and land- scape gardens appeared smugly insulated. The features of the 18th century which did appeal to the mood of the late 1960s and early 1970s — popular riots, early industri- al radicalism — were hailed for challenging rather than representing the spirit of their age.

Yet now the period attracts some of our most interesting historians and students. It has come alive for a larger public too. Even within the last few months London has seen exhibitions celebrating Gainsborough, Hogarth, the Grand Tour, Sir William Chambers, Robert Adam, the Walpole Collection. Handel cannot have been so popular since his own century. Pope's translation of Homer, hitherto the preserve of a handful of academics, is now in Penguin.

The torpor of 18th-century historiogra- phy a generation ago cannot be blamed solely on the headiness of the years around 1970. There was also the legacy of Sir Lewis Namier whose The Structure of Politics at the Accession of George III, published in 1929, transformed the study of 18th-century politics. What mattered in public life, he maintained, was not princi- pled debate but the ties of interest and connection. Lovingly he re-created those affinities of property and kinship which at once bound and divided the landed class, and beside which ideological confrontation seemed to him of paltry concern.

Today, when the dust of the Namier controversy has settled, we wonder why principle and interest ever had to seem alternative rather than complementary explanations of political conduct. Namierite affinities have been rejected as an exclusive key to past politics but accept- ed as an essential dimension of them. Yet Namier's insights brought a cost. Under his influence the arguments and ideals of 18th- century politics were wished away. Carried to extremes by less gifted imitators, his approach anaesthetised the period for decades.

The title of John Brewer's first book, Party Ideology and Popular Politics at the Accession of George III, published in 1976, glanced mischievously at that of Namier's debut of 1929. Brewer took us outside Westminster and the great landed estates to describe a broad and animated political nation. Historians of the 17th and 19th centuries had been exploring urban and popular politics for some time, but through Brewer and others the 18th century soon caught up. His new book, The Pleasures of the Imagination, is a feast. His concern now is not politics but cul- ture and the arts. One might carp at his title (which reproduces a stock 18th- century phrase), for his subject is less the exercise or the content of the imagination than its material base. Brewer traces the rise of a public audience for literature, music, painting and the theatre, and explores the relationship of artistic forms and values to the balance of economic power within an increasingly commercial society.

Like many processes of 18th-century change, Brewer's story begins in the 17th, with the collapse of the Stuart monarchy in 'Looks like a heart attack' the Puritan Revolution. The civil wars, by breaking the system of censorship, created a new literary public. They also ended the court's dominance of cultural taste. Though restored in 1660, the monarchy could not match the royal palaces built at Versailles and Berlin and St Petersburg. While absolutism developed abroad, Eng- land's cultural development was shaped by its relative political freedom. 'How sweet is some degree of liberty!', enthused Haydn who, free from the shackles of the Esterhazy court, pocketed huge fees from London's commercial concerts.

The political power lost by the post- Restoration monarchy was gained princi- pally by the nobility. Yet in the nation's cultural life the nobility, no less than the crown, had to compete with the commer- cial forces created by the expansion of the cities. The growth of printing and of the book trade, of newspapers and guidebooks and anthologies and engravings, met and stimulated cultural demand. So did the new sociability which peopled coffee houses, museums, picture galleries, assembly rooms, pleasure gardens, clubs, debating societies, touring parties. London, ruling the nation's cultural life then as now, is compared by Brewer, in its vitality and diversity, to late 19th-century New York and late 20th-century Los Angeles. Cer- tainly his book gives a new flavour to Dr Johnson's remark that a man who is tired of London is tired of life. Yet in the late 18th century the provinces answered back, achieving their own cultural distinctiveness and variety in a process Brewer evokes wonderfully well.

The rise of a mass audience provoked controversies that strike contemporary chords. The 18th century had its equivalent to our conflict between 'elitism' and `dumb- ing down' over (say) the reform of Radio 3. Did true art speak only to the few, and must it be coarsened to reach the many? Or did the new audience offer fresh chal- lenges to the artistic imagination? Other 20th-century questions were anticipated too. Does art exist to instruct, or to uplift, or merely to please? Should it portray life as it ideally is or as it really is? Does it improve society or soften it?

Then, as now, ethical concerns mixed with economic and political ones. Did the big publishers, protected as they were by legal monopolies, control too much of the market? (Yes, the courts eventually decid- ed.) Ought the arts to be free from censor- ship? (No, resolved Walpole's government, which in 1737 imposed a curb on political theatre that would persist until the removal of the Lord Chamberlain's power in 1968.) And where ought artistic power to lie? Should taste be shaped by the artist, or by the patron, or by the audience? And if by the artist, could exclusive new societies such as the Royal Academy of Art speak for him? Could the artist claim social respectability? (Yes, answered Garrick, who as Brewer says, `acted the part of the cultivated gentleman with as much skill as he ever acted Richard III') Yet for all the quarrels it provoked, cultural expansion, like the commercial expansion that accompanied it, was a unify- ing force. Artistic accomplishment merged with the nation's growing sense of identity. The canonisation of Shakespeare, an 18th- century process, harped on his Englishness. Of course the spread of culture, now as then, mostly left out the poor and unlettered. Yet at least until the conserva- tive reaction provoked by the French Revolution, England had degrees of social openness and cultural adventurousness which have rarely been acknowledged, and which Brewer brings vividly to life.

One could not hope for a more accom- plished or enjoyable account of its subject than this long but unfailingly compelling book, which is packed with fascinating detail and written with commanding boldness, clarity and verve. I have one complaint. The book, so informative about the commercial pressures of 18th-century publishing, reveals something too about their late 20th-century counterpart. Brewer's publishers promise 'major HarperCollins lead title promotion with stunning full-colour POS material', a 'beautiful Al poster', a television series, and countless author interviews and events. Good luck to them, for The Pleasures of the Imagination deserves all the readers it can get. Yet the pitch for a wide audience pre- sumably explains the work's one unsatisfac- tory feature, the absence of references to its sources. Brewer does append a biblio- graphical essay which handsomely acknowl- edges, what his text barely discloses, the extent to which, alongside his own impres- sive research, his arguments rest on the scholarship of others, some of it recent, some of it long familiar. But that is no substitute for telling us where particular information comes from.

perhaps publishers associate footnotes With the aridities or pedantries of academic Prose. Yet footnotes long preceded the modern rise of Academia. In the 18th cen- tury they were no obstacles to bestselling. One bestseller, Gibbon's Decline and Fall, contains the most readable footnotes ever written. We have it on Brewer's own authority that another epic of historical learning, William Robertson's footnoted History of the Reign of the Emperor Charles V, earned its author an advance of £4,500. Translated into modern values that is a huge sum, so huge as to be beyond the range, one imagines, that Brewer's publish- ers would have contemplated even for his magnificent book.