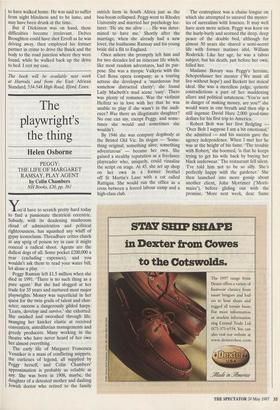 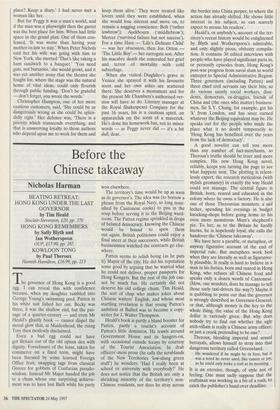 The playwright's the thing

PEGGY: THE LIFE OF MARGARET RAMSAY, PLAY AGENT by Colin Chambers NH Books, £20, pp. 361 You'd have to scratch pretty hard today to find a passionate theatrical eccentric. Subsidy, with its deadening mushroom cloud of administration and political righteousness, has squashed any whiff of gypsy iconoclasm. Threadbare critics clutch at any sprig of poison ivy in case it might conceal a radical shoot. Agents are the dullest dogs of all. Some pocket £200,000 a year (excluding expenses), and you wouldn't ask them to read your water bill, let alone a play.

Peggy Ramsay left £1.5 million when she died in 1991. 'There is no such thing as a pure agent.' But she had slogged at her trade for 35 years and nurtured most major playwrights. Money was superficial in her quest for the twin grails of talent and char- acter; success a dangerously gilded harpy. 'Learn, develop and survive,' she exhorted. She swished and swooshed through life, twanging her knicker elastic at received convention, antediluvian managements and greedy producers. Many working in the theatre who have never heard of her owe her almost everything.

The early life of Margaret Francesca Venniker is a mass of conflicting snippets, the curlicues of legend, all supplied by Peggy herself, and Colin Chambers' approximation is probably as reliable as any. She was born in 1908, maybe, the daughter of a detested mother and dashing Jewish doctor who retired to the family ostrich farm in South Africa just as the boa-boom collapsed. Peggy went to Rhodes University and married her psychology lec- turer. 'He ate me alive . . . He was deter- mined to have me.' Shortly after the marriage, when she already had a new lover, the loathsome Ramsay and his young bride did a flit to England.

Once ashore she promptly left him and for two decades led an itinerant life which, like most random adventures, had its pur- pose. She was a myopic Valkyrie with the Carl Rosa opera company; as a touring actress she developed a 'murderous but somehow distracted clarity'; she found Lady Macbeth's mad scene 'easy'. There was plenty of romance. Was the violinist Heifetz so in love with her that he was unable to play if she wasn't in the audi- ence? Was there an illegitimate daughter? No one can say, except Peggy, and some- times she would and sometimes she wouldn't.

By 1946 she was company dogsbody at the Bristol Old Vic. Its slogan — 'Some- thing original, something alive, something adventurous' — became her own. She gained a stealthy reputation as a freelance playreader who, uniquely, could visualise the script on stage. At 45, she set up shop on her own in a former brothel off St Martin's Lane with a cat called Rattigan. She would run the office as a cross between a forced labour camp and a high-class club. The centrepiece was a chaise longue on which she attempted to unravel the myster- ies of surrealism with lonesco. It may well have seen more action. Peggy was keen on the hurly-burly and scorned the deep, deep peace of the double bed, although for almost 50 years she shared a semi-secret life with former matinee idol, William Roderick. Like her age, he was a taboo subject, but his death, just before her own, felled her.

Madame Bovary was Peggy's heroine, Schopenhauer her mentor ('We must all live without hope') and Beckett her stoical ideal. She was a merciless judge, quixotic contradictions a part of her maddening allure and political astuteness. 'You're not in danger of making money, are you?' she would warn in one breath and then slip a still ingenue David Hare 2,000 good-time dollars for his first trip to America.

Robert Bolt was her first fledgling — 'Over Bolt I suppose I am a bit emotional,' she admitted — and his success gave the agency independence. When I met her he was at the height of his fame. 'The trouble with Robert,' she boomed, 'is that he keeps trying to get his wife back by buying her black underwear.' The restaurant fell silent. 'I've told him not to be so silly. She's perfectly happy with the gardener.' She then launched into more gossip about another client, John Mortimer (Mord- make% before gliding out with the promise, 'More next week, dear. Same place? Keep a diary.' I had never met a woman like her.

But for Peggy it was a man's world, and if the man was a playwright then the garret was the best place for him. Wives had little space in the grand plan. One of them con- fessed, 'It was worse than having your mother-in-law to stay.' When Peter Nichols told her his wife was going with him to New York, she snorted 'That's like taking a ham sandwich to a banquet.' You need guts, not bursaries,' she would growl, and it was yet another irony that the theatre she fought for, where the stage was the natural home of vital ideas, could only flourish through public funding. 'Don't be grateful — don't forget, you wrote the words.'

Christopher Hampton, one of her more cautious customers, said, 'She could be as dangerously wrong as she could be splen- didly right.' Her defence was, 'There is a priority which transcends everything, and that is unswerving loyalty to those authors who depend upon me to work for them and keep them alive.' They were treated like lovers until they were established, when she would lose interest and move on, to remain a nagging conscience: Bolt ('rather lowbrow'); Ayckbourn ('middlebrow'); Mercer ('survived failure but not success'). For a time Hare — 'Life's Delicate Child' — was her obsession, then Joe Orton — 'The Little Boy' — her surrogate son. After his macabre death she concealed her grief and terror of mortality with cold subterfuge.

When she visited Diaghilev's grave in Venice she sprayed it with his favourite scent and her own ashes are scattered there. She deserves a monument and for the present Mr Chambers's authorised ver- sion will have to do. Literary manager at the Royal Shakespeare Company for the past 16 years, his is a cautious spirit, an apparatchik on the scent of a maverick. He's done his homework but, not to mince words — as Peggy never did — it's a bit dull, dear.