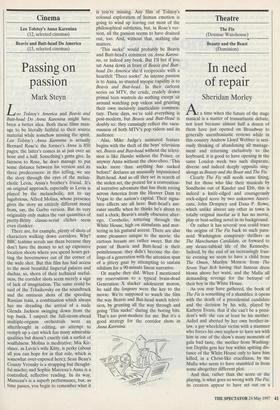 Leo Tolstoy's America and Beavis and Butt-head Do Anna Karenina might have been a better idea. Both these films man- age to be literally faithful to their source material while somehow missing the spirit. Leo Tolstoy's Anna Karenina is actually Bernard Rose's: the former's Anna is 850 pages; the latter's comes in at just over an hour and a half. Something's gotta give. In fairness to Rose, he does manage to put some distance between his version and its three predecessors: in this telling, we see the story through the eyes of the melan- cholic Levin, Anna's brother's friend. It's an original approach, especially as Levin is played by the melancholic, not to say lugubrious, Alfred Molina, whose presence gives the story an entirely different mood from, say, the Garbo version. But its very originality only makes the vast quantities of pretty-Britty classic-serial clichés seem even clunkier.

There are, for example, plenty of shots of characters walking down corridors. Why? BBC teatime serials use them because they don't have the money to set up expensive location shoots where you spend hours get- ting the hovermower out of the corner of the wide shot. But this film has had access to the most beautiful Imperial palaces and dachas, so, shorn of their technical useful- ness, the corridor shots seem merely a sign of lack of imagination. The same could be said of the Tchaikovsky on the soundtrack and the ominous shots of the speeding Russian train, a combination which always has me dreading the arrival of a nude Glenda Jackson swinging down from the top bunk. I suspect the full-steam-ahead multiple-orgasm orchestrals were an afterthought in editing, an attempt to oomph up a cast which has many admirable qualities but doesn't exactly risk a surfeit of soulfulness: Molina is meditative; Mia Kir- shner, as Levin's wife Kitty, is perky (about all you can hope for in that role, which is somewhat over-exposed here); Sean Bean's County Vronslcy is a strapping but thought- ful macho; and Sophie Marceau's Anna is a controlled, reflective reading. In its way, Marceau's is a superb performance, but, as time passes, you begin to remember what it is you're missing. Any film of Tolstoy's colossal exploration of human emotion is going to wind up leaving out most of the philosophical subtleties, but, in Rose's ver- sion, all the passion seems to have drained out, too. And, without that, nothing else matters.

'This sucks!' would probably be Beavis and Butt-head's comment on Anna Karent- na, or indeed any book. But I'll bet if you sat Anna down in front of Beavis and Butt- head Do America she'd reciprocate with a heartfelt `Theez sooks!' As intense passion is to Anna, so stunted myopic vapidity is to Beavis and Butt-head. In their cartoon series on MTV, the crude, crudely drawn primal teen wastrels do nothing except sit around watching pop videos and grunting their own incisively inarticulate commen- tary. These days, we're told everything is post-modern, but Beavis and Butt-Head is doubly so: they cunningly reflect the vacu- ousness of both MTV's pop videos and its audience.

Alas, Mike Judge's animated feature begins with the theft of the boys' television set. Beavis and Butt-head without the televi- sion is like Hamlet without the Prince, or anyway Anna without the choo-choo. 'This sucks more than anything has sucked before!' declares an unusually impassioned Butt-head. And so off they set in search of the stolen set, the pretext for a convention- al narrative adventure that has them roving across America from the Hoover Dam to Vegas to the nation's capital. Their signa- ture effects are all here: Butt-head's ant- eater snuffle when he thinks he's about to nail a chick; Beavis's anally obsessive alter- ego, Cornholio, tottering through the White House, high on stimulants and mut- tering in his guttural accent. There are also some pleasures unique to the movie: the cartoon breasts are rather sweet. But the point of Beavis and Butt-head is their pointlessness: they didn't become the dar- lings of a generation with the attention span of a jittery gnat by attempting to sustain nihilism for a 90-minute linear narrative.

Or maybe they did. When I mentioned my reservations to a typical brain-dead Generation X slacker adolescent moron, he said the longeurs were the key to the movie. We're supposed to watch the film the way Beavis and But-head watch televi- sion, by grunting all the way through and going 'This sucks!' during the boring bits. That's too post-modern for me. But it's a good strategy for the corridor shots in Anna Karenina.