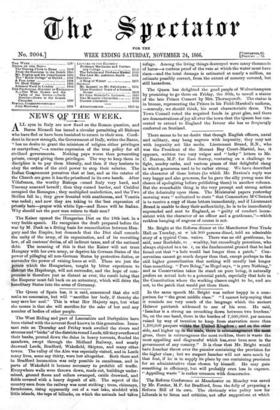 A LL eyes in Italy are now fixed on the Roman question, and

Baron Ricasoli ha.s issued a circular permitting all Bishops who have fled or have been banished to return to their sees. Confi- dent in its new strength, the Government of Itary, writes the Baron, " has no desire to grant the ministers of religion either privileges or martyrdom,"—a concise expression of the true policy for all civilized governments. Nothing pays worse than persecuting priests, except giving them privileges. The way to keep them in discipline is to pay them liberally, and then if they hesitate to obey the orders of the civil power to stop their salaries. The Italian Gosprnment perceives that at last, and as the estates of the Church are gone it has the priesthood in its own. hands. After Villafranca, the worthy Bishops cursed Italy very hard, and Tuscany annexed herself ; then they cursed harder, and Cialdini occupied the Romagna ; they multiplied malediction, and the Two Sicilies fell in ; they grew frenzied with anathemas, and Venetia was eeded ; and now they are taking to the 'last expression of priestly hate—prayer with white lips—and Rome will be Italian. Why should not the poor men return to their sees?