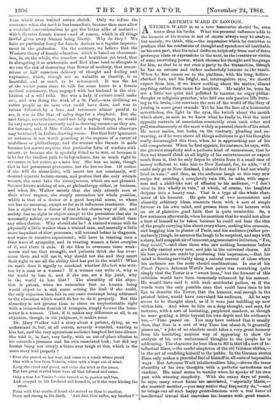 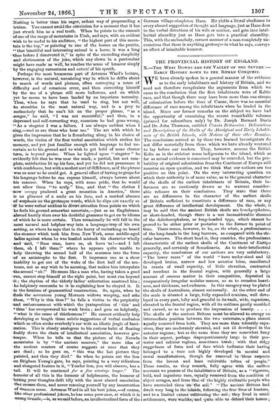 f!A iRTEMUS WARD -is; ,as,a -true ”humtniciat'shotild even -.A. better than -his books. -Whathis personal influence'actdato the humour of his stories is • not of course ,adways 'easy tolerralyze, but mainly, 'we-think, this,'—the impression Whieh contrives to 'produce that hisreon fathom:11:i thong-ha-and lapeechlire allidectitable onhiS ownpart, that his mind' drifts tin heipleAlly frictn'onkof these grotesque ideas or expressions to-thenext;til the bratiitttrelat victim of some overruling power, Winch chOttaes'hiathotightiand language for him, so' that' he is not situ It'partY- to the 'triiiiiittetitini, though he has an earnest and rather 'mela'nehoiyilitireatl inAliereindt. -When he 'first comes On to the platfOrin,:-With \his Llbrig,'hellow- eheeked 'face, and 'his 'bright, 'aid, intertogettire dyes, 'we shciuld expect "hem him, if 'we knew nothing ationt the inatter,' ahiabst anything rather than cause for laughter. '-'.flemight-te, were he not a little:too quiet and 'polished in - timinier,'an eager philan- thropist or religious Breather,- who had one able -passion' left' burn- ing in his brain,to convince the rest -Of the WOrld Ortfeliity'of joining in some great 'crusade. 'Yet he has "the face of alinnioinist nevertheless, the 'light in' the eyes, the twitch. about the motith whiCh show, as soon as we know what he really is, that the Most opposite currents Of association constantly cross each 'other and pull simultaneously at the most widely separated chords of his Mind. He never smiles, but looks, on the contrary, pleading and en- treating, as if he were above all things solicitous, to get his thoughts really disentangled this time, when he is approaching one of his odd comparisons. When he first appears, forinstance,hesays, with the greatest simplicity and .a pathetid kind of earnestness, that he does not himself think at all highly of his entertainment or -expect much from it, that he only hopes 'to obtain from it a small-sum of money sufficient • to take him to New7Zealand,lor, he adds, "if I could Only go to New 'Zealand, Ishonld. feel that I hadnOtWholly lived' in vain ;" and then, as the-audience' laugh. at this very-new recipe for avoiding a -completely vain life, he 'adds, with eager- ness and a "child-like sort of . effusion -to- his audience, " I 'don't want to live wholly in vain,' -at which, of comse; the 'laughter deepens into a hearty roar. That is a type of ,theivhole char- acter of his humour. -He 'gets hold of two inconsistent and absurdly arbitrary ideas, connects them with a sort of simple fervour in his own mind, and presses them on his hearers with an air of. plaintive good faith that is -quite irresistible. So, a few sentences afterwards, when he mentions that he would not allow a bust of himself to be taken because he could not bear the idea of the people carrying him about everywhere, making him common, and-hugging him in plaster of Paris, and his audience (rather,pre- Maturely) laugh, he assumes the laugh to be sceptical, and says with a sharp, half snappish air of innotent,argumentative irritation, "Yes, they would,"—and then those who saw nothing humerous before are fully carried away, now, and join in the universal chorue. All his best,points are made by producing this impression,—that his mind is floating inevitably along a natural current of ideas where his audience see the most absurd combinations. In one of his Punch Papers, Artemus Ward's best point was remarking quite simply that the Tovier is a " sweet boon," but the, humour of this criticism would have been immensely enhanced by his manner He would have said it with such accidental pathos, as if the words were the only possible ones that could have risen to his lips to describe the Tower, that the humour, real enough in the printed letter, would have convulsed -his audience. All he says seems to be thought aloud, as if it were just bubbling up new within him. And when he hits on a deep thought, and says,- for instance, with a sort of hesitating, perplexed candour, as though he were . getting a little beyond his own depth bis audience's too,—" Time . passed on. You:thay have noticedthat it usually does, that that is a sort of way Time has aboutit, it, generally passes on," a joke of no absolute merit takesa very,,great humour from his hesitating • anxious way, of appearing 'to show the analysis of his own einbarrassed thOtieds- to the. People. he' is addressing. The character he best hiceite'fiRis thlrofda Sort Orin- tellectual Hans,—the 'model simpleton of the old German. stories,-- in the act of Confiding Iiiihstelf to the 'Public.' In the German stories Hans only Mikes' a practhal fool Of Iffinielf in all Berta Of impossible ways. But ArteMnS'Waid intellectualizes hi n,-shows the inner abstu4ity -Of 'his Own' thoughts' with -a pathetic earnestness 'and Candour. 'His 'mind Seems to wander'when he Speaks'isflis Own past With winning simplicity. With the sunny days( Of youth, he says, many sweet -forroware associated, " especially'Maria,— she married another,—.youinarnetice they-frequently do,"--L-and he brings out all Much- happygetteralistgtions with a real-?leave of intellectual -travail that- convulses hisi-hearers with,good . reason. `Nothing is better than his eager; ardent way of propounding a truism. 'Yoe cannot afold the cedivietion for a moment that it has just struck him as' a' real truth. 'When-he p'oin'ts to the summit • of one of the range of maintains in Utah, and says, with an evident -wish to be useful to his andidne, " the Wiest part of this moun- tain is' the top," or pointing to- one of the horses on the prairie, "'that beautiful and interesting'animal is a hate,- it was a long Alme before I' disolvered it," in' spite of the exceeding siMplicity -and obvionsziess of 'the joke, which any clewn 'in a pantonihne -might have made as 'well, he-reaches the'senSe of htimour simply by the engaging earnestness and natvete' of'his speehh.

Perhaps the most humorous part of Artemus' Ward's lectare; bewever, is the natural,- unresisting way in which he drifts abotit in search of words and phrases, often conveying a sense of difficulty and of conscious error, and then correcting hinfs'elf ' by the use of a 'phrase still more liiclicrous, and On Which yet he seems to have been landed by an imperials tietessity. Thus, When he 'says that he used to -sing, but not well, -he stumbles in the most natural way, and -is a p'r'ey to melancholy that he can't bit On `the proper phrase, " as ' a conger," he said, "I was not Sueeesisful;" and then, in s. depressed and self-correcting Way, 'conscious he had gone wrong, "As- a siugster I was a failure. I am- allvitys' saddest when I ming,--and so are those who hear me." The 'art With Which he tires the impression that. be is floundering' along in his 'choice of words, the victim of the-first -verbal association which Strikes • his memory, and yet just familiar enough with language to feel tin- ' Mertain as to his ground and to-wish to get hold of some clearer term, is beyond praise. When. he lighted upon " singster " he cavidentit felt that he was near the mark,' a 'partial, but not com- plete; satisfaction lit up his fate,'and yet' he did not pronounce it with confidence, but with a niciciest sort Of diffidence, as if the phrase was as near as: he could 'get. A general effect of having totrope for iris language before•he can express himself, slings hoVers about his manner. When he'says, with Some pride, that he would not allow them " to sculp " him, and that " the clothes I mow occupy 'produced a great sensation in America," there is no glimmer of a smile on his face, and a marked absence of emphasis. on the grotesque words, which 'he slips out exactly as if' he were rather at5dbus to divert attention from points on Which ' he feels his ground somewhat uncertain,—just as 'an Englishman abroad hastily slurs Over his doubtful grammar to get onto idioms -of which he is more certain. Then -Occasionally he will fall in the most natural and helpless 'way into a language-trap of his own :setting, as where he says that in the hurry of embarking 'On board the steamer which took him from New York, some middle-aged - ladies against whom he was hustled mistook his character wholly mnd said, "Base Man, leave us, oh leave "Cs 1—and I left them, oh I left them 1" where he appears quite unable to -help throwing the second half of the 'sentence into the form • hof an • antistrophe to the first. It impresses one as a sheer inability to get out 'of the wake of the first half of 'the -sen- tence, not as any:wish to be amusing, that makes him interpolate 'he 'second "oh !" He seems like a man who, having taken a good -van, cannot stop himself at the right point, but must run beyond 'it ; the rhythm of the' eldetly-ladies'' eitiortation mastered him ; he, helplessly succumbs' to it' in expaining how he obeyed it. It is the fatalism Of grammitiear construction. So, again, when 'he finds the seventeen young Mormon widows weeping, • and Mika them, " Why is this thus ?" he falls' a victim to the perpletity and embarrassment withwhieh the juxtaposition of ! this' and 'thus' has overpowered his weak brain ; and goes on helplessly, -"what is the cause of thisthusness?" He cannot evidently help 'developing at length those subtle Suggestions of verbal confusion which so often strike everbody's ear'with an idiotic jingle of fasci- "dation. This is closely analogous to his curious habit of floating feebly down the chain of intellectual association, however • -tesque. When he tells us that the picture of the 'Nevada mountains is by "the ancient masters," the mere idea of the ancient masters of comae suggests at once that they are dead ; so he goes on, " this was the 'last picture they painted, and then they died." So when he points out the lion on Brigham Young's gate, he says, pointing to a very ridiculous and elongated feature in -it, "'Yonder lion, you will observe, has a tail. It will be continued for a- few evenings longer." The humour of all this is the humour of helplessness, the humour of letting your thoughts drift idly:with the most absurd association that crosses them, and never rescuing yourself by any insurrection of 000mon sense. Artemus Ward in -all his best jokes, —of course, like-otter professional jokers, he has some poor ones, at which it is wrong to smile,—is, as we said before, an intellectualized form of the German village-simpleton Hans. He yields a' literal obedience to every absurd suggestion of thought and language, just as Hans does to the verbal directions of his wife or Mother, and gets into intel- lectual absurdity just as Hans gets into a practical absurdity. This, with the melancholy, earnest manner of a man completely Un- conscious that there is anything grotesque in what he says, conveys an 6ffect of inimitable humour.