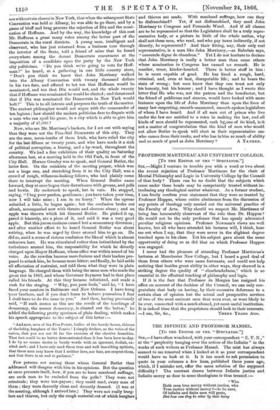 Page 14, 24 November 1866 — PROFESSOR. MARTINEAU AND UNIVERSITY COLLEGE. [To THE EDITOR OF THE
Close

PROFESSOR. MARTINEAU AND UNIVERSITY COLLEGE. [To THE EDITOR OF THE

" SPECTATOR."] SIR,—Might I venture to trouble you with a word or two about the recent rejection of Professor Martineau for the chair of Mental Philosophy and Logic in University College by the Council of that body? There can be no doubt that the subjects which come under these heads may be competently treated without in- troducing any theological matter whatever. As a former student, I can freely confirm your statement that they were so treated by Professor Hoppus, whose entire abstinence from the discussion of any points of theology only carried out the universal practice of the Faculty of Arts. Why should we suspect Mr. Martineau of being less honourably observant of the rule than Dr. Hoppus ? He would not be the only professor that has openly advocated peculiar religious opinions. Professor Newman's views are well known, but all who have attended his lectures will, I think, bear me out when I say, that they were never in the slightest degree touched upon in his class. Yet his subject gave about the same opportunity of doing so as did that on which Professor Hoppus was engaged.

I never had the pleasure of attending Professor Martineau's lectures at Manchester New College, but I heard a good deal of them from others who were more fortunate, and could not help noticing that besides great ability in other ways, they showed in a striking degree the quality of " clearheadedness," which is so essential in the effectual teaching of philosophy and logic.

If it is the fact that Professor de Morgan has resigned his office on account of the decision of the Council, we can only con- gratulate that body on having, by their excessive deference to a certain class of opinion lost the actual and prospective services of two of the most eminent men that were ever, or were likely to be ever, connected with a much abused, yet most useful institution. It is indeed time that the proprietors should look to their interests.