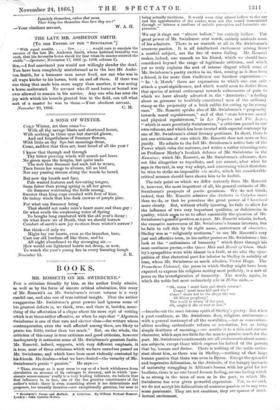 THE LATE MR. ASSHETON SMITH. [TO THE EDITOR OF THE

" With equal results few would care to emulate the success of the late Mr. Assheton Smith, whose habitual brutality was such, that his favourite horse shook for fear when its master entered the stable."—Spectator, November 17, 1866 (p. 1288, column 2).

SIR,—I feel convinced you would not willingly slander the dead. You have been completely misinformed as to the late Mr. Asshe- ton Smith, for a humauer man never lived, nor one who was in all ways kinder to his horses, both on and off them. If there was one thing that made him more angry than another, it was seeing a horse maltreated. No servant who ill used horse or hound was ever allowed to remain in his service. Any one who has seen the joy with which his hounds greeted him in the field, can tell what sort of a master he was to them.—Your obedient servant,