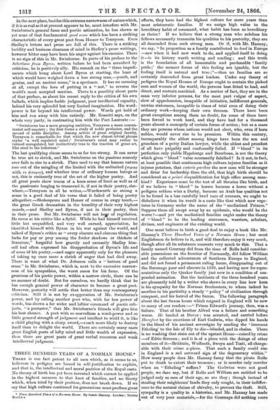 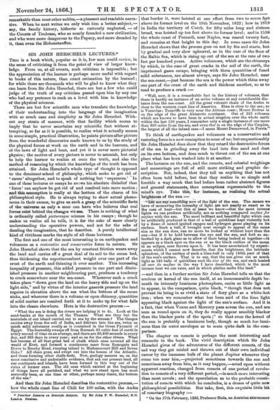 THREE HUNDRED YEARS OF A NORMAN HOUSE.* THERE is one

fact patent to all men which, as it seems to us, believers in pedigree are bound in self-justification to explain, and that is, the intellectual and moral position of the Royal caste. No theory of birth has yet been invented which cannot be applied in the highest measure to that knot of families, and no theory which, when tried by their position, does not break down. If we say that high culture continued for generations must produce great • Three Hundred Tears of a Norman House. By James Hannay. Loudon : Tinsley BrotLe,e. effects, they have had the highest culture for more years than most aristocratic families. If we assign high value to the hereditary habit of command, what habit has been so hereditary as theirs? If we believe that a strong man who subdues his fellows necessarily transmits his qualities to his posterity, they are all descended from such strong men. Or if, with Mr. Hannay, we say, "In proportion as a family contributed to lead in Europe —saw when it had new work to do, and applied itself to doing it—is its history worth writing and reading ; and this truth is the foundation of all honourable and pardonable family pride ;' the meaner forms of this feeling are ignoble, but the feeling itself is natural and true ;"—then no families are so certainly descended from great leaders. Under any theory of pedigree the Royal Houses of Europe ought to contain the picked men and women of the world, the persons best fitted to lead, and direct, and restrain mankind. As a matter of fact, they are in the mass very inferior persons, for the most part vulgar of aspect, slow of apprehension, incapable of initiative, indifferent generals, unwise statesmen, incapable in times of trial even of doing their ordinary work—keeping their own thrones. There have been great exceptions among them no doubt, for some of them have been forced to work hard, and they have had for a thousand years almost a monopoly of certain forms of action ; but as a mass they are persons whom nations would not elect, who, even if born nobles, would never rise to be premiers. Within this century, incomparably the ablest among kings have been the son and grandson of a petty Italian lawyer, while the oldest and proudest of all have palpably and confessedly failed. If "blood" in its perfection only yields Hapsburgs and Bourbons, is not the theory which gives "blood " value necessarily falsified? Is it not, in fact, at least possible that continuous high culture injures families as it injures potatoes, that cmteris paribus the new man will be stronger and fitter for leadership than the old, that high birth should be considered an a priori disqualification for high office among man- kind? Experience must be the test of all theories like birth, and if we believe in " blood " in horses because a horse without a pedigree seldom wins a Derby, because an Arab has qualities not to be found in a less carefully bred race of coursers, we ought to disbelieve it when its result is a caste like that which now vege- tates in Germany under the name of the " mediatized Princes." Suppose them all swept away by an epidemic, who would be the worse ?—and yet the mediatized families ought under the theory of " blood " to be the leading statesmen, warriors, scholars, divines, and engineers of the existing world.

One must believe in birth a good deal to enjoy a book like Mr. Hannay's Three Hundred Years of a Norman House ; but most Englishmen do believe in it, and will therefore enjoy it very much, though after all its substance amounts very much to this. That a family named Gournay did from the time of Rollo hold consider- able possessions on the frontier of Normandy, did follow William and the collected adventurers of Southern Europe to England, and did not found a permanent ruling house, disappearing out of the Baronage poor and obscure in 1239, and having now for repre- sentatives only the Quaker family just now in a condition of sus- pended animation. But the incidents of the three hundred years are pleasantly told by a writer who shows in every line how keen is his sympathy for the Norman freebooters, to whom indeed he ascribes in his partiality a steady " policy" of civilization through conquest, and his hatred of the Saxon. The following paragraph about the last Saxon house which reigned in England will be new to many of our readers :—" Prince Edward's journey, then, was a failure. That of his brother Alfred was a failure and something worse. He landed at Dover ; was arrested, and carried before Harefoot by the exertions of Earl Godwin, who clipped his hands in the blood of his ancient sovereigns by sending the innocent Etheling' to the Isle of Ely to die—blinded, and in chains. There is no washing that stain out of the upstart House—raised by crime —of Edric Streona ; and it is of a piece with the doings of other members of it—Brithtric, Wulfnoth, Sweyn and Tosti, all charge- able with their crime a-piece. That such a family could rise in England is a sad outward sign of the degeneracy within." How many people does Mr. Hannay fancy that the pirate Rollo put to death to extort their treasure ; or is murder only murder when an "Etheling" suffers? The Godwins were not good people, we dare say, but if Rollo and William are entitled to be judged only as men of their age, so are they ; though instead of stealing their neighbours' lands they only sought, in their indiffer- ence to the natural claims of chivalry, to prevent the theft. Still, sympathy is a quality in a historian, and Mr. Hannay has made Out of very poor materials,—for the Gournays did nothing more

remarkable than most other nobles,—a pleasant and readable narra- tive. When he next writes we only wish him a better subject,— say, the family history, hitherto so curiously neglected, — of the Counts of Toulouse, who so nearly founded a new civilization, and who were more dangerous to the Papacy, and more dreaded by it, than even the Hohenstauffen.