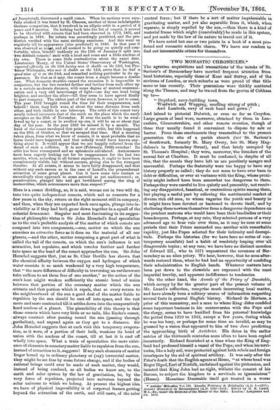 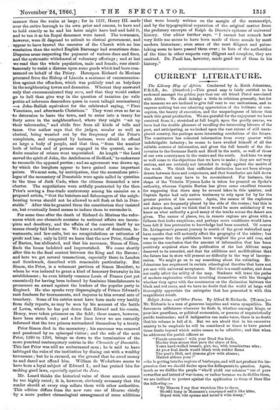 The - agrarian aoquisitiona and tramisietibfebr the 'nianks -of St. Saviour's of 'Bermondsey-have merited ` frepient attention from local historians, 'especially thdee Of Kent •and• Surrey, and of the environs of London, or 'Mich' suburbs as were proud 'Of that title inore-Or less recently. Their --possesSions were thickly scattered along the Thames, and mhy be traced from the groves of Cobham

-And Lambeth, envy of each- band and-gown ;"

'Arid inland to pictorial Dulwich, or even as far . as Croydon. Large grants of land were, moreover, obtained by them in Lan- cashire, Gloucestershire, and other remote counties, though of these they 'Wittily found it convenient - &epee • by sale or Barter... From these emoluments they trantinated to the- present generation the site of a parish church (sibt St. Saviotir's of Southwark, formerly' St. Mary Overy, but '.St. Mary Mag- dalene's in BermondserStreet), • and that lately occupied by St. Thomas's Hospital ; they were, moreover;the feunders of the annual fair at Charlton. It must be confeesed, in despite of all this,- that the annals they have left us are peculiarly 'meagre and uneventful. Perhaps the fraternity were too happy to-have any history properly so called ; they do not seem to have ever been in debt or difficulties, or ever at variance with the -King; whose proxi- mity might indeed- have been somewhat too dangerous to them. Perhaps theywere -careful to live quietly and peaceably, -not-receiv- ing any-disappointed, fanatical, or contentious spirits among them, but playing a useful part by relieving the matrimonial market of diverse rich old men, to whose vagaries the youth' and: beauty in it might have 'been devoted or hastened to devote itself, . and by sheltering these novices themselves from a dangeroua dependence on the prudent matrons Who Would have been their landladies or their housekeepers. Perhaps, at any rate, they selected persons of a very advanced age to bear rule- over them,ms it may be seen-at some Periods that their Priors succeeded one 'another with rernaekable rapidity, just like. Popes selected for -their infirmity and decrepi- tude. Perhaps the historian (for we have here no series of con- temporary annalists)' had ' a tabit• of 'resolutely leaping over disagreeable topics ; at any rate; -we have here no distinct mention of Edward III., who in 1371 sequestered the reveaues -of Mr- mcmdsey as an alien- priory. We•hear,-•however, that he soonafter- wards restored them; when-he had had an opportunityof confiding their administration to English hands. Whatever matters have been plat down in the chronicle are expressed with the most impartial brevity, and apparent indifference to tendencies.

On the other hand, the Annals of the Priory' of Dunstable, 'which occupy by far the 'greater part of the present volume of Luard's collection, comprise much interesting local matter, and- have-already been a• solitary /source, of intermation respecting 'several facts in general Engtishihistery. Richard' de Morines, a prior of ' this monastery, and a man to .whom Xing -John-confided some important business in his -controversies with the Pope and the clergy, seems to have .handled' from his personal' knowledge the period from 1210 to 1212, except a-few years, during which he was too busy, or perhaps for -some time -an invalid,' as may be geessed by a vision that appeared to -him 'of two Jews predicting the approaching birth of Antichrist. His dates in -'the earlier entries of the thirteenth centuries seem- Often to 'have been copied incorrectly. Richard flourished at a time when the King of Eng- land had professed himself a vassal of the Pope, and when his terri- tories, like a hay sal; were protected against both rebels and foreign interlopers by the aid of spiritual artillery. It was only after the Prior's death that the English-agents at Rome, ". at Whose head was 'Roger Bigod; Earl Of-Norfolk, exelainied against'the pretension, and insisted that-Bang John had no right, without the consent of his Barons, to subject the kingdom to a servitude so ignominious" (Hume). Meantime Dunstable itself got treated in a worse • itniides-liiiitailicti, Vol. III. "Aiinales Priifivlut 'de 1311,Vitalliii 1A.. D. 1-1197); Armaies • Nonage'Sc -Bermandeseia 10421432). Editect-try• Lund,

manner than' the realm at large ; for in 1227, Henry M. made over the entire borough to its own prior and canons, to have and to hold exactly as he and his heirs might have had and held it, and to tax it as his Royal demesnes were taxed. The townsmen, however, were ill disposed to submit to clerical government, and . 'appear to have braved the censures of the Church with no less • resolution than the united English Baronage had sometimes done. Disputes arose'respecting the payment of various dues and fines, and the systematic withdrawal of voluntary offerings ; and at last we'read that the whole population, male and female, rose simul- laneously to resist a distress upon some goods which had been com- menced on behalf of the Priory. Hereupon Richard de Morines 'procured from the Bishop of Lincoln a sentence of excommunica- tion against the offenders, which was publicly read on holydays in the neighbouring towns and deaneries. Whereat they answered only that excommunicated they were, and that they would rather go to hell than give way in the question of taxation (se velle potiiis ad infernum descendere quam in cause tallagii succumbere) —a John-Bullish equivalent for the celebrated saying, " First 'Venetians, and afterwards Christians." They went even so far as "to determine to leave the town, and to enter into 'a 'treaty for 'forty- acres in the neighbourhood, where 'they might " set up their tabernacles," and abide free from all kinds of tolls and taxes. Our author says that the judges, secular as well as clerical, being wearied out by the frequency of the Prior's complaints, and conquered by laziness, were afraid to • offend ao large a body of people, and that thus, " from the number both of bribes and of persons engaged in the quarrel, an 'in- finite number of crimes went unpunished. At length " the Lord moved the spirit of John, the Archdeacon of Bedford," to endeavour to reconcile the opposed parties ; and an agreement was drawn up, by' which the burghers' appear to have gained some important voints. We'must note, by anticipation, that the anomalous

loges of the monasteryof Dunstable were again called in• questinn in. the time of Jack' Cade, when the citizens demanded a new 'charter. The negotiations were artfully protracted' by the then 'Prior's sowing a free-trade controversy among his enemies on a proposed article, "that the butchers and fishmongers of the neigh- bouring towns should not be allowed to sell flesh or fish in Dun- stable." After this he granted them the constitution they insisted on, but eventually found means toinduce them to surrender it.

• ences which our chronicle contains to national 'affairs are incan- ,plete and desultory, and the affairs Of the convent itself by no • means clearlylitid before us. We have a series of -donations, in- ' vestments, and lbw-suits, but no recapitulations or estimates of 'prat and loss ; biilyin 1262 we le,arn' that the new Prior, Geoffrey ofBarton, has 'abdicated, and that his successor, Simon of Eton, "finds the house indebted and impoverished. We come shortly after this to the final contest between the King and the Barons ; and here we get several transactions, especially those in London and Southwark, described with reasonable particularity. But Simon, the Prior, is a vehement partizan of Simon Montfort, to -whom he was induced to grant a kind of honorary fraternity in his establishment; he even bitterly censures Louis of France (not yet canonized) for having been induced by feminine blandishments to pronounce an award against the leaders bf the popular party in England. He also speaks very disparagingly of Prince Edward's rash fondness for tournaments, and imputes to him several acts of treachery. Some of his entries must have been made very hastily frmn daily reports, as may be seen by his account of the battle of Lewes, where he has put down that Edward and his cousin, Henry, were taken prisoners on the field; these names, however, have been struck out ; and a few lines lower we are correctly informed that the two princes surrendered themselves by a treaty.

Prior Simon died in the monastery ; his successor was removed and pensioned by an episcopal visitor ; and the rule of the next Prior, 128C) to 1296, brings us down to the termination of the more punctual contemporary entries in the Chronicle of Dunstable. This last Prior was still an embarrassed man ; he is said to have infringed the rules of the institution by dining out with a wealthy townsman ; but he is excused, on the ground that he owed money to and dared. not offend him. William de Wederhore seems to have been a loyal Subject of Edward I., and has praised him for snaking good laws, especially against the Jews.

Mr. Luard thinks the historical value of these annals cannot be too highly rated ; it is, however, obviously necessary that the reader should at every step collate them with other authorities. This edition differs from the now rare one of Hearne chiefly by a more perfect chronological arrangement of some additions

that were loosely written on the margin of the manuscript, and by the typographical separation of the original matter from the prefatory excerpts of Ralph de Diceto's epitome of universal history. Our editor further says, " I cannot but remark how very little use seems to have been made of these annals by most modern historians ; • even some of the most diligent and pains- taking seem to, have passed 'them over ; 'in lists of the authorities of the time in other respects very 'diligent and complete, they are omitted. Dr. Pauli has, howeier, made good use of them in his history."