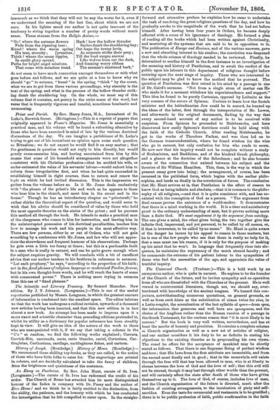 An Essay on Pantheism. By Rev. John Hunt, curate of

St. Ives. (Longmans.)—The curate of St. Ives has redeemed the credit of his order. The Church of Rome has awarded him its most distinguished honour of the Index in company with Dr. Pusey and the anther of Eccs Homo I and we think he is fairly entitled to the distinction, from the ability, the patience, and the honesty with which he has conducted the investigation that he felt compelled to enter upon. In the straight-

forward and attractive preface he explains how he came to undertake the task of resolving the great religions questions of the day, and how he gradually awoke to the magnitude of the work that he had set before himself. After having been four years in Orders, he became deeply affected with a sense of his ignorance of theology. He formed a plan of reading all the books which had been written against Christianity, and mastering all the systems that are said to be in opposition to it- The publication of Essays and Reviews, and of the various answers, gave a new and absorbing interest to his studies; the conviction was deepened that the whole science of theology needed to be reviewed. Finally, he determined to confine himself in the first instance to an investigation of the meaning and history of Pantheism, and to await the verdict of the public upon his labours in this department of religious thought before entering upon the next stage of inquiry. Those who are interested in the subject may be glad to know the method that he pursued. The question of Pantheism was first raised in his mind by a passage in one of Dr. Caird's sermons. "Not from a single atom of matter can He who made it for a moment withdraw his superintendence and support." This idea he found to be purely Cartesian, opposed by Leibnitz as the very essence of the errors of Spinoza. Curious to learn how the Scotch minister and the latitudinarian Jew could be in accord, he hunted up the ideas of the latter, first through the interpretation of Mr. Lewes, and afterwards in the original documents, finding by the way that every second-hand account of any author is to be received with suspicion. From Spinoza he proceeded to Malebranche, and here discovered how easily Spinoza's doctrines could be held along with the faith of the Catholic Church. After reading Malebranche, he got to the works of Theodore Parker, and was then led on to the German transcendentalists, where he found wisdom for the wise who go in earnest, but only confusion for him who reads to scorn. He now saw that his inquiry would not be complete without a study of Brahminism, and Buddhism, and of the kindred Greek philosophy, and a glance at the doctrine of the Schoolmen ; and he also became aware of the connection that existed between his subject and the theories of Sir William Hamilton. This, then, is the way in which the present essay grew into being'; the arrangement, of course, has been reversed in the published form, which begins with the earlier philo- sophies, and lands us finally in the correlation of forces. The conclusion that Mr. Hunt arrives at is, that Pantheism is the effort of reason to know God as being infinite and absolute, —that it is common to the philo- sophy of all religions,—and that it is quite consistent with, and has co- existed with the conception of God as a person. " The argument from final causes proves the existence of a world-maker. It demonstrates that there is a mind working in the world. It is a clear and satisfactory proof to the ordinary understanding of man, but it proves nothing more than a finite God. We must supplement it by the argument from ontology. The one gives a mind, the other gives being, the two together give the infinite God, impersonal, and yet personal, to be called by all names, or, if that is irreverent, to be called by no name." Mr. Hunt is quite aware of the danger he incurs by his appeal to reason in these matters, but he is one of the few people who see that there is really no help for it, that a man must use his reason, if it is only for the purpose of making up his mind that he won't. In language that frequently rises into elo- quence, he maintains the supremacy of the much abused faculty ; and he commends the outcome of his patient labour to the sympathies of those who feel the necessities of the age, and appreciate the value of truthful inquiry.