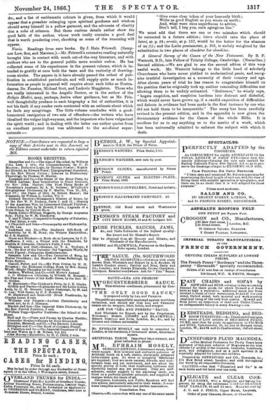 son Low, Son, and Marston.)—Mr. Friswell's extensive reading naturally brought him in contact with much out-of-the-way literature, and with authors who are to the general public mere nominis umbras. He has collected some of his experiences in the present volume, which is in- tended to gratify at once both the taste and the curiosity of drawing- room circles. The papers in it have already passed the ordeal of pub- lication in established periodicals, and will supply quite as much in- formation as people in general will require about such folks as Nostra- damns, Dr. Faustus, Michael Scot, and Ludovic Muggleton. Those who are really interested in the Angelic Doctor, or in the author of the Religio Medici, may, perhaps, desire other guidance, but as Mr. Fria- -well thoughtfully prefixes to each biography a list of authorities, it is not his fault if any reader rests contented with an estimate about which he feels any misgivings. The little volume concludes with a good- humoured castigation of two sets of offenders—the writers who have idealized the vulgar highwayman, and the impostors who have vulgarized the Spirit world ; and in dealing with the latter our author quotes from an excellent protest that was addressed to the soi-disant super- naturals :—

" Give some clear token of your heavenly birth ; Write as good English as you wrote on earth; And, what were once superfluous to advise,

Don't tell, I beg you, such egregious lies."

We must add that there are one or two mistakes which should be corrected in a future edition ; latere should take the place of lateri, at p. 24; errotic, at p. 157, would be the bettor for the absence of an (r); and the Latin pentameter, p. 201, is unduly weighted by the substitution in two places of daudetur for clauditur.