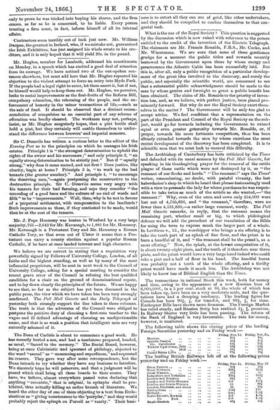 Page 3, 24 November 1866 — The - Archbishop of Canterbury has been criticized by the Times and
Close

The - Archbishop of Canterbury has been criticized by the Times and

defended with its usual acumen by the Pall Mall Gazette, for speaking in his thanksgiving prayer for the removal of the cattle plague,of those cattle which were not destroyed--by it, as "the remnant of our flocks and herds." "The remnant I" says the Times' writer, remembering, no doubt, with painful vivacity, the last haberdasher's shop in which he heard that phrase insinuatingly used with a view to persuade the lady for whose purchases he was respon- sible to take twice as much of the article as she wanted,—" the remnant !" Why, even of the oxen and cows only 254,000 were lost out - of 4,785,836, and " the remnant," therefore, were no fewer than 4,531;836,—a rather lute remnant, surely. The Pall Mall Gazette remarks, in reply, that the remnant means the remaining part, whether small or big, to which philological defence we will add the precedent of our translation of the Bible for using the term to express much the larger part of a whole. In Leviticus v., 13., the worshipper who brings a sin offering is to take the tenth part of an ephah of fine flour, and the priest is to burn a handful of it, and " the remnant shall be the priest's, as a meat offering." Now, the ephah, at the lowest computation of it, is about twenty-eight pints, and the tenth of it therefore near three pints, and the priest would have a very large hand indeed who could take a pint and a half of flour in his hand. The handful burnt was probably not a tenth of the whole offering, and a thrifty priest would have Made it much less. The Archbishop was not likely to know less of Biblical English than the Times.