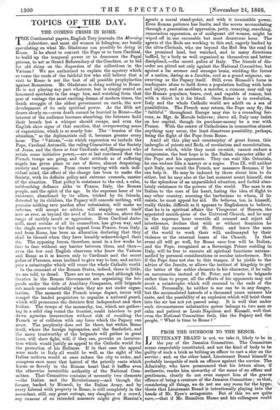 THE COMING CRISIS IN ROME.

Amid all this play and counterplay of great forces, this imbroglio of priests and Reds, of secularism and sacerdotalism, of forces which, while they must co-exist, cannot endure a compromise, the best hope is in the Italian character alike of the Pope and his opponents. They can wait like Orientals, he can endure like a martyr or a negro: Pius IX. will neither quit Italy, nor recall the French, nor massacre Romans, if he can help it. He may be induced by those about him to do either, but he may also at the last moment assert himself, rise to the splendour of an unparalleled situation, and forbid abso- lutely resistance to the powers of the world. The man is an Italian to the core of his heart, hating the idea of flight to any other country, scorning the barbarians to whom, if he resists, he must appeal for aid. He believes, too, in himself, really thinks, difficult as it appears to Englishmen to believe, that he is in spiritual affairs the Vicegerent of Heaven, the appointed mouth-piece of the Universal Church, and he may in the supreme hour override all counsel and reject all interference, declare that with or without dominion he is still the successor of St. Peter, and leave " the men of the world to work their will, undismayed by their violence or the external losses of the Church. In that event all will go well, for Rome once free will be Italian, and the Pope, recognized as a Sovereign Prince residing in Italy, will be free to execute all spiritual functions. untram- melled by personal considerations or secular interference. But if the Pope does not rise to this temper, if he yields to the advice of the Jesuits, or allows the instinct of kingship to get the better of the nobler elements in his character, if he calls on mercenaries instead of St. Peter, and trusts to brigands rather than to prayer, all the efforts of his opponents may not avert a catastrophe which will resound to the ends- of the world. Personally, he neither is nor can be in any danger, but the accumulated hatreds of a thousand years menace his caste, and the possibility of an explosion which will hoist them into the air has not yet passed away. It is well that under such circumstances substantive power belongs to two men so calm and patient as Louis Napoleon and Ricasoli, well that even the National Committee feels, like the Papacy and the people, " What is time to Rome ? "