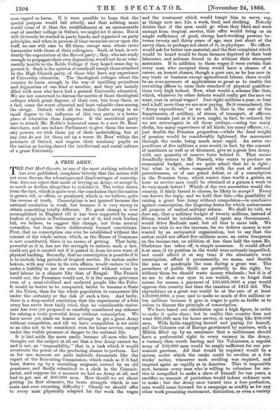 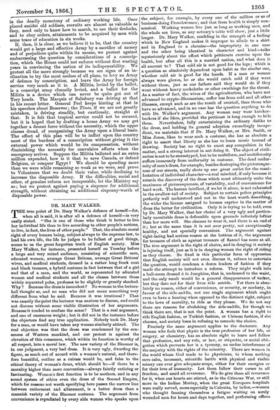 THE Pall Mall Gazette, in one of the most striking articles it has ever published, complains bitterly that the nation will not even discuss the advantages and disadvantages of conscrip- tion, does not reject that mode of levying an Army, or accept it, so much as decline altogether to consider it. The writer draws from the fact, which is quite true, the conclusion that the nation is grown old, or effete, or paralyzed, which is, we believe, quite the reverse of truth. Conscription is not ignored because the national resolution is weak, but because it is very strong to obtain something totally different. No great change is ever accomplished in England till it has been supported by some leaders of opinion in Parliament or out of it, and such leaders fail, we believe, to suggest this change, not from mental cowardice, but from three deliberately formed convictions. First, that no conscription can ever be established without the consent of the whole nation, which, as the House of Commons is now constituted, there is no means of getting. That body, powerful as it is, has not the strength to enforce such a law, could not get it carried out if it passed it, from its own want of physical backing. Secondly, that no conscription is possible if it is to include long periods of tropical service. No nation under heaven, with any voice in its own affairs, would endure to live under a liability to see its sons sentenced without crime to hard labour in a climate like that of Bengal. The French would not, the Prussians would not, it is the master grievance even of a semi-civilized and enslaved people like the Poles. It would be better to be conquered, better to become a State of the Union, than for the whole population to commence life under the certainty or the risk of such a fate. And lastly, there is a deep-rooted conviction that the experiment of a free army has never been fairly tried, that no considerable states- man has ever yet proposed or carefully considered any scheme for raising a truly powerful Army without conscription. We have never yet made an honest attempt to get a great Army without compulsion, and till we have compulsion is set aside as an idea not to be considered even for home service, except under the visible pressure of danger to the national life.

It is laid aside the more easily, because all men who have thought out the subject at all see that a free Army cannot be, and is not, an " impossibility," that is, a task which it would overstrain the power of the producing classes to perform. Let us for one moment set aside imbecile documents like the report of the Recruiting Commission, which reads as if it had been drawn up by a recruiting sergeant, revised by an old pensioner, and finally submitted to a clerk in the Commis- sariat, and suppose for a moment we had no Army at all, and had to get one of 200,000 men. How should we set about getting its first elements, the brute strength which is our main and ever recurring difficulty ? Clearly we should offer to every man physically adapted for the work the wages

and the treatment which would tempt him to serve, say, as things now are, 15s. a week, food, and clothing. Nobody doubts that if the men could go when they liked and were exempt from tropical service, that offer would bring us an ample sufficiency of good, strong, hard-working persons be- tween twenty and thirty years of age, men just short of the navvy class, or perhaps not short of it, in physique. No officer would ask for better raw material, and the first complaint which would be heard would be from farmers deprived of their best labourers, and artisans forced to do without their strongest assistants. If in addition to these wages it were certain that every man who accepted them would have a chance of a career, an honest chance, though a poor one, as he has now in any trade or business except agricultural labour, there would be an over-pressure of applications so great as to enable the recruiting offices to raise their standard of physical qualifica- tions very high indeed. Now, what would a scheme like that, which, whatever its other defects would really get the men we want, cost in actual wages ? Just eight millions a year, or four and a half more than we are now paying. Be it remembered, the " Army expenditure," as we call it, that is, the cost of the departments, of artillery, of stores, of transport, of officers, would remain just as it is now, might, in fact, be reduced, for we are extravagant in all those outlays,—using too many clerks, too many supervisors of all kinds, too many officers, i.e., just double the Prussian proportion—while the dead weight of pension would be considerably lightened, the movement through the ranks being much more rapid. An extra ex- penditure of five millions a year would, in fact, by the consent of martinets as well as of dreamers, give us a great free Army, with any quantity of reserve force behind it. That seems dreadfully serious to Mr. Disraeli, who wants to produce an economical budget, and we quite admit that he is right ; but what is it, when compared with the cost of national powerlessness, or of one grand defeat, or of a conscription in the Prussian form, which wastes time worth a guinea an hour on service men could be obtained at a guinea a week to do very much better ? 'Which of the two necessities would the country, if fairly forced to choose, be likely to accept Every one knows the reply, and we hold that this—the possibility of raising a great free Army without compulsion—is conclusive against conscription, the lingering desire for which embarrasses all projects of radical military reform. We shall be told, we dare say, that a military budget of twenty millions, instead of fifteen, would be intolerable, would upset any Government, would drive Radicals mad, but all that is mere talk. We have no wish to see the increase, for we believe money is now wasted by an antiquated organization, but to say that the nation could not afford five millions more, an extra fourpence on the income-tax, an addition of less than half the taxes Mr. Gladstone has taken off, is simple nonsense. It would afford it at once, if its position in the world were seriously imperilled, and could afford it at any time if the alternative were conscription, afford it permanently, we mean, and double the sum or quadruple the sum during a great war. The preachers of public thrift are perfectly in the right, for without them we should waste money wholesale ; but it is of no use to shut our eyes to our wealth, or to forget that means for means, a payment of 150,000,0001. a year would oppress this country less than the taxation of 1815 did. The expenditure on a great war would be at the rate of at least 150,000,0001. a year, and to make so much of five millions or ten millions because it goes in wages is quite as feeble as to refuse to discuss the principle of conscription.

We have based our calculation upon a high figure, in order to make it quite clear; but in reality this country does not want 200,000 men for home service, or anything like 200,000 men. With India supplying herself and paying for herself, and the Colonies out of Europe garrisoned by marines, with a Militia filled up by an assurance that a militiaman should have a preferential right to every vacancy in the Army, a vacancy then worth having, and the Volunteers, a regular army of 100,000 men would be amply sufficient for our per- manent garrison. All that would be required would be a system under which the ranks could be swollen at a few weeks' notice, whenever such swelling was required, and emptied again as rapidly as in America. This is impossible now, because every man who is willing to volunteer for ser- vice is compelled to make a slave of himself for ten years, a sacrifice no amount of patriotism would induce ordinary men to make ; but the Army once turned into a free profession, men would come forward for a campaign as readily as for any other work promising excitement, distinction, or even a variety in the deadly monotony of ordinary working life. Once placed amidst old soldiers, recruits are almost as valuable as they, need only to know how to march, to use their firelocks, and to obey orders, attainments to be acquired by men with some trace of education in six weeks.

If, then, it is clear, as we believe it to be, that the country would get a large and effective Army by a sacrifice of money and of prejudices quite within its means, we protest against embarrassing the question by considerations of a conscrip- tion, which the House could not enforce without first wasting years in convincing the nation of its indispensability. We protest all the more strongly because we see signs of an in- clination to try the most useless of all plans, to levy an Army of defence by conscription, and leave the Army for foreign service very much as it is. A Militia, levied by the ballot, is a conscript army clumsily levied, and a ballot for the Militia is a device which can never be quite got out of Tory heads. The Marquis of Salisbury was driving at that in his recent letter. General Peel keeps hinting at that in his speeches about Reserves ; the Times, if we are not greatly mistaken, is driving steadily, but cautiously, straight at that. It is felt that tropical service could not be secured, but it is hoped that by drafting a home Army we may get together a decent force without the necessity, which the upper classes dread, of reorganizing the Army upon a liberal basis. The effect of this plan will be to inflict upon the country most of the burdens of a conscription without giving it the external power which would be its compensation, without diminishing the necessity for convulsive efforts when the emergency arrives. Suppose the Militia balloted and an extra million expended, how is it that to save Canada, or defend Belgium, or conquer Egypt ? We should be spending more than we were while remaining as weak as we were, and prove to Volunteers that we doubt their value, while declining to increase the disposable Army. If the difficulties, social and other, of genuine reform are insuperable, let the Ministry say so ; but we protest against paying a sixpence for additional strength, without obtaining an additional sixpenny-worth of disposable power.