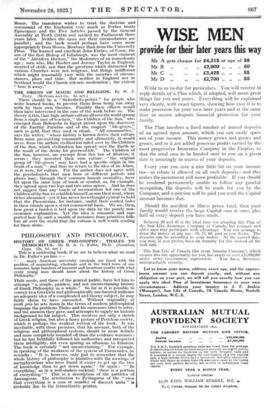 THE ORIGIN OF MAGIC AND RELIGION. By W. J. Perry.

There should be a " Sicherheits-polizei " for people who write learned books, to prevent them from being run away with by their own theories. Possibly these officers would then have intervened in the case of the work before us. The theory is this, that high archaic culture all over the world sprang from a single race of teachers, " the Children of the Sun, ' who emerged from Heliopolis -in Egypt intent upon the- discovery of the Earthly Paradise and of the magical " life-givers," such as gold, that they used in ritual. All communities," says the writer, " whose history is known derive their culture from some pre-existing community and ultimately, it would "seem, from the archaic civilization ruled over by the Children of the Sun, which civilization has spread over the Earth as the result of the desire for givers-of-life." The Children of the Sun, however, are exempt from this law of filiation, it seems ; they invented their own culture—" the original group of ' life-givers ' may have had a specific origin in the brain of a man' "—and thus we return to the idea of an Adam, as it were, for culture. For the .author does not agree with the psychologists that men born at different periods and places may, through their common human mentality, have hit upon the same type of tomb or symbol, as, for example, they agreed upon two legs and two arms apiece. And he does not suggest that any touch of mercantilism led one of the Children of the Sun to establish himself, as was their wont, where riches abounded—yet it has never been thought cynical to hold that the Phoenicians, for instance, undid their corded bales in these islands upon a strict commercial basis. We see, then, how great a burden is laid upon the data by the purely non- economic explanation. Yet the idea is romantic and sup- ported here by such a wealth of instances from primitive folk- lore all over the world that the volume is well worth reading for these alone.