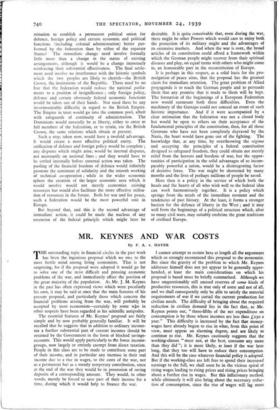 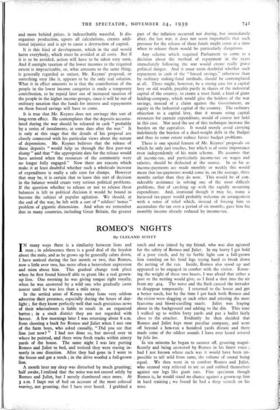 THE outstanding topic in financial circles in the past week has been the ingenious proposal which we owe to the most fertile mind among living economists. That is not surprising, for if the proposal were adopted it would go far to solve one of the most difficult and pressing economic problems of the war, and immediately affect the position of the great majority of the population. As Mr. J. M. Keynes in the past has often expressed views which were peculiarly his own, it may be said at once that the main features of his present proposal, and particularly those which concern the financial problems arising from the war, will probably be accepted by most economists—certainly by some wiao in other respects have been regarded as his scientific antipodes.

The essential features of Mr. Keynes' proposal are fairly simple and by now probably generally familiar It will be recalled that he suggests that in addition to ordinary income- tax a further substantial part of current incomes should be retained by the Government in the form of blocked savings- accounts. This would apply particularly to the lower income- groups, now largely or entirely exempt from direct taxation. People in this class are to be made to contribute some part of their income, and in particular any increase in their real income due to a rise in wages, to the costs of the war, not as a permanent but as a merely temporary contribution, since at the end of the war they would be in possession of saving deposits of a corresponding amount. They would, in other words, merely be forced to save part of their income for a time, during which it would help to finance the war. I cannot attempt to restate here at length all the arguments which so strongly recommend this proposal to the economist. But since the gravity of the problem to which Mr. Keynes addresses himself does not yet appear to be generally appre- hended, at least the main considerations on which his proposal is based must be briefly summarised. Although we have unquestionably still unused reserves of some kinds of productive resources, this is true only of some and not of all, and we shall consequently only be able to satisfy the material requirements of war if we curtail the current production for civilian needs. The difficulty of bringing about the required reduction in civilian demand lies in the fact that, as Mr. Keynes points out, " three-fifths of the net expenditure on consumption is by those whose incomes are less than £250 a year." This difficulty is increased by the fact that money- wages have already begun to rise in what, from this point of view, must appear an alarming degree, and are likely to continue to rise. Mr. Keynes cautiously suggests that the working-classes "must not, at the best, consume any more than they did "; it is more likely, at least if the war lasts long, that they too will have to reduce their consumption. And this will be the case whatever financial policy is adopted. But if the working-class are left free to spend their increased earnings to the full, we shall soon be in the vicious spiral of rising wages leading to rising prices and rising prices bringing about a further rise in wages. But this inflationary method, while ultimately it will also bring about the necessary reduc- tion of consumption, since the rise of wages will lag more and more behind prices, is indescribably wasteful. It dis- organises production, upsets all calculations, creates addi- tional injustice and is apt to cause a destruction of capital.

It is this kind of development, which in the end would harm everybody, which must be avoided at all costs. But if it is to be avoided, action will have to be taken very soon. And if outright taxation of the lower incomes to the required extent is impracticable, or, what amounts to the same thing, is generally regarded as unjust, Mr. Keynes' proposal, or something very like it, appears to be the only real solution. What it in effect amounts to is that the contribution of the people in the lower income categories is made a temporary contribution, to be repaid later out of increased taxation of the people in the higher income groups, since it will be out of ordinary taxation that the funds for interest and repayments on these forced savings will have to come.

It is true that Mr. Keynes does not envisage this sort of long-term effect. He contemplates that the deposits accumu- lated during the war should be released in cash " probably by a series of instalments, at some date after the war." It is only at this stage that the details of his proposal are closely connected with his particular views about the nature of depressions. Mr. Keynes believes that the release of these deposits " would help us through the first post-war slump " and that " the appropriate date for the release would have arrived when the resources of the community were no longer fully engaged." Now there are reasons which make it at least doubtful whether such a wholesale increase of expenditure is really a safe cure for slumps. However that may be, it is certain that to leave this sort of decision in the balance would create very serious political problems. If the question whether to release or not to release these balances is left to political decision it would be bound to become the subject of popular agitation. We should, at the end of the war, be left with a sort of " soldiers' bonus " problem of gigantic dimensions. And when we remember tUt in many countries, including Great Britain, the greater part of the inflation occurred not during, but immediately after, the last war, it does not seem improbable that such pressure for the release of these funds might conic at a time when to release them would be particularly dangerous.

Any scheme which required Parliament to come to a decision about the method of repayment in the years immediately following the war would create really grave political danger. And it must seem doubtful whether such repayment in cash of the " forced savings," otherwise than by ordinary sinking-fund methods, should be contemplated at all. There might, however, be a strong case for a capital levy on old wealth, payable partly in shares of the industrial capital of the country, to create a trust fund, a kind of giant holding-company, which would give the holders of the war savings, instead of a claim against the Government, an equity in the industrial capital of the country. The ordinary objection to a capital levy, that it means using capital resources for current expenditure, would of course not hold in this case. Nor need the use of this technique increase the burden on the capitalists. It would merely avoid carrying indefinitely the burden of a dead-weight debt in the Budget and thus to some extent reduce future budget problems.

There is one special feature of Mr. Keynes' proposals on which he only just touches, but which is of some importance even independently of his main scheme. He assumes that all income-tax, and particularly income-tax on wages and salaries, should be deducted at the source. In so far as income-payments are made monthly or weekly this would mean that tax-payments would come in, on the average, three months earlier than they do now. This would be of con- siderable assistance in solving one of the most difficult problems, that of catching up with the rapidly mounting expenditure. And, irrational though it may be, many a harassed tax-payer would probably welcome an arrangement with a sense of relief which, instead of forcing him to accumulate the tax over a period of six months, gave him his monthly income already reduced by income-tax.