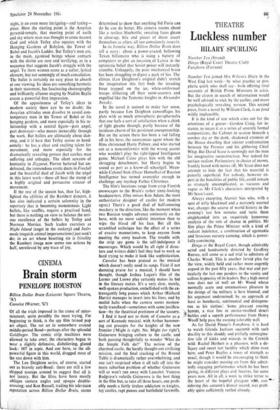 Camelot (Warner, 'U') Of all the trials imposed in the cause of enter- tainment, quite possibly the most trying, I'm beginning to think, is the spy film turned pop art object. The rot set in somewhere around middle-period Bond—perhaps after the splendid Goldfinger. The comic strip machines were allowed to take over; the characters began to wear a slightly defensive, disbelieving, glazed look: 007 in aspic. And our hero, as the all- powerful figure in this world, dragged most of the rest down with him.

The Len Deighton series, of course, started out as bravely anti-Bond: there are still a few

chipped teacups around to. suggest that all is not luxury. But the films have been mostly oblique camera angles and opaque double- crossing; and Ken Russell, trailing his television reputation across Billion Dollar Brain, seems determined to show that anything Sid Furie can do he can do better. His camera zooms about like a restless bluebottle; sweating faces gleam in close-up; bits and pieces of ddcor assert themselves as objets all too consciously trouves.

In its frenetic way, Billion Dollar Brain does tell a story : about a power-crazed, bellowing Texan billionaire who is using a battery of computers to plot an invasion\ of Latvia in the optimistic belief that Soviet power will instantly crumble. Unhappily, the poor mechanical brain has been struggling to digest a pack of lies. The climax (Len Deighton's original didn't stretch the imagination this far) finds the invading force trapped on the ice, white-uniformed troops slithering off their snow-scooters and engulfed like the Teutonic knights in Alexander Nevsky.

In the novel it seemed to make fair sense, partly because Len Deighton camouflages his plots with so much atmospheric paraphernalia that one feels a sort of satisfaction when a chink of light gleams through, partly because of tlie insidious charm of his persistent oneupmanship. But on the screen there has been a sad falling off in his hero, the anonymous agent whom the films christened Harry Palmer, and who started out as a nonconformist with the wrong accent who wouldn't play the tight-lipped Intelligence game. Michael Caine plays him with the old shrugging detachment, but Harry begins to sound as pert as a know-all schoolgirl. Mean- while Colonel Stok (Oscar Homolka) of Russian Intelligence has turned avuncular enough to challenge any toyshop Father Christmas.

The film's locations range from crisp Finnish snowscapes to the Brain's rather tinny-looking headquarters. (One misses Ken Adam, the most authoritative designer of castles for modern ogres.) There's a good deal of half-amusing mockery in the direction, like the moment when two Russian toughs advance ominously on the hero, with no more sadistic intention than to wipe the blood off his face. But all this scrambled technique has the effect of a series of evasive mannerisms, to keep anyone from meeting the story bead-on. The trouble with the strip spy game is the self-indulgence it encourages. Which would be all right if direc- tors and writers didn't feel they had to work so hard trying to make it look like sophistication.

Camelot has been praised as the musical which doesn't really need its songs. Faint if not damning praise for a musical, I should have thought, though Joshua Logan's film of the Lerner and Loewe play certainly makes its bid -in the literacy stakes. It's a very slow, stately, well-spoken production, embellished with the ex- travagantly long pauses which Arthur (Richard Harris) manages to insert into his lines, and by restful halts when the camera seems momen- tarily transfixed—sometimes with some justifica- tion—by the theatrical prettiness of the Scenery.

I find it hard not to think of Camelot as.a sort of Kennedy musical, with Arthur hammer- ing out precepts for the knights of the new frontier (Wight is right. No. Might for right'), Guinevere bringing culture to the castle, and both pausing thoughtfully to wonder 'What do the Simple Folk do?' The notion of the charmed castle, the hardly thought-out civilising mission, and the final cracking of the Round Table is dramatically rather overwhelming, and one isn't surprised when it all tails off into the more suburban problem of whether Guinevere will or won't run away with Lancelot. Vanessa Redgrave's volatile Guinevere is the best thing in the film but, to take all three hours, one prob- ably needs a fairly tireless addiction to knights, toy castles, rapt pauses and battlefield farewells.