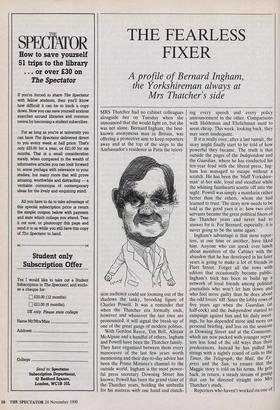 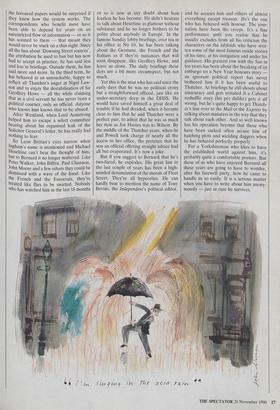 A profile of Bernard Ingham, the Yorkshireman always at Mrs Thatcher's side

MRS Thatcher had no cabinet colleagues alongside her on Tuesday when she announced that she would fight on, but she was not alone. Bernard Ingham, the best- known anonymous man in Britain, was offering a protective arm to keep reporters away and at the top of the steps to the Ambassador's residence in Paris the televi- sion audience could see looming out of the shadows the lanky, brooding figure of Charles Powell. It was a reminder that when the Thatcher era formally ends, however and whenever the last rites are pronounced, it will signal the break-up of one of the great gangs of modern politics.

With Gordon Reece, Tim Bell, Alistair McAlpine and a handful of others, Ingham and Powell have been the Thatcher family. They have organised between them every manoeuvre of the last few years worth mentioning and their day-to-day advice has been the Prime Minister's channel to the outside world. Ingham is the most power- ful press secretary Downing Street has known; Powell has been the grand vizier of the Thatcher years, holding the umbrella for his mistress with one hand and clutch- ing every speech and every policy announcement in the other. Comparisons with Haldeman and Ehrlichman used to seem cheap. This week, looking back, they may seem inadequate.

If it is really over, after a last tumult, the story might finally start to be told of how powerful they became. The truth is that outside the pages of the Independent and the Guardian, where he has conducted his ten-year feud with the liberal press, Ing- ham has managed to escape without a scratch. He has been the 'bluff Yorkshire- man' at her side, loyal and steadfast while the whining fainthearts scuttle off into the night. Powell was simply a mandarin rather better than the others, whom she had learned to trust. The story now needs to be told as the good yarn it is: how two civil servants became the great political fixers of the Thatcher years and never had to answer for it. For Bernard, especially, it is never going to be the same again.

Ingham's advantage is that most repor- ters, at one time or another, have liked him. Anyone who can speak over lunch about members of the Cabinet with the abandon that he has developed in his later years is going to make a lot of friends in Fleet Street. Forget all the rows with editors that occasionally became public. Ingham's trick has been to build up a network of loyal friends among political journalists who won't let him down and who feel more guilty than he does about the odd lovers' tiff. Since the lobby rows of five years ago when the Guardian (at half-cock) and the Independent started to campaign against him and his daily meet- ings, he has depended more and more on personal briefing, and less on the sessions in Downing Street and at the Commons, which are now packed with younger repor- ters less fond of the old ways than their predecessors. Instead he has pulled his strings with a nightly round of calls to the Times, the Telegraph, the Mail, the Ex- press and the Sun, to ensure that the Maggie story is told on his terms. He gets back, in return, a steady stream of gossip that can be directed straight into Mrs Thatcher's study.

Reporters who haven't worked on one of the favoured papers would be surprised if they knew how the system works. The correspondents who benefit most have been able to depend for years on an unrestricted flow of information — or so it has seemed to them — that meant they would never be stuck on a thin night. Since all the fuss about 'Downing Street sources', the attribution he used to ban but has now had to accept in practice, he has said less and less in briefings. Outside them, he has said more and more. In the third term, he has behaved as an untouchable, happy to reflect all Thatcher's anger at Nigel Law- son and to enjoy the destabilisation of Sir Geoffrey Howe — all the while claiming that as a civil servant he has never been a Political courtier, only an official. Anyone who knows him knows that to be absurd.

After Westland, when Lord Armstrong helped him to escape a select committee hearing about his organised leak of the Solicitor General's letter, he has really had nothing to fear. Sir Leon Brittan's eyes narrow when Ingham's name is mentioned and Michael Heseltine can't bear the thought of him, but to Bernard it no longer mattered. Like Peter Walker, John Biffen, Paul Channon, John Moore and a few others they could be dismissed with a wave of the hand. Like the French and the Eurocrats, they're treated like flies to be swatted. Nobody Who has watched him in the last 18 months or so is now in any doubt about how fearless he has become. He didn't hesitate to talk about Heseltine as glamour without substance and he no longer bothers to be polite about anybody in Europe. In the famous Sunday lobby briefings, over tea in his office at No 10, he has been talking about the Germans, the French and the Italians as if they're nuisances that will soon disappear, like Geoffrey Howe, and leave us alone. The daily briefings these days are a bit more circumspect, but not much.

Yet this is the man who has said since the early days that he was no political crony but a straightforward official, just like an under-secretary deep in the DHSS. He would have saved himself a great deal of trouble if he had decided, when it became clear to him that he and Thatcher were a perfect pair, to admit that he was as much her man as Joe Haines was to Wilson. By the middle of the Thatcher years, when he and Powell took charge of nearly all the access to her office, the pretence that he was an official offering straight advice had all but evaporated. It's now a joke.

But if you suggest to Bernard that he's two-faced, he explodes. His great line in the last couple of years has been a high- minded denunciation of the morals of Fleet Street. They're all hypocrites. He can hardly bear to mention the name of Tony Bevins, the Independent's political editor, and he accuses him and others of almost everything except treason. He's the one who has behaved with honour. The jour- nalists have been the creeps. It's a fine performance until you realise that he usually excludes from all his criticism the characters on the tabloids who have writ- ten some of the most famous inside stories of his time, at his instigation and under his guidance. His greatest row with the Sun in ten years has been about the breaking of an embargo on a New Year honours story — an ignorant political report has never bothered him if it has been useful to Thatcher. At briefings he still shouts about inaccuracy and gets irritated if a Cabinet reshuffle story (his pet dislike) gets it all wrong, but he's quite happy to get Thatch- er's line over to the Mail or the Express by talking about ministers in the way that they talk about each other. And so well known has his operation become that those who have been sacked often accuse him of hatching plots and wielding daggers when he has behaved perfectly properly.

For a Yorkshireman who likes to have the established world against him, it's probably quite a comfortable posture. But those of us who have enjoyed Bernard all these years are going to have to wonder, after his farewell party, how he came to handle us so easily. It is a serious matter when you have to write about him anony- mously — just in case he survives.