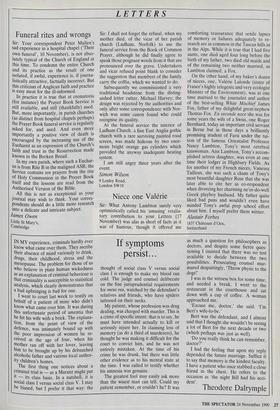 Sir: What Antony Lambton surely very optimistically called his 'amusing' retalia- tory contribution to your Letters (17 November) was alas as short of facts as it was of humour, though it offered me comforting reassurance that senile lapses of memory or failures adequately to re- search are as common in the Tuscan hills as in the Alps. While it is true that I had five aunts, one died aged four long before the birth of my father, two died old maids and of the remaining two neither married, as Lambton claimed, a Fox.

On the other hand, of my baker's dozen of nieces, one, Valerie Lalonde (sister of France's highly telegenic and very ecologist Minister of the Environment), was at one time married to the journalist and author of the best-selling White Mischief James Fox, father of my delightful great-nephew Thomas Fox. En seconde noce she was for some years the wife of a Swiss, one Roger Bernhard, today an important civil servant in Berne but in those days a brilliantly promising student of Farsi under the tui- tion of the famous Orientalist Professor Nancy Lambton, Tony's most cerebral kinswoman. Ann Lambton, Tony's accom- plished actress daughter, was even at one time their lodger in Highbury Fields. As for another of my French nieces, Vanessa Tailleux, she was such a chum of Tony's most beautiful daughter Rose that she was later able to cite her as co-respondent when divorcing her charming ne'er-do-well Greek playboy husband. My father quite liked bad puns and wouldn't even have minded Tony's awful prep school effort about him. I myself prefer them wittier. Alastair Forbes