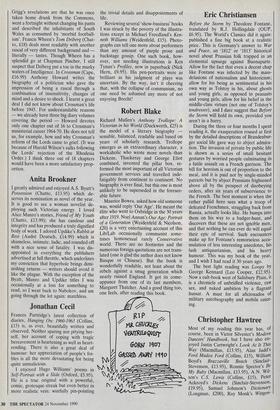 Richard Mullen's Anthony Trollope: A Victorian in his World (Duckworth, £25) is the model of a literary biography — sensible, balanced, readable and based on years of scholarly research. Trollope emerges as an extraordinary character, a workaholic who wrote more novels .than Dickens, Thackeray and George Eliot combined, invented the pillar box, re- formed the most important of all Victorian government services and travelled inde- fatigably from continent to continent. No biography is ever final, but this one is most unlikely to be superseded in the foresee- able future.

Maurice Bowra, asked how old someone was, would reply 'Our Age'. He meant the elite who went to Oxbridge in the 30 years after 1919. Noel Annan's Our Age: Portrait of a Generation (Weidenfeld & Nicolson, £20) is a very entertaining account of this Lib/Lab occasionally communist some- times homosexual rarely Conservative world. There are no footnotes and the numerous foreign quotations are not trans- lated (one is glad the author does not know Basque or Chinese). But the book is wonderfully readable, not least about the rebels against a smug generation which nearly ruined England. It got its come- uppance from one of its last members, Margaret Thatcher. And a good thing too, one feels, after reading this book.