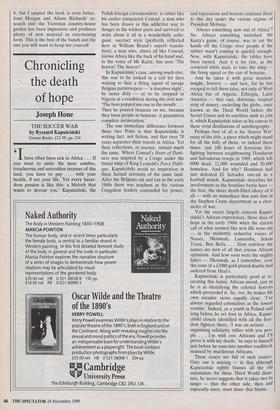 Chronicling the death of hope

THE SOCCER WAR by Ryszard KapuScinski

Ihave often been sick in Africa. . . If you want to enter the most sombre, treacherous and untrodden recesses of this land, you have to pay . . . with your health, if not your life. Yet every hazar- dous passion is like this: a Moloch that wants to devour you.' Kapugcinski, the

Polish foreign correspondent, is rather like his earlier compatriot Conrad: a man who has been drawn in this addictive way to danger in the wildest parts and survived to write about it all in a wonderfully collo- quial, succinct style (perfectly reflected here in William Brand's superb transla- tion); a man who, above all like Conrad, knows Africa like the back of his hand and, in the voice of Mr Kurtz, has seen 'The horror! The horror!'

In Kapukiiiski's case, among much else, this was to be locked in a cell for days waiting to face a firing squad of savage Belgian paratroopers — 'a sleepless night', he notes drily — or to be stopped in Nigeria at a roadblock during the civil war: 'The boss popped me one in the mouth. . Then he poured benzene on me, because they burn people in benzene: it guarantees complete incineration.'

The one immediate difference between these two Poles is that Kapugciliski is writing fact, not fiction, and that over 70 years separates their travels in Africa. Yet their reflections, in essence, remain much the same. Where Conrad's Heart of Dark- ness was inspired by a Congo under the brutal whip of King Leopold's Force Publi- que, Kapugciriski needs no inspiration in these factual accounts of the same land. After the Belgians cut and ran in the early 1960s there was mayhem as the various Congolese leaders contended for power, and repressions and horrors continue there to this day under the vicious regime of President Mobutu.

'Always something new out of Africa'? No. Always something wretched. Mr Kurtz's game, of course, was to cut the hands off the Congo river people if the rubber wasn't coming in quickly enough. Now, with Kapugcinski, the tables have been turned. And it is his fate, as the cornered white man, to take the whip — the firing squad or the can of benzene.

And he takes it with great stoicism, insight, bravery — and luck, for he has escaped to tell these tales, not only of West Africa but of Algeria, Ethiopia, Latin America — that vast, dolorous, tropical strip of misery, encircling the globe, once known as the Third World before the Soviet Union and its satellites sunk to join it, which Kapukinski takes as his canvas in these vivid distillations of autobiography.

Perhaps best of all is his 'Soccer War' essay of the title, a piece which might stand for all the folly of those, or indeed these times: just 100 hours of ferocious fire- fighting between neighbouring Honduran and Salvadoran troops in 1969, which left 6000 dead, 12,000 wounded and 50,000 homeless. And for why? Honduras had just defeated El Salvador one-nil in a football match. Kapugciriski describes his involvement in the frontline battle here — the fear, the sheer death-filled idiocy of it all — with an immediacy that puts him in the Stephen Crane department as a chro- nicler of war.

Yet the essays largely concern Kapug- chiski's African experiences, those days of hope in the early 1960s when the clarion call of what seemed like new life went out — in the stridently seductive voices of Nasser, Nkrumah, Lumumba, Sekou Toure, Ben Bella . . . How redolent the names are now of all that joyous African optimism. And how soon were the mighty fallen — Nkrumah, as I remember, over the issue of a £3000 gold-plated double bed ordered from Heal's.

Kapukinski is particularly good at re- creating this balmy African mood, just as he is at identifying the colonial horrors which preceeded it. So, too, he makes his own socialist views equally clear: 'I've always regarded colonialists as the lowest vermin.' Indeed, as a youth in Poland and long before he set foot in Africa, Kapug- cifiski closely identified with all the free- dom fighters there. 'I was an activist . . • organising solidarity rallies with you peo- ple . . . I'm with you Africans and I'll prove it with my deeds,' he says to himself just before he runs into another roadblock manned by murderous Africans.

These essays are full of such ironies. Only one is missing — in that although Kapugchiski rightly blames all the old colonialists for these Third World disas- ters, he never suggests that it takes two to tango — that the other side, then and especially since, must share that blame.