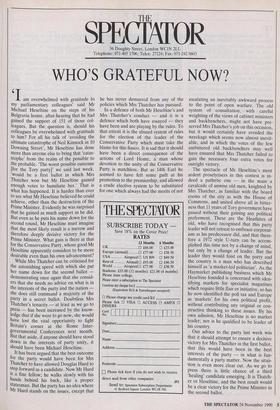 am overwhelmed with gratitude to my parliamentary colleagues' said Mr Michael Heseltine on the steps of his Belgravia house, after hearing that he had gained the support of 151 of those col- leagues. But the question is, should his colleagues be overwhelmed with gratitude to him? For all his talk of 'avoiding the Ultimate catastrophe of Neil Kinnock in 10 Downing Street', Mr Heseltine has done more than anyone else to bring that 'catas- trophe' from the realm of the possible to the probable. 'The worst possible outcome [for the Tory party]' we said last week, 'would be a first ballot in which Mrs Thatcher won but Mr Heseltine gained enough votes to humiliate her.' That is what has happened. It is harder than ever to see what Mr Heseltine believed he could achieve, other than the destruction of the Prime Minister. Evidently he was surprised that he gained as much support as he did. But even as he puts his name down for the second round, Mr Heseltine must imagine that the most likely result is a narrow and therefore deeply divisive victory for the Prime Minister. What gain is there in that for the Conservative Party, whose good Mr Heseltine apparently considers to be more desirable even than his own advancement?

While Mrs Thatcher can be criticised for the astonishing speed with which she put her name down for the second ballot — demonstrating once again that she consid- ers that she needs no advice on what is in the interests of the party and the nation — she does still command a majority of the Party in a secret ballot. Doubtless Mrs Thatcher's tenacity — at least as we go to press — has beeti increased by the know- ledge that if she were to go now, she would have lost the vital opportunity to fight Britain's corner at the Rome Inter- governmental Conferences next month. But that aside, if anyone should have stood down in the interests of party unity, it should have been Michael Heseltine.

It has been argued that the best outcome for the party would have been for Mrs 'Thatcher to have allowed Douglas Hurd to step forward as a candidate. Now Mr Hurd is a fine fellow; he walks slowly with his hands behind his back, like a proper statesman. But the party has no idea where Mr Hurd stands on the issues, except that he has never demurred from any of the policies which Mrs Thatcher has pursued.

In a defence of both Mr Heseltine's and Mrs Thatcher's conduct — and it is a defence which both have essayed — they have been and are playing by the rules. To that extent it is the absurd system of rules for the election of the leader of the Conservative Party which must take the blame for this fiasco. It is sad that it should have been a direct consequence of the actions of Lord Home, a man whose devotion to the unity of the Conservative Party is matchless. But as 14th Earl he seemed to have felt some guilt at his promotion to the premiership, and allowed a crude elective system tp be substituted for one which always had the merits of not escalating an inevitably awkward process to the point of open warfare. The old system of consultation, with careful weighting of the views of cabinet ministers and backbenchers, might not have pre- served Mrs Thatcher's job on this occasion, but it would certainly have avoided the wreckage which seems now almost inevit- able, and in which the votes of the few embittered old backbenchers may well have ensured that Mrs Thatcher failed to gain the necessary four extra votes for outright victory.

The spectacle of Mr Heseltine's most ardent proselytisers in this contest is in- deed a pathetic one — in the main a cavalcade of unwise old men, knighted by Mrs Thatcher, as familiar with the board rooms of the city as with the House of Commons, and united above all in bitter- ness that 11 years of Tory government have passed without their gaining any political preferment. These are the Heathites of old, who have recognised that this party leader will not retreat to embrace corporat- ism as his predecessor did, and that there- fore a 1972 style U-turn can be accom- plished this time not by a change of mind, but only by a change of leader. But the leader they would foist on the party and the country is a man who has described himself as 'a market-led politician'. As the Haymarket publishing business which Mr Heseltine founded is concerned with iden- tifying markets for specialist magazines which require little flair or initiative, so has he now identified the poll tax and Europe as 'markets' for his own political profit, without contributing any original or con- structive thinking to these issues. By his own adission, Mr Heseltine is no market leader; nor is he qualified to be leader of his country.

Our advice to the party last week was that it should attempt to ensure a decisive victory for Mrs Thatcher in the first ballot, that this would have been in the best interests of the party — in what is fun- damentally a party matter. Now the situa- tion is even more clear cut. As we go to press there is little chance of a third 'healing' candidate emerging. It is Thatch- er or Heseltine, and the best result would be a clear victory for the Prime Minister in the second ballot.