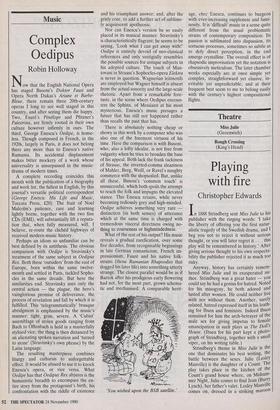 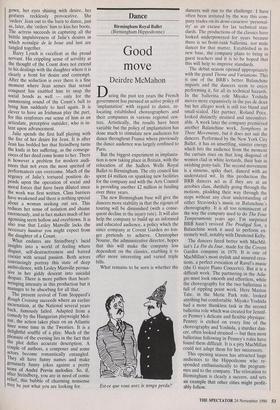 In 1888 Strindberg sent Miss Julie to his publisher with the ringing words: 'I take the liberty of offering you the first natur- alistic tragedy of the Swedish drama, and I beg you not to reject it without serious thought, or you will later regret it . . . this play will be remembered in history.' After giving serious thought to his own respecta- bility the publisher rejected it as much too risky.

Anyway, history has certainly remem- bered Miss Julie and its exasperated au- thor. Strindberg was a great hater — you could say he had a genius for hatred. Noted for his misogyny, he both adored and lusted after women. He could neither live with nor without them. Another, surely related, hatred expressed itself in his loath- ing for Ibsen and feminists. Indeed Ibsen remained for him the arch-betrayer of the male sex for giving impetus to female emancipation in such plays as The Doll s House. (Ibsen for his part kept a photo- graph of Strindberg, together with a small viper, on his writing table.) Strindberg's theme in Miss Julie is the one that dominates his best writing, the battle between the sexes. Julie (Lesley Manville) is the daughter of a Count. The play takes place in the kitchen of the Count's grand house where, on Midsum- mer Night, Julie comes to find Jean (BarrY Lynch), her father's valet. Lesley Manville comes on, dressed in a striking maroon gown, her eyes shining with desire, her gestures recklessly provocative. She 'orders' Jean out to the barn to dance, just as, later, she 'orders' him to kiss her boots. The actress succeeds in capturing all the brittle impulsiveness of Julie's desires in which nostalgie de la boue and lust are tangled together.

Barry Lynch is excellent as the proud servant. His crippling sense of servility at the thought of the Count does not extend to his dealings with the daughter where it is clearly a front for desire and contempt. After the seduction is over there is a fine moment where Jean senses that sexual conquest has enabled him to snap the social bonds as well — only for the summoning sound of the Count's bell to bring him suddenly to heel again. It is clever to have an Irishman play the part, for this reinforces our sense of him as an articulate, perceptive outsider, who is in- tent upon advancement.

Julie spends the first half playing with the fire of her desire for Jean. It is after Jean has bedded her that Strindberg turns the knife in her suffering, as the consequ- ences of her deed come home to her. There is however a problem for modern audi- ences that not even the most spirited of performances can overcome. Much of the urgency of Julie's tortured position de- pends upon the operation of social and moral forces that have been diluted since the work was first written. Class barriers have weakened and there is nothing special about a woman seeking out sex. This reduces her sense of isolation and shame enormously, and in fact makes much of her agonising seem hollow and overblown. It is also true that Lesley Manville lacks the necessary hauteur you might expect from the daughter of a Count.

What endures are Strindberg's lucid insights into a world of feeling where disgust, self-destructiveness and hatred coexist with sexual passion. Both actors convincingly portray this state of deep ambivalence, with Lesley Manville persua- sive in her giddy descent into suicidal despair. There is more pathos than heart- Wringing intensity in this production but it manages to be absorbing for all that.

The present revival of Tom Stoppard's Rough Crossing succeeds where an earlier incarnation, at the National several years back, famously failed. Adapted from a comedy by the Hungarian playwright Mol- nar, the action takes place on an Atlantic liner some time in the Twenties. It is a delightful soufflé of a play. Much of the Pleasure of the evening lies in the fact that the plot defies accurate description. A Couple of authors, a composer and some actors become romantically entangled. They all have funny names and make genuinely funny jokes against a pretty score of Andre Previn melodies. So, if, after Strindberg, you are in need of comic relief, this bubble of charming nonsense may be just what you are looking for.