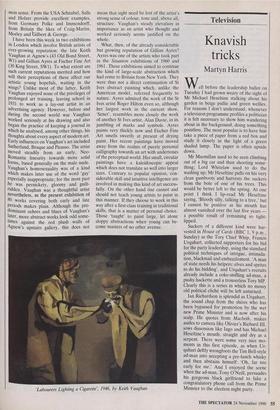 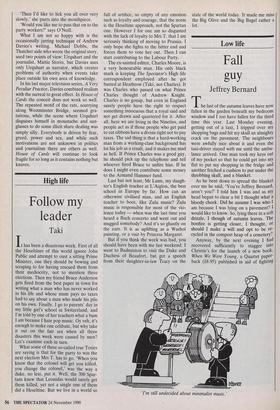 ell before the leadership ballot on W Tuesday I had grown weary of the sight of Mr Michael Heseltine stalking about his garden in beige pullie and green wellies. For reasons I don't understand, whenever a television programme profiles a politician it is felt necessary to show him wandering about in the background, doing something pointless. The most popular is to have him take a piece of paper from a red box and study it closely in the light of a green shaded lamp. The paper is often upside down.

Mr Macmillan used to be seen climbing out of a big car and then shooting some- thing; Lord Whitelaw used to do the washing up; Mr Heseltine pulls on his very clean gumboots and harvests the suckers 'from the bole of one of his trees. This would be better left to the spring. At one point I think I lip-read Mr Heseltine saying, 'Bloody silly, talking to a tree,' but I cannot be positive as his mouth has almost vanished over the last five years — a possible result of remaining so tight- lipped.

Suckers of a different kind were har- vested in House of Cards (BBC 1,9 p.m., Sunday) as the Tory Chief Whip, Francis Urquhart, collected supporters for his bid for the party leadership, using the standard political techniques of intrigue, intimida- tion, blackmail and embezzlement. 'A man of state needs his helpers: elves and sprites to do his bidding', and Urquhart's recruits already include a coke-sniffing ad-man, a pushy hackette and a trouserless Tory MP. Clearly this is a series in which no mossy old political cliché will be left unturned.

Ian Richardson is splendid as Urquhart, the sound chap from the shires who has been bypassed for promotion by the wet new Prime Minister and is now after his scalp. He quotes from Macbeth, makes asides to camera like Olivier's Richard III, sows dissension like Iago and has Michael Heseltine's mouth: straight and dry as a serpent. There were some very nice mo- ments in this first episode, as when Ur- quhart deftly wrongfoots the Tim Bell-style ad-man into accepting a pre-lunch whisky and then abstains himself: 'Oh, far too early for me.' And I enjoyed the scene when the ad-man, Tony O'Neill, persuades his gorgeous black girlfriend to fake a congratulatory phone call from the Prime Minister to the election night party. 'Then I'd like to lick you all over very slowly,' she purrs into the mouthpiece.

'Would you like me to pass that on to the party workers?' says O'Neill.

What I am not so happy with is the occasionally jarring technique of Andrew Davies's writing. Michael Dobbs, the Thatcher aide who wrote the original story, used two points of view: Urquhart and the journalist, Mattie Storin, but Davies uses only Urquhart as narrator, which creates problems of authority when events take place outside his own area of knowledge.

In his last major television series, A Very Peculiar Practice, Davies combined realism with the surreal to great effect. In House of Cards the conceit does not work so well. The repeated motif of the rats, scurrying along Westminster Bridge, seemed gra- tuitous, while the scene where Urquhart disguises himself in moustache and sun- glasses to do some illicit share dealing was simply silly. Everybody is driven by fear, greed, power and sex, and while such motivations are not unknown in politics and journalism there are others as well. House of Cards will continue to look fragile for so long as it contains nothing but knaves.