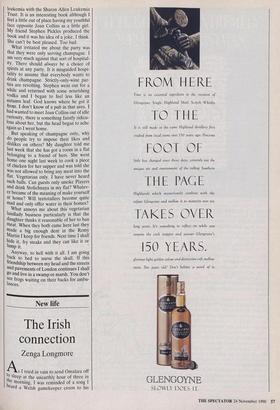 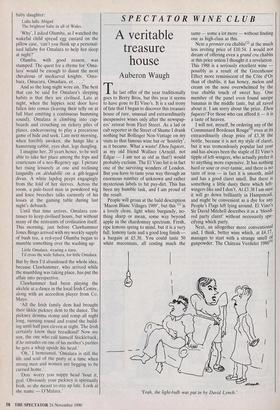 As I tried in vain to send Ornalara off tu sleep at the unearthly hour of three in he morning, I was reminded of a song I neard a Welsh gamekeeper croon to his

The brightest babe in all of Wales.

'Why', I asked Olumba, as I watched the wakeful child spread egg custard on the pillow case, 'can't you think up a personal- ised lullaby for Omalara to help her sleep at night?'

Olumba, with good reason, was stumped. The quest for a rhyme for 'Oma- lara' would be enough to daunt the most chivalrous of mediaeval knights. 'Oma- bara, Omacara, Omadara, er. . .

And so the long night wore on. The best that can be said for Omalara's sleeping habits is that they are civilised. Late at night, when the hippies next door have fallen into comas (leaving their telly on at full blast emitting a continuous humming sound), Omalara is climbing into cup- boards and crouching on rickety piles of plates, endeavouring to play a precarious game of hide and seek. Late next morning, when forcibly awoken, she hangs like a hamstrung rabbit, eyes shut, legs dangling.

I imagine her, 20 years hence, to be well able to take her place among the fops and courtesans of a neo-Regency age. I picture her rising leisurely at one and reclining languidly en deshabille on a gilt-legged divan. A white lapdog peeps engagingly from the fold of her sleeves. Across the room, a pale-faced man in powdered wig and knee breeches talks earnestly of his losses at the gaming table during last night's debauch.

Until that time arrives, Omalara con- tinues to keep civilised hours, but without many of the restraints of civilisation itself. This morning, just before Clawhammer Jones Bingo arrived with my weekly supply of bush tea, a red-eyed Olumba began to mumble something over the washing up:

I'd cross the wide Sahara, for little Omalara.

But by then I'd abandoned the whole idea, because Clawhammer, who arrived while the mumbling was taking place, has put the affair into perspective.

Clawhammer had been playing the ukelele at a dance in the local Irish Centre, along with an accordion player from Co. Mayo.

'All the Irish family dem had brought their likkle pickney dem to the dance. The pickney demma stomp and romp all night long, running round and round the build- ing until half past eleven at night. The Irish certainly know their breadkind! Now iny son, the one who call himself Stickleback, if he intrudes on one of his mother's parties he gets a whap upside his head.'

'Oh,' I bemoaned, 'Omalara is still the life and soul of the party at a time when strong men and women are begging to be carried home.'

'Don' worry you nappy head 'bout it, gyal. Obviously your pickney is spiritually Irish, so she meant to stay up late. Look at she name — O'Malara.'