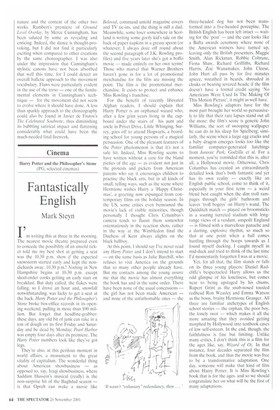 Im writing this at three in the morning. The nearest movie theatre prepared even to concede the possibility of an unsold ticket told me my best shot at getting a seat was the 10.30 p.m. show if the expected snowstorm started early and kept the nondiehards away. 10.30 p.m.! Nothing in New Hampshire begins at 10.30 p.m. except short-order cooks getting an early start on breakfast. But duty called, the flakes were falling, so I drove an hour and, snowfall notwithstanding, was lucky to get a seat at the back. Harry Potter and the Philosopher's Stone broke box-office records in its opening weekend, pulling in more than $90 million. But forget that headline-grabber: these days, any old bit of junk can rake in a ton of dough on its first Friday and Saturday and be dead by Monday; Pearl Harbor was empty four days after its premiere. The Harry Potter numbers look like they've got legs.

They're also, at this perilous moment in world affairs, a monument to the great vitality of capitalism. The wonderful thing about American showbusiness — as opposed to, say, Iraqi showbusiness, where Saddam Hussein's musical (really) is the non-surprise hit of the Baghdad season — is that Oprah can make a movie like

Beloved, command untold magazine covers and TV tie-ins, and the thing is still a dud. Meanwhile, some loser somewhere in Scotland is writing some goofy kid's tale on the back of paper napkins in a greasy spoon (or whatever; I always doze off round about the second paragraph of J.K. Rowling profiles) and five years later she's got a boffo movie — made entirely on her own terms! Those who marvel that Warner Brothers haven't gone in for a lot of promotional merchandise for the film are missing the point. The film is the promotional merchandise. It exists to protect and enhance Miss Rowling's franchise.

For the benefit of recently liberated Afghan readers, I should explain that Harry Potter is an orphaned wizard who, after a few grim years living in the cupboard under the stairs of his aunt and uncle in Privet Drive, Little Whinging, Surrey, goes off to attend Hogwarts, a boarding school for young persons of a magical persuasion. One of the pleasant features of the Potter phenomenon is that it's not a safe hit. Indeed, Miss Rowling seems to have written without a care for the bland pieties of the age — as evident not just in the protests and pickets from American parents who say it encourages children to practise the black arts, but in all kinds of small, telling ways, such as the scene where Hermione wishes Harry a 'Happy Christmas', a greeting now expunged from contemporary films on the holiday season. In the US, some critics even bemoaned the movie's lack of visible minorities, though personally I thought Chris Columbus's camera tends to flaunt them somewhat ostentatiously in the reaction shots, rather in the way at the Wimbledon final the Duchess of Kent always alights on the black ballboy.

At this point. I should say I've never read any Ham, Potter and I don't intend to start — on the same basis as Julie Burchill, who refuses to visit America on the grounds that so many other people already have. But my contacts among the young assure me that the movie has almost everything the book has and in the same order. There have been none of the usual concessions — the girl has not been made American — and none of the unfathomable ones — the

three-headed dog has not been transformed into a five-headed porcupine. The British English has been left intact — waiting for the 'post' — and the cast looks like a Bafta awards ceremony where none of the American winners have turned up, leaving only the British presenters. Maggie Smith, Alan Rickman, Robbie Coltrane, Fiona Shaw, Richard Griffiths, Richard Harris, Zoe Wanamaker, John Cleese, John Hurt all pass by for five minutes apiece, wreathed in beards, shrouded in cloaks or bearing severed heads; if the film doesn't have a formal credit saying 'No Americans Were Used In The Making Of This Motion Picture', it might as well have.

Miss Rowling's adaptors have for the most part brought her world so persuasively to life that their rare lapses stand out all the more: the film's score is generic John Williams, the sort of swooping wallpaper he can do in his sleep for Spielberg; similarly, the scene when a large egg cracks and a baby dragon emerges looks too like the familiar computer-generated hatchings from Jurassic Park, Godzilla et al. For a moment, you're reminded that this is, after all, a Hollywood movie. Otherwise. Chris Columbus has created an extraordinarily detailed look that's both fantastic and yet has its own reality — exactly like an English public school, come to think of it, especially in your first term — a weird blend best caught when the dim troll rampages through the girls' bathroom and leaves 'troll bogeys' on Harry's wand. The Ouidditch match — played on broomsticks in a soaring turreted stadium with longrange views of a verdant. unspoilt England — is filmed with a marvellous panache and a darting, explosive rhythm, so much so that at one point when a ball comes hurtling through the hoops towards us I found myself ducking. I caught myself in mid-duck and tried to think of the last time I'd momentarily forgotten [was at a movie.

Yet, for all that, the film stands or falls on its three young players: Daniel Radcliffe's bespectacled Harry allows us the odd glimpse of his loneliness, but comes near to being upstaged by his chums, Rupert Grint as the snub-nosed tousled redhead Ron Weasley and Emma Watson as the bossy, brainy Hermione Granger. All three are familiar archetypes of English school stories — the orphan, the poor boy, the lonely swot — which makes it all the more amazing that they avoided getting morphed by Hollywood into textbook cases of low self-esteem. In the end, though, the faithfulness is fine but limiting. Unlike many critics, I don't think this is a film for the ages like, say, Wizard of Oz. In that instance, four decades separated the film from the book, and thus the movie was free to be a transformative adaptation. One day, someone will make that kind of film about Harry Potter. It is Miss Rowling's book that is for the ages, and so we should congratulate her on what will be the first of many adaptations.