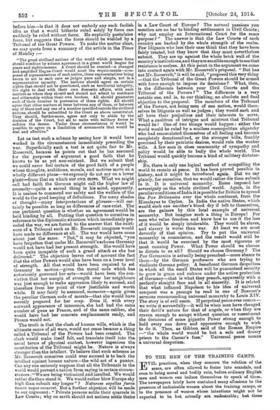 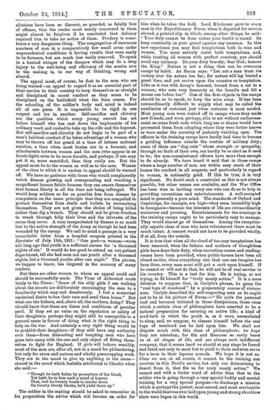 TO THE KEN OF THE TRAINING CAMPS.

EVIL practices, when they concern the relation of the sexes, are often allowed to fester into scandals, and even to bring moral and bodily ruin, before ordinary English men and women can induce themselves to speak of them. The newspapers lately have contained many allusions to the presence of undesirable women about the training camps, or to the presence of women whose intentions might not be expected to be but actually are undesirable; but these allusions have been so discreet, so guarded, so fatally free of offence, that the reader most nearly concerned in them might almost be forgiven if he concluded that delicacy required him to take no notice of them. Prudery is some- times a very dangerous thing. The congregation of enormous numbers of men in a comparatively few small areas under unprecedented conditions is having results that were easily to be foreseen, but are much less easily removed. To speak

in a hushed whisper of the dangers which may do a deep injury to the well-being and efficiency of the armies now in the making is, to our way of thinking, wrong and

The appeal musty of course, be first to the men who are being trained—an appeal to regard it as an essential part of their service to their country to keep themselves as straight and disciplined in moral conduct as they mean to be disciplined on the battlefield when the time comes. For the schooling of the soldier's body and mind is indeed all of one piece.. It is impossible to be rigid in one respect and lax in another. Self-sacrifice and chivalry are the qualities which every young recruit has set before himself who has cast down the implements of his ordinary work and rushed to take up the rifle and the bayonet.

But self-sacrifice and chivalry do not begin to be part of a man's habitual conduct if he takes advantage of a. woman who may be thrown off her guard at a time of intense national emotion, a time when most brains are in a ferment, and attachments between women and the men (who appear in an heroic light) seem to be more durable, and perhaps, if one may put it so, more sanctified, than they really are. But the appeal must be to the women. as well as to the men. Women of the class to which it is useless to appeal should be warned off. We have no patience with those who would complacently watch disease growing and overspreading and wrecking a magnificent human fabric because they can assure themselves that human liberty is all the time not being infringed. We would keep soldiers so far as possible free from disease by compulsion on the same principle that they are compelled to protect themselves from shells and bullets by entrenching themselves. They are not given the choice of being killed rather than dig a trench. They should not be given freedom to wreck through folly their lives and the interests of the cause they serve. A man incapacitated by disease is as much lost to the active strength of the Army as though he had been wounded by the enemy. We call to mind a passage in a very remarkable letter from a hospital surgeon printed in the Spectator of July 15th, 1911: " One poet—a woman—wrote not long ago that youth is a sufficient excuse for ' a thousand nights of sin.' It would do her good to attend an out-patient department, till she had seen not one youth after a thousand nights, but a. thousand youths after one night." The phrase, we happen to know, has lingered in the memory of many readers.

But there are other women to- whom an appeal could and should be successfully made. The- Vicar of Aldershot wrote lately to the Times "Some of the- silly girls I see walking about the streets are deliberately encouraging the men to a familiarity which may end disastrously. I feel a somewhat unclerical desire to box their ears and send them home." But what are the fathers, and, above all, the mothers, doing P They should know that these are times and conditions of peculiar peril. If they set no value on the reputation or safety of their daughters, perhaps they might still be susceptible to a general sense in favour of doing what is the right thing to help on the war. And certainly a. very right thing would be to prohibit their daughters—if they still have any authority over them—from distracting and tempting men who have gone into camp with the one and only object of fitting them- selves to fight for England. If girls will behave sensibly, most of the men are, after all, not in a mood for philandering,

but only for stern and serious and wholly preoccupying work. They are in the mood to give up anything to the cause—

almost in the mood which Isabella attributed to Claudio when she said :— " Though he hath fallen by prompture of the blood, Yet hath he in him such a mind of honour That, had he twenty heads to tender down On twenty bloody blocks, he'd yield them up."

The soldier in the making should be asked to remember in his preparation the advice which will become an order for him when he takes the field. Lord Kitchener gave to every man in the Expeditionary Force, when it departed for service abroad, a printed slip in which, among other things, he said: " Your duty cannot be done unless your health is sound. So keep constantly on your guard against any excesses. In this new experience you may find temptations both in wine and women. You must entirely resist both temptations, and, while treating all women with perfect courtesy, you should avoid any intimacy. Do your duty bravely; fear God ; honour the King." Nature is not a thing that can be overcome except by habit. As Bacon says: "Let not a man trust his victory over his nature too far; for nature will lay buried a great time, and yet revive upon the occasion or temptation. Like as it was with Aesop's damosel, turned from a cat to a woman; who sate very demurely at the board's end till a mouse ran before her." One of the first objects in the camps should be, so to speak, to keep the mice away. It has been extraordinarily difficult to supply what may be called the auxiliaries of restraint just when restraint is most needed. Most young men were rushed off to camps where they made new friends, and were, perhaps, able to act without embarrass- ment on some fresh code which long use or shame would have prevented them from adopting where they were better known or were under the scrutiny of jealously watching eyes. The officers in the training camps have hardly had time to become a guiding influence outside the routine of military duty; some of them are " dug outs " whose strength or sympathy, through no fault of their own, can hardly be so alert as it used to be; the non-commissioned officers have more than enough to do already. We have heard it said that in those camps where a large number of men are within easy reach of their homes the conduct in all respects, and particularly in regard to women, is noticeably good. If this be true, it is very significant. No doubt such a constraint as this is not always possible, but other means are available, and the War Office has been wise in inviting every one who can do so to help in providing recreations and entertainments. A well-occupied mind is generally a pure mind. The standards of Oxford and Cambridge, for example, are high—they seem incredibly high to foreigners—because the interests of life are extraordinarily numerous and pressing. Entertainments for the evenings in the training camps ought to be particularly easy to manage. They would almost go of themselves. Among the exception- ally capable class of men who have volunteered there must be much talent. A concert would not have to be provided wholly, if at all, from the outside.

It is true that when all the cloud of too easy temptations has been removed, when the fathers and mothers of thoughtless girls have done their duty, when recreation-rooms and reading- rooms have been provided, when public-houses have been all closed earlier, when everything else that one can imagine has been done, every man must still put a curb upon himself. If he cannot or will not do that, he will not be of real service to his country. This is a test for him. He is trying, or not trying, to fit himself for "truly manly action." It is a mere delusion to suppose that, in Carlyle's phrase, he gains the "real toga of manhood" by a preparatory course of vicious- ness. Carlyle described the self-respecting man as he ought not to be in his picture of Burns :—" He quits the paternal roof and becomes initiated in those dissipations, those vices which a certain class of philosophers have asserted to be a natural preparation for entering on active life ; a kind of mud-bath in which the youth is, as it were, necessitated to sleep, and, we suppose, to cleanse himself before the real toga of manhood can be laid upon him. We shall not dispute much with this class of philosophers ; we hope they are mistaken; for Sin and Remorse so easily beset

us at all stages of life, and are always such indifferent company, that it seems hard we should at any stage be forced and fated not only to meet but to yield to them and even serve

for a term in their leprous armada. We hope it is not so. Clear we are, at all events, it cannot be the training one

receives in this Devil's service, but only our determining to

desert from it, that fits us for truly manly action." We cannot end with a better word of advice than that to the soldier who is going through a very special bodily and mental training for a very special purpose—to discharge a mission which is perhaps the justest, most sacred, and most serviceable to the world thatwas ever laid upon young and strong shoulders since wars began in this world.