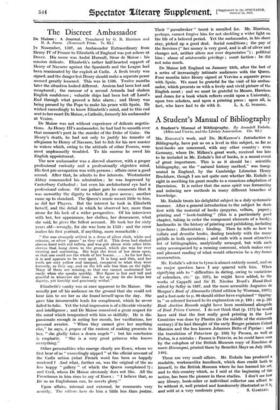 The Discreet Ambassador De Maisse : A Journal. Translated by

G. B. Harrison and R. A. Jones. (Nonesuch Press. 7s. 6d.) IN November, 1597, an Ambassador Extraordinary from Henry IV of France to Elizabeth of England was put ashore at Dover. His name was Andre Hurault, Sieur de Maisse : his mission delicate. Elizabeth's rather half-hearted support of Henry of Navarre against the Spaniards and the League had been reanimated by the exploit at Cadiz. A fresh treaty was signed, and the danger lest Henry should make a separate peace seemed greatly lessened. This was in 1596. Twelve months later the situation looked different. Amiens had been lost and recaptured ; the rumour of a second Armada had shaken English confidence ; valuable ships had been lost off Land's End through what proved a false alarm ; and Henry was being pressed by the Pope to make his peace with Spain. He wished exceedingly to know Elizabeth's mind, and to this end

sent to her court De Maisse, a Catholic, formerly his ambassador at Venice.

De Maisse was not without experience of delicate negotia- tions. As Henry III's ambassador, he had had to smooth over that monarch's part in the murder of the Duke of Guise. On Henry's death, he had not only to justify his transfer of allegiance to Henry of Navarre, but to fish for his new master in waters which, owing to the attitude of other Powers, were most unpleasantly troubled. To his success he owed his English appointment.

The new ambassador was a shrewd observer, with a proper professional curiosity and a professionally objective mind. His first pm-occupation was with persons : affairs came a good second. After that, he admits to few interests. Westminster Abbey commanded his admiration ; he was impressed by Canterbury Cathedral : but even his architectural eye had a professional colour. Of one palace gate he comments that it was unworthy the dignity to which it gave access ; another came up to standard. The Queen's music meant little to him, as did her Players. But the interest he took in Elizabeth herself, and the detail in which he observed her, more than atone for his lack of a wider perspective. Of his interviews with her, her appearance, her clothes, her demeanour, what she said, he gives the fullest account. He took her for sixty years old—wrongly, for she was born in 1533: and the error makes his first portrait, if anything, more remarkable : " She was strangely attired in a dress of silver cloth, white and crimson, or silver gauze ' as they call it. This dress had slashed sleeves lined with red taffeta, and was girt about with other little sleeves that hung down to the ground, which she was for ever twisting and untwisting. She kept the front of her dress open, so that one could see the whole of her bosom. . . . As for her face, it is and appears to be very aged. It is long and thin, and her teeth are very yellow and unequal, compared to what they were formerly, so they say, and on the left side less than on the right. Many of them are missing, so that one cannot understand her easily when she speaks quickly. Her figure is fair and tall and graceful in whatever she does ; so far as may be she keeps her dignity, yet humbly and graciously withal."

Elizabeth's vanity was at once apparent to De Maisse. She usually put off his audience on the ground that she could not bear him to see her as she found herself upon the day. She gave him innumerable leads for compliment, which he never failed to take. Yet the total impression is of a likeable vivacity and intelligence ; and De Maisse conceived a great respect for the mind which temporized with him so skilfully. He is dis- passionate enough in noting her moods, her vacillations, her personal avarice. " When they cannot give her anything else," he says, a propos of the custom of making presents to , her, " she gladly takes a dozen angels " : but his conclusion is emphatic. " She is a very great princess who knows everything."

Other personalities who emerge clearly are Essex, whom we first hear of as " exceedingly nipped " at the official account of the Cadiz action (what French word has been so happily rendered ? And what, further on, was the original of the no less happy " gullery " of which the Queen complained ?) : and Cecil, whom De Maisse obviously does not like. All the Frenchman in him rises to say of Essex : " I believe that, so far as an Englishman can, he covets glory."

Upon affairs, internal and external, he comments very acutely. The editors here do him a little less than. justice. Their " pawnbroker " taunt is uncalled for. Mr. Harrison, perhaps, cannot forgive him for not shedding a wider light on the life of a beloved period. Yet the ambassador, in his short stay, picked up a good deal. Social conditions ; the pay of the Services (" her money is very good, and is all of silver and changes not, neither alters nor ever depreciates ") : political bias : abuse of aristocratic privilege : court faction : he did not miss much.

De Maisse left England on January 18th, after the last of a series of increasingly intimate audiences with the Queen. Four months later Henry signed at Vervins a separate peace with Spain. We must be grateful for the visit of his ambas- sador, which presents us with a lively and vivid picture of the English court : and we must be grateful to Messrs. Harrison and Jones for a book which reflects credit upon a University, upon two scholars, and upon a printing press : upon all, in