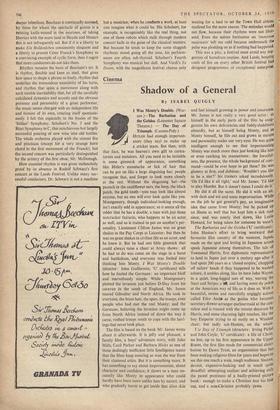 Shadow of a General

By ISABEL QUIGLY I Was Monty's Double. (War- ner.)—The Barbarian and the Geisha. (Leicester Square Theatre.) — The Day of Triumph. (Cameo-Poly.) HITLER had enough imperson- ators (they say) to make up a cricket team. But then, with that face, he was heaven's own gift to carica- turists and imitators. All you need to be imitable is some gimmick of appearance, something like Hitler's moustache or lick of hair that can be put on like a large disguising hat; people recognise that, and forget to look more closely at the rest. Without the disguising hat—the paunch or the cauliflower ears, the limp, the black patch, the gold tooth—you may look like almost anyone, but no one will ever look quite like you. Montgomery, though individual-looking enough, isn't exactly odd in appearance; so it seems all the odder that he has a double, a man with just those nutcracker features, who happens to be an actor. as well, and so is trained to put on another's per- sonality. Lieutenant Clifton James was no great shakes in the Pay Corps at Leicester; but then he was no great shakes in civilian life as an actor, and he knew it. But he had one little gimmick that could always, raise a cheer at Army shows : all he had to do was come on the stage in a beret and battledress, and everyone was fooled into thinking him Monty. I Was Monty's Double (director : John Guillermin; certificate) tells how he fooled the Germans : an important bluff and marvellously simple. While Montgomery plotted the invasion just before D-Day from his caravan in the south of England, Mr. James toured Gibraltar and North Africa. He took in everyone, the brass hats, the spies, the troops, even people who had met the real Monty; and the Germans, believing the invasion might come up from North Africa instead of down the way it came, rushed troops south to cope with the land- ings that never took place.

The film is based on the book Mr. James wrote about it afterwards. It is jolly and pleasant, a family film, a boys' adventure story, with John Mills, Cecil Parker and Barbara Hicks as one of those dashingly inefficient little Intelligence teams that the films keep assuring us won the war from their cluttered attics. But it is something more. It has something to say about impersonation, about character and confidence; it shows us a man un- cannily like Monty in appearance who could hardly have been more unlike him by nature, and who gradually learnt to get inside that alien skin and feel himself growing in power and assurance. Mr. James is not really a very good actor : as himself in the early parts of the film he exag- gerates his own deficiencies and fuddy-duddiness absurdly, but as himself being Monty, and as Monty himself, he fills out and grows in stature and personality under our very eyes. He was quite intelligent enough to see that impersonating Monty was much more than just looking like him or even catching his mannerisms : the forceful- ness, the presence, the whole background of com- mand—could he ever hope to get these? He was gloomy at first, and dubious : 'Wouldn't you like to be a star?' his trainers asked incredulously. 'Oh I'd like it all right,' said Mr. James. 'I'd like to play Hamlet. But it doesn't mean I could do it: He did it all the same. He did it with an air, with dash and wit and some improvisation. While on the job he got general's pay, an imaginative idea that came from Monty; but he picked up an illness as well that has kept him a sick man since, and was nearly shot down, like Leslie Howard, for being taken for someone he wasn't.

The Barbarian and the Geisha (`U' certificate): John Huston's effort to bring westward that favourite film country of the moment, Japan, made on the spot and letting its Japanese actors speak Japanese among themselves. The tale of Townsend Harris, first diplomatic representative to land in Japan just over a century ago after it had spent 200 years as a 'closed empire,' chopping off sailors' heads if they happened to be washed ashore, it ambles along, like its hero John Wayne, in a quiet, long-legged sort of way, waving the Stars and Stripes a l, and having some sly pokes at the American way of life as it does so. With a beautiful, serene and mercifully ungiggly actress called Eiko Ando as the geisha who becomes secretary-flower-arranger-parlourmaid at the coil- sulate and is treated with the utmost decorum WI Harris, and some charming light touches, like the boy Emperor trying to sit easily on a Windsor chair; but sadly sub-Huston, on the whole. T.'w Day of Triumph (directors : Irving Pichel and John Coyle; certificate): a life of Christ, no less, up to his first appearance in the Upper Room, the first film made for commercial distri- bution by Dawn Trust, an organisation that has been making religious films for years and hopes to see this one reach a wide, tough audience. Sincere, devout, expensive-looking and in result quite dreadful; attempting realism and achieving only the pastel prettiness of a. badly-printed picture book : enough to make a Christian tear his hair out, and a non-Christian probably yawn.