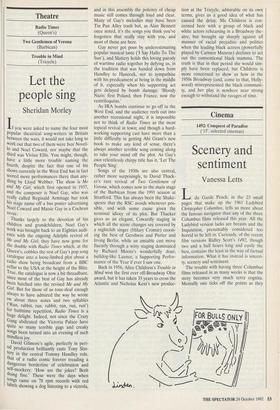 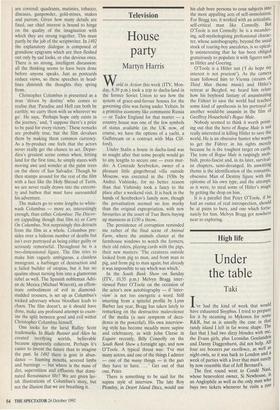 Ldu Garde Peach, in the 23 small pages that make up the 1961 Ladybird Christopher Columbus, tells us more about the famous navigator than any of the three Columbus films released this year. All the Ladybird version lacks are breasts and the Inquisition, presumably considered too horrid to be left in. Curiously, of the recent film versions Ridley Scott's 1492, though two and a half hours long and easily the best, contains the least in the way of factual information. What it has instead is sinceri- ty, scenery and sentiment.

The trouble with having three Columbus films released in as many weeks is that the story becomes very much terra cognita. Mentally one ticks off the points as they

are covered: quadrants, mutinies, tobacco, diseases, gunpowder, gold-mines, snakes and parrots. Given how many details are fixed, our chief interest is bound to hinge on the quality of the imagination with which they are strung together. This must partly be the job of the scriptwriter. In 1492 the explanatory dialogue is composed of grandiose epigrams which are then fleshed out only by sad looks, or else devious ones. There is no strong, intelligent discussion: all the thinking seems to have been done before anyone " speaks. Just as postcards reduce views, so these speeches in head- lines diminish the thoughts they spring from.

Christopher Columbus is presented as a man 'driven by destiny' who comes to realise that 'Paradise and Hell can both be earthly; we carry them with us wherever we go'. He says, 'Perhaps hope only exists in the journey,' and, 'I suppose there's a price to be paid for every victory.' These remarks are probably true, but the film devalues them by making them common currency. As a by-product one feels that the actors never really get the chance to act. Depar- dieu's greatest scene comes when, hitting land for the first time, he simply stares with moving awe and wonder at the palm trees on the shore of San Salvador. Though he then stamps around for the rest of the film with a face like the Holy Shroud of Turin, we are never really drawn into the extremi- ty and bathos that must have surrounded his adventure.

The makers go to some lengths to white- wash Columbus — more so, interestingly enough, than either Columbus: The Discov- ery (appalling though that film is) or Carry On Columbus. Not surprisingly this detracts from the film as a whole. Columbus pre- sides over a hideous number of deaths but isn't ever portrayed as being either guilty or seriously remorseful. Throughout he is a two-dimensional figure. The film tries to make him vaguely ambiguous, a classless immigrant, a harbinger of destruction and a failed builder of utopias, but it has no qualms about turning him into a glamorous rebel as well. The Spanish nobleman Adri- an de Mexica (Michael Wincott), an effem- inate embodiment of evil in diamond- studded trousers, is set up as Columbus's wicked adversary whose bloodlust leads to chaos. The film doesn't, as it should have done, make any profound attempt to exam- ine the split between good and evil within Christopher Columbus himself.

One looks for the lurid Ridley Scott trademarks. In Blade Runner and Alien he created terrifying worlds, believable because apparently coherent. Perhaps it's easier to invent the future than to imagine the past. In 1492 there is gore in abun- dance — foaming mouths, severed limbs and burnings — but where is the mass of dirt, superstition and effluents that domi- nated Renaissance life? We are given lav- ish illustrations of Columbus's story, but not the illusion that we are breathing it.