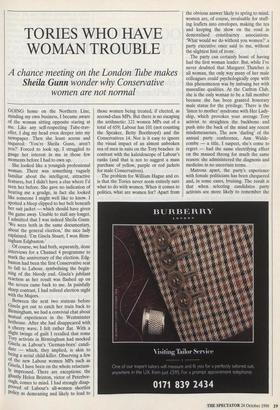 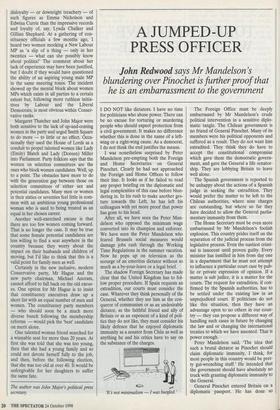 TORIES WHO HAVE WOMAN TROUBLE

A chance meeting on the London Tube makes

women are not normal

GOING home on the Northern Line, minding my own business, I became aware of the woman sitting opposite staring at me. Like any self-respecting Tube-trav- eller, I dug my head even deeper into my newspaper. Then she leant across and inquired: 'You're Sheila Gunn, aren't You?' Forced to look up, I struggled to gauge her interest in me in those few moments before I had to own up.

She looked like a youngish professional woman. There was something vaguely familiar about the intelligent, attractive features, but I didn't have a clue where I'd seen her before. She gave no indication of bearing me a grudge, in fact she looked like someone I might well like to know. I Spotted a bleep clipped to her belt beneath her suit jacket — which should have given the game away. Unable to stall any longer, I admitted that I was indeed Sheila Gunn. 'We were both in the same documentary, about the general election,' the nice lady explained. 'I'm Gisela Stuart, I won Birm- ingham Edgbaston.'

Of course, we had both, separately, done interviews for a Channel 4 programme to mark the anniversary of the election. Edg- baston had been the first Conservative seat to fall to Labour, symbolising the begin- ning of the bloody end. Gisela's jubilant reaction as her result was flashed up on the screen came back to me. In painfully Sharp contrast, I had relived election night With the Majors. Between the next two stations before Gisela got out to catch her train back to Birmingham, we had a convivial chat about mutual experiences in the Westminster hothouse. After she had disappeared with a .cheery wave, I felt rather flat. With a slight twinge of guilt I recalled that some Tory activists in Birmingham had mocked Gisela as Labour's 'German-born' candi- tiate — which, they implied, is akin to being a serial child-killer. Observing a few of the new Labour women MPs such as Gisela, I have been on the whole reluctant- ly Impressed. There are exceptions: the ghastly Helen Brinton, victor of Peterbor- °ugh, comes to mind. I had strongly disap- proved of Labour's all-women shortlist Policy as demeaning and likely to lead to those women being treated, if elected, as second-class MPs. But there is no escaping the arithmetic: 121 women MPs out of a total of 659; Labour has 101 (not counting the Speaker, Betty Boothroyd) and the Conservatives 14. Nor is it easy to ignore the visual impact of an almost unbroken sea of men in suits on the Tory benches in contrast with the kaleidoscope of Labour's ranks (and that is not to suggest a mass purchase of yellow, purple or red jackets for male Conservatives).

The problem for William Hague and co. is that the Tories never seem entirely sure what to do with women. When it comes to politics, what are women for? Apart from the obvious answer likely to spring to mind, women are, of course, invaluable for stuff- ing leaflets into envelopes, making the tea and keeping the show on the road in demoralised constituency associations. 'What would we do without you women?' a party executive once said to me, without the slightest hint of irony.

The party can certainly boast of having had the first woman leader. But, while I've never doubted that Margaret Thatcher is all woman, the only way many of her male colleagues could psychologically cope with this phenomenon was by imbuing her with masculine qualities. At the Carlton Club, she is the only woman to be a full member because she has been granted honorary male status for the privilege. There is the 'listen to mother' syndrome with Her Lady- ship, which provokes your average Tory activist to straighten the backbone and push into the back of the mind any recent misdemeanours. The new 'darling' of the annual party conference, Ann Widde- combe — a title, I suspect, she's come to regret — had the same electrifying effect on the massed throng for much the same reason: she administered the diagnosis and medicine in no uncertain terms.

Matrons apart, the party's experience with female politicians has been chequered and, in some cases, bruising. The result is that when selecting candidates party activists are more likely to remember the disloyalty — or downright treachery — of such figures as Emma Nicholson and Edwina Currie than the impressive records and loyalty of, say, Lynda Chalker and Gillian Shephard. At a gathering of con- stituency officials a few months ago, I heard two women mocking a New Labour MP as 'a slip of a thing — only in her twenties — what can she possibly know about politics!' The comment about her lack of experience may have been justified, but I doubt if they would have questioned the ability of an aspiring young male MP in the same sneering tones. The incident showed up the mental block about women MPs which exists in all parties to a certain extent but, following more ruthless initia- tives by Labour and the Liberal Democrats, is most obvious within Conser- vative ranks.

Margaret Thatcher and John Major were both sensitive to the lack of up-and-coming women in the party and urged Smith Square to do more — to little or no effect. Occa- sionally they used the House of Lords as a conduit to propel talented women like Lady (Emily) Blatch and Lady (Doreen) Miller into Parliament. Party folklore says that the women on selection committees are the ones who block women candidates. Well, up to a point. The obstacles have more to do with the generation gap between those on selection committees of either sex and potential candidates. Many men or women in their sixties or seventies feel little in com- mon with an ambitious young professional woman who is used to being treated as an equal in her chosen career.

Another well-exercised excuse is that there are too few women coming forward. That is no longer the case. It may be true that some female potential candidates are less willing to find a seat anywhere in the country because they worry about the impact on their husbands and children of moving, but I'd like to think that this is a valid point for family men as well.

Certainly in the new inclusive, modern Conservative party, Mr Hague and the new party chairman, Michael Ancram, cannot afford to fall back on the old excus- es. One option for Mr Hague is to insist that constituency executives draw up a short list with an equal number of men and women. The constituency party members — who should soon be a much more diverse bunch following the membership reforms — would pick the 'best' candidate on merit alone.

One talented woman friend searched for a winnable seat for more than 20 years. At first she was told that she was too young, then that she had a young family and so could not devote herself fully to the job, and then, before the following election, that she was too old at over 40. It would be unforgivable for her daughters to suffer the same fate.