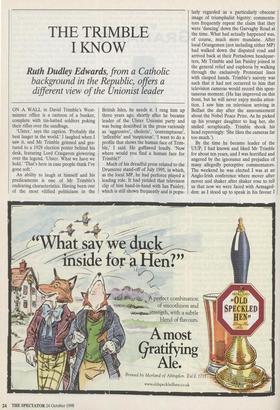 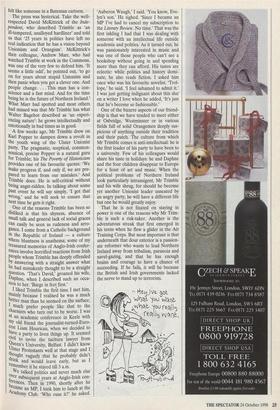 THE TRIMBLE I KNOW

Ruth Dudley Edwards, from a Catholic

background in the Republic, offers a different view of the Unionist leader

ON A WALL in David Trimble's West- minster office is a cartoon of a bunker, complete with tin-hatted soldiers poking their rifles over the sandbags.

'Ulster,' says the caption. 'Probably the best laager in the world.' I laughed when I saw it, and Mr Trimble grinned and ges- tured to a 1929 election poster behind his desk, featuring Lord Craigavon glowering over the legend, 'Ulster. What we have we hold.' That's here in case people think I've gone soft.'

An ability to laugh at himself and his predicaments is one of Mr Trimble's endearing characteristics. Having been one of the most vilified politicians in the British Isles, he needs it. I rang him up three years ago, shortly after he became leader of the Ulster Unionist party and was being described in the press variously as 'aggressive', choleric', 'contemptuous', 'inflexible' and 'suspicious'. 'I want to do a profile that shows the human face of Trim- ble,' I said. He guffawed loudly. 'Now where would you find a human face for Trimble?'

Much of his dreadful press related to the Drumcree stand-off of July 1995, in which, as the local MP, he had perforce played a leading role. It had yielded that television clip of him hand-in-hand with Ian Paisley, which is still shown frequently and is popu- larly regarded as a particularly obscene image of triumphalist bigotry: commenta- tors frequently repeat the claim that they were 'dancing' down the Garvaghy Road at the time. What had actually happened was, of course, much more mundane. After local Orangemen (not including either MP) had walked down the disputed road and arrived back at their Portadown headquar- ters, Mr Trimble and Ian Paisley joined in the general relief and euphoria by walking through the exclusively Protestant lines with clasped hands. Trimble's naivety was such that it had not occurred to him that television cameras would record this spon- taneous moment. (He has improved on this front, but he will never enjoy media atten- tion. I saw him on television arriving in Belfast the day after the announcement about the Nobel Peace Prize. As he picked up his younger daughter to hug her, she smiled seraphically. Trimble shook his head reprovingly: 'She likes the cameras far too much.') By the time he became leader of the UUP, I had known and liked Mr Trimble for about ten years, and I was horrified and angered by the ignorance and prejudice of many allegedly perceptive commentators. The weekend he was elected I was at an Anglo-Irish conference where mover after mover and shaker after shaker rose to tell us that now we were faced with Armaged- don: as I stood up to speak in his favour I felt like someone in a Bateman cartoon.

The press was hysterical. Take the well- respected David McKittrick of the Inde- pendent, who described Trimble as 'an ill-tempered, unalloyed hardliner' and told us that '25 years in politics have left no real indication that he has a vision beyond Unionism and Orangism'. McKittrick's then colleague, Andrew Marr, who had watched Trimble at work in the Commons, was one of the very few to defend him. 'It seems a little odd', he pointed out, `to go On for years about stupid Unionists and then panic when you get a clever one. And people change. . . . This man has a con- science and a fast mind. And for the time being he is the future of Northern Ireland.' What Marr had spotted and most others had missed was that Mr Trimble has what Walter Bagehot described as 'an experi- encing nature': he grows intellectually and emotionally in bad times as in good.

A few weeks ago, Mr Trimble drew on Karl Popper to dampen down a revolt in the youth wing of the Ulster Unionist party, The pragmatic, sceptical, common- sensical, precise Popper is a natural guru for Trimble; his The Poverty of Historicism Provides one of his favourite quotes: 'We make progress if, and only if, we are pre- pared to learn from our mistakes.' And Trimble does. He is self-critical without being angst-ridden. In talking about some Past event he will say simply, 'I got that wrong,' and he will seek to ensure that next time he gets it right. One of the reasons Trimble has been so disliked is that his shyness, absence of small talk and general lack of social graces can easily be seen as rudeness and arro- gance. I come from a Catholic background In the Republic of Ireland — a culture Where bluntness is anathema; some of my treasured memories of Anglo-Irish confer- ences involve horrified reactions from Irish People whom Trimble has deeply offended by answering with a straight answer what he had mistakenly thought to be a straight question. 'That's David,' groaned his wife, Daphne, when I described such an occa- sion to her. 'Barge in feet first.' Iliked Trimble the firsttime I met him, mainly because I realised he was a much better man than he seemed on the surface; I much prefer people like that to the charmers who turn out to be worse. I was at an academic conference in Keele with MY old friend the journalist-turned-Euro- crat Liam Hourican, when we decided to have a party to liven things up. It seemed Civil to invite the taciturn lawyer from Queen's University, Belfast. I didn't know 'Ulster Protestants well at that stage and I t_,I1Ought vaguely that he probably didn't urink and would leave early, but as I remember it he stayed till 3 a.m. We talked politics and never much else ?ver subsequent years at Anglo-Irish con- ferences. Then in 1990, shortly after he ueeatrie an MP, I took him to lunch at the Academy Club. 'Who runs it?' he asked. 'Auberon Waugh,' I said. 'You know, Eve- lyn's son.' He sighed. 'Since I became an MP I've had to cancel my subscription to the Literary Review. No time.' That was the first inkling I had that I was dealing with someone with an intellectual life outside academia and politics. As it turned out, he was passionately interested in music and was one of those people who can't see a bookshop without going in and spending more than they can afford. His tastes are eclectic: while politics and history domi- nate, he also reads fiction. I asked him once who was his favourite novelist. 'Trot- lope,' he said. 'I feel ashamed to admit it.' I was just getting indignant about this slur on a writer I love when he added, 'It's just that he's become so fashionable.'

One of the bizarre aspects of our friend- ship is that we have tended to meet either at Oxbridge, Westminster or in various fields full of solid Orangemen deeply sus- picious of anything outside their tradition and their patch. The culture from which Mr Trimble comes is anti-intellectual: he is the first leader of his party to have been to a university. Few of his colleagues would share his taste in holidays: he and Daphne and the four children disappear to Europe for a feast of art and music. When the political problems of Northern Ireland look particularly intransigent, Mr Trimble and his wife shrug, for should he become yet another Unionist leader unseated by an angry party, he will have a different life but one he would greatly enjoy.

That he is not fixated on staying in power is one of the reasons why Mr Trim- ble is such a risk-taker. Another is the adventurous streak that first emerged in his teens when he flew a glider in the Air Training Corps. But most important is that underneath that dour exterior is a passion- ate reformer who wants to lead Northern Ireland away from tribalism, paranoia and navel-gazing, and that he has enough brains and courage to have a chance of succeeding. If he fails, it will be because the British and Irish governments lacked the nerve to stand up to terrorists.