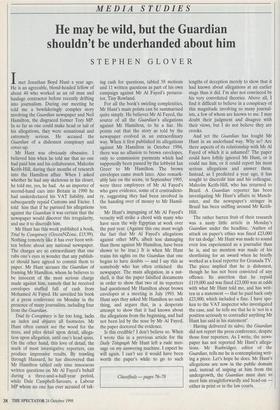 He may be wild, but the Guardian shouldn't be underhanded about him

Imet Jonathan Boyd Hunt a year ago. He is an agreeable, blond-headed fellow of about 40 who worked as an oil man and haulage contractor before recently drifting into journalism. During our meeting he told me a bewilderingly complex story involving the Guardian newspaper and Neil Hamilton, the disgraced former Tory MP. In so far as one could make head or tail of his allegations, they were sensational and extremely serious. He accused the Guardian of a dishonest conspiracy and cover-up.

Mr Hunt was obviously obsessive. I believed him when he told me that no one had paid him and his collaborator, Malcolm Keith-Hill, during their months of research into the Hamilton affair. When I asked whether he had any skeletons in his closet, he told me, yes, he had. As an importer of second-hand cars into Britain in 1990 he had underdeclared his VAT liability, and subsequently repaid Customs and Excise. I told him that if he pursued his allegations against the Guardian it was certain that the newspaper would discover this irregularity, and use it to discredit him.

Mr Hunt has this week published a book, Trial by Conspiracy (GreenNZone, £15.99). Nothing remotely like it has ever been writ- ten before about any national newspaper. The charges are so extraordinary that one rubs one's eyes in wonder that any publish- er should have agreed to commit them to paper. Mr Hunt accuses the Guardian of framing Mr Hamilton, whom he believes to be innocent of the most serious charge made against him, namely that he received envelopes stuffed full of cash from Mohamed Al Fayed. He unveiled his book at a press conference on Monday in the presence of many journalists, including four from the Guardian.

Trial by Conspiracy is far too long, lacks an index and abjures all footnotes. Mr Hunt often cannot see the wood for the trees, and piles detail upon detail, allega- tion upon allegation, until one's head spins. On the other hand, this love of detail, the mark of most investigative reporters, can produce impressive results. By trawling through Hansard, he has discovered that Mr Hamilton tabled only nine innocuous written questions on Mr Al Fayed's behalf during a three-and-a-half-year period, while Dale Campbell-Savours, a Labour MP whom no one has ever accused of tak- ing cash for questions, tabled 58 motions and 11 written questions as part of his own campaign against Mr Al Fayed's persecu- tor, Tiny Rowland.

For all the book's swirling complexities, Mr Hunt's main points can be summarised quite simply. He believes Mr Al Fayed, the source of all the Guardian's allegations against Mr Hamilton, to be a liar. He points out that the story as told by the newspaper evolved in an extraordinary way. When it first published its allegations against Mr Hamilton in October 1994, there was no allusion to brown envelopes, only to commission payments which had supposedly been passed by the lobbyist Ian Greer to Mr Hamilton. The brown envelopes came much later. Also remark- ably late on the scene, in September 1995, were three employees of Mr Al Fayed's who gave evidence, some of it contradicto- ry, suggesting they had been involved in the handing over of money to Mr Hamil- ton.

Mr Hunt's impugning of Mr Al Fayed's veracity will strike a chord with many who have seen the wily Egyptian at work over the past year. (Against this one must weigh the fact that Mr Al Fayed's allegations against other MPs, albeit less damaging than those against Mr Hamilton, have been shown to be true.) It is when Mr Hunt trains his sights on the Guardian that one begins to have doubts — and I say this as somebody who has often criticised the newspaper. The main allegation, in a nut- shell, is that the paper falsified documents in order to show that two of its reporters had questioned Mr Hamilton about brown envelopes at a meeting in July 1993. Mr Hunt says they asked Mr Hamilton no such thing, and argues that, in a desperate attempt to show that it had known about the allegations from the beginning, and had not been led by the nose by Mr Al Fayed, the paper doctored the evidence.

Is this credible? I don't believe so. When I wrote this in a previous article for the Daily Telegraph Mr Hunt left a rude mes- sage on my answering machine. I expect he will again. I can't see it would have been worth the paper's while to go to such lengths of deception merely to show that it had known about allegations at an earlier stage than it did. I'm also not convinced by his very convoluted theories. Above all, I find it difficult to believe in a conspiracy of this magnitude involving so many journal- ists, a few of whom are known to me. I may doubt their judgment and disagree with their views, but I do not believe they are crooks.

And yet the Guardian has fought Mr Hunt in an underhand way. Why so? Are there aspects of its relationship with Mr Al Fayed of which it is _ashamed? The paper could have loftily ignored Mr Hunt, or it could sue him, or it could report his most serious allegations and answer them. Instead, as I predicted a year ago, it has sought to discredit him and his colleague, Malcolm Keith-Hill, who has returned to Brazil. A Guardian reporter has been investigating Mr Hunt's affairs in Manch- ester, and the newspaper's stringer in Brazil has been sniffing around Mr Keith- Hill.

The rather barren fruit of their research was a nasty little article in Monday's Guardian under the headline, 'Author of attack on paper's ethics was fined £23,000 for tax dodge'. Mr Hunt was made to sound even less experienced as a journalist than he is, and no mention was made of his shortlisting for an award when he briefly worked as a local reporter for Granada TV. The piece implied that he is dishonest, though he has not been convicted of any offence. Its assertion that he repaid £119,000 and was fined £23,000 was at odds with what Mr Hunt told me, and has writ- ten in a statement — that he paid back only £23,000, which included a fine. I have spo- ken to the VAT inspector who investigated the case, and he tells me that he is 'not in a position seriously to contradict anything Mr Hunt has said in his statement'.

Having delivered its salvo, the Guardian did not report the press conference, despite those four reporters. As I write, the news- paper has not reported Mr Hunt's allega- tions. Mr Rusbridger, editor of the Guardian, tells me he is contemplating writ- ing a piece. Let's hope he does. Mr Hunt's allegations are now in the public domain and, instead of sniping at him from the undergrowth, the Guardian must dare to meet him straightforwardly and head-on — either in print or in the law courts.