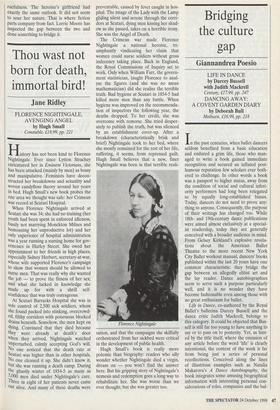 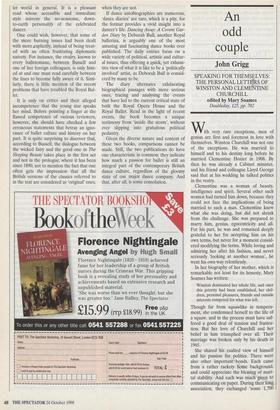 LIFE IN DANCE by Darcey Bussell with Judith Mackrell Century, £17.99, pp. 247 DANCING AWAY: A COVENT GARDEN DIARY by Deborah Bull Methuen, £16.99, pp. 218 In the past centuries, when ballet dancers seldom benefited from a basic education and endured a grim life, those who man- aged to write a book gained immediate recognition and secured an inflated post- humous reputation few scholars ever both- ered to challenge. In other words a book was a passport to higher status, away from the condition of social and cultural inferi- ority performers had long been relegated to by equally long-established biases. Today, dancers do not need to prove any- thing to anyone. Consequently, the purpose of their writings has changed too. While 18th- and 19th-century dance publications were aimed almost exclusively at a special- ist readership, today they are generally conceived with a broader audience in mind. From Gelsey Kirkland's explosive revela- tions about the American Ballet Theatre to the more recent New York City Ballet workout manual, dancers' books published within the last 20 years have one common characteristic: they bridge the gap between an allegedly elitist art and the lay reader. Dance autobiographies seem to serve such a purpose particularly well, and it is no wonder they have become fashionable even among those with no great enthusiasm for ballet.

Life in Dance, co-authored by the Royal Ballet's ballerina Darcey Bussell and the dance critic Judith Mackrell, belongs to this category. It could be objected that Bus- sell is still far too young to have anything to say or to pass on to posterity. Yet, as hint- ed by the title itself, where the omission of any article before the word 'life' is clearly intentional, the content of the work is far from being just a series of personal recollections. Conceived along the lines of illustrious examples such as Natalia Makarova's A Dance Autobiography, the book integrates some amusing biographical information with interesting personal con- siderations of roles, companies and the bal- let world in general. It is a pleasant read whose accessible and immediate style mirrors the no-nonsense, down- to-earth personality of the celebrated dancer.

One could wish, however, that some of the more burning issues had been dealt with more .explicitly, instead of being treat- ed with an often frustrating diplomatic naivety. For instance, the rivalry, known to every balletomane, between Bussell and one of her foreign colleagues, is only hint- ed at and one must read carefully between the lines to become fully aware of it. Simi- larly, there is little mention of the recent problems that have troubled the Royal Bal- let.

It is only on critics and their alleged incompetence that the young star speaks her mind. Before pointing a finger at the flawed competence of various reviewers, however, she should have checked a few erroneous statements that betray an igno- rance of ballet culture and history on her part. It is quite surprising to discover that, according to Bussell, the dialogue between the wicked fairy and the good one in The Sleeping Beauty takes place in the first act and not in the prologue, where it has been since 1890, not to mention the fact that one often gets the impression that all the British versions of the classics referred to in the text are considered as 'original' ones, when they are not.

If dance autobiographies are numerous, 'dance diaries' are rare, which is a pity, for the format provides a vivid insight into a dancer's life. Dancing Away: A Covent Gar- den Diary by Deborah Bull, another Royal ballerina, is arguably one of the most amusing and fascinating dance books ever published. The daily entries focus on a wide variety of political, artistic and cultur- al issues, thus offering a quick, yet exhaus- tive view of what it is like to be a 'politically involved' artist, as Deborah Bull is consid- ered by many to be.

The diary alternates exhilarating biographical passages with more serious ones, tracing and analysing the events that have led to the current critical state of both the Royal Opera House and the Royal Ballet. Read in the light of recent events, the book becomes a unique testimony from 'inside the storm', without ever slipping into gratuitous political pedantry.

Given the diverse nature and content of these two books, comparisons cannot be made. Still, the two publications do have one characteristic in common: they indicate how much a passion for ballet is still an integral part of the contemporary British dance culture, regardless of the gloomy state of our major dance company. And that, after all, is some consolation.