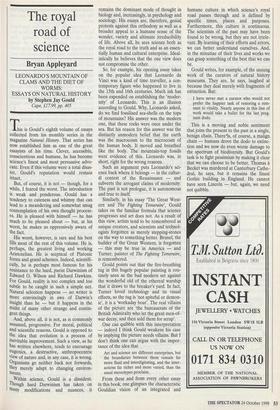 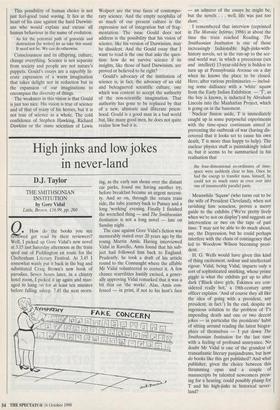 The royal road of science

LEONARDO'S MOUNTAIN OF CLAMS AND THE DIET OF WORMS: ESSAYS ON NATURAL HISTORY by Stephen Jay Gould Cape, £17.99, pp. 405 his is Gould's eighth volume of essays collected from his monthly series in the magazine Natural History. That series has now established him as one of the great essayists of his time. Clever, accessible, conscientious and humane, he has become science's finest and most persuasive advo- cate. Even if this volume were a total disas- ter, Gould's reputation would remain intact.

But, of course, it is not — though, for a While, I feared the worst. The introduction is weak and ponderous. Gould has a tendency to cuteness and whimsy that can lead to a meandering and somewhat smug contemplation of his own thought process- es. He is pleased with himself — he has much to be pleased about — but, at his worst, he makes us oppressively aware of the fact.

His worst, however, is rare and his best fills most of the rest of this volume. He is, Perhaps, the greatest living and working Aristotelian. He is sceptical of Platonic forms and grand schemes. Indeed, scientifi- cally, he is perhaps most famous for his resistance to the hard, purist Darwinism of Edward 0. Wilson and Richard Dawkins. For Gould, reality is too complex and too subtle to be caught in such a simple net. Natural selection happens — no writer is More convincingly in awe of Darwin's insight than he — but it happens in the midst of many other strange and contin- gent things.

And, above all, it is not, as is commonly assumed, progressive. For moral, political and scientific reasons, Gould is opposed to the idea that evolution is a process of inevitable improvement. Such a view, as he has written elsewhere, tends to encourage eugenics, a destructive, anthropocentric view of nature and, in any case, it is wrong. Organisms go neither back nor forwards, they merely adapt to changing environ- ments.

Within science, Gould is a dissident. Though hard Darwinism has taken on many modifications and nuances, it remains the dominant mode of thought in biology and, increasingly, in psychology and sociology. His essays are, therefore, genial protests against this orthodoxy as well as a broader appeal to a humane sense of the wonder, variety and ultimate irreducibility of life. Above all, he sees science both as the royal road to the truth and as an essen- tially human and cultural enterprise. Ideal- istically he believes that the one view does not compromise the other.

So, for example, his opening essay takes on the popular idea that Leonardo da Vinci was a kind of time traveller, a con- temporary figure who happened to live in the 15th and 16th centuries. Much ink has been expended on establishing the `moder- nity' of Leonardo. This is an illusion according to Gould. Why, Leonardo asked, do we find fossilised sea-shells on the tops of mountains? His answer was the modern one, that these rocks were once under the sea. But his reason for this answer was the distinctly unmodern belief that the earth was the macrocosm to the microcosm of the human body. It moved and breathed like the body. The mountain-top fossils were evidence of this. Leonardo was, in short, right for the wrong reasons.

Such an argument puts Leonardo's sci- ence back where it belongs — in the cultur- al context of the Renaissance — and subverts the arrogant claims of modernity. The past is not prologue, it is autonomous and true to itself.

Similarly, in his essay 'The Great West- ern and The Fighting Temeraire', Gould takes on the familiar formula that science progresses and art does not. As a result of this view, artists tend to be remembered as unique creators, and scientists and technol- ogists forgotten as merely stepping-stones on the way to something better. Brunel, the builder of the Great Western, is forgotten — this may be true in America — and Turner, painter of The Fighting Temeraire, is remembered.

Gould points out that the fire-breathing tug in this hugely popular painting is rou- tinely seen as the bad modern set against the wonderful old of the ethereal warship that it draws to the breaker's yard. In fact, Turner loved technology and its visual effects, so the tug is 'not spiteful or demon- ic', it is a 'workaday boat'. The real villains of the picture are 'the bureaucrats of the British Admiralty who let the great men-of- war decay, and then sold them for scrap'.

One can quibble with this interpretation — indeed I think Gould weakens his case by implying the picture needs villains. But I don't think one can argue with the impor- tance of the idea that

Art and science are different enterprises, but the boundaries between them remain far more fluid and interdigitating, and the inter- actions far richer and more varied, than the usual stereotypes proclaim.

From these and from every other essay in this book, one glimpses the characteristic Gouldian vision of an integrated and humane culture in which science's royal road passes through and is defined by specific times, places and purposes. Furthermore, this culture is continuous. The scientists of the past may have been found to be wrong, but they are not irrele- vant. By learning of their efforts and errors, we can better understand ourselves. And, in the minutiae of their lives and works we can grasp something of the best that we can be.

Gould writes, for example, of the unsung work of the curators of natural history museums. They are, he says, laughed at because they deal merely with fragments of extinction. But: I have never met a curator who would not prefer the happier task of restoring a rem- nant to vitality. Nearly anyone in this line of work would take a bullet for the last preg- nant dodo.

This is a moving and noble sentiment that joins the present to the past in a single, benign chain. There 'is, of course, a malign chain — humans drove the dodo to extinc- tion and we now do even worse damage to the spectrum of biodiversity. But Gould's task is to fight pessimism by making it clear that we can choose to be better. Thomas a Becket was murdered at Canterbury Cathe- dral, he says, but it remains the finest Gothic building in England. He cannot have seen Lincoln — but, again, we need not quibble. This possibility of human choice is not just feel-good hand waving. It lies at the heart of his case against the hard Darwini- ans who would explain and excuse all human behaviour in the name of evolution.

As for the potential path of genocide and destruction [he writes] let us take this stand.

It need not be. We can do otherwise.

Consciousness and its offspring, culture, change everything. Science is not separate from society and people are not nature's puppets. Gould's essays are a superbly lit- erate expression of a warm imagination that takes delight not in reduction but in the expansion of our imaginations to encompass the diversity of things.

The weakness in this vision is that Gould is just too nice. His vision is true of science and of that of many of his heroes, but it is not true of science as a whole. The cold confidence of Stephen Hawking, Richard Dawkins or the inane scientism of Lewis Wolpert are the true faces of contempo- rary science. And the empty neophilia of so much of our present culture is the expression not of integration but of frag- mentation. The issue Gould does not address is the possibility that his vision of science, like his version of Darwinism, may be dissident. And the Gould essay that I want to read is the one that asks the ques- tion: how do we survive science if its insights, like those of hard Darwinism, are proved or believed to be right?

Gould's advocacy of the institution of science is, in fact, the advocacy of an old and beleaguered scientific culture, one which was content to accept the authority of the non-scientific imagination. That authority has gone to be replaced by that of a new, ahistoric and illiterate priest- hood. Gould is a good man in a bad world but, like many good men, he does not quite realise how had it is.