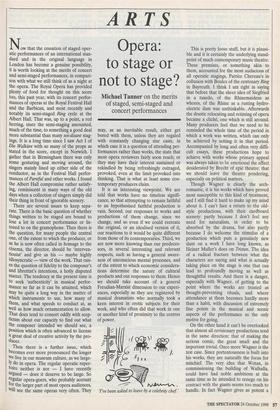 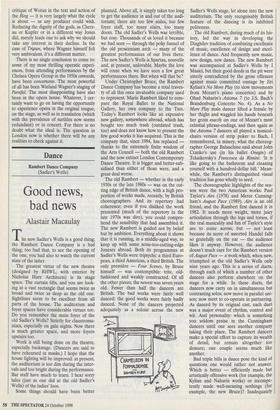 Opera: to stage or not to stage?

Michael Tanner on the merits of staged, semi-staged and concert performances Now that the cessation of staged oper- atic performances of an international stan- dard and in the original language in London has become a genuine possibility, it is worth looking at the merits of concert and semi-staged performances, in compari- son with what we still think of as a night at the opera. The Royal Opera has provided plenty of food for thought on this score too, this past year, with its concert perfor- mances of operas at the Royal Festival Hall and the Barbican, and most recently and notably its semi-staged Ring cycle at the Albert Hall. That was, up to a point, a red herring, since the semi-staging amounted, much of the time, to something a good deal more substantial than many soi-disant stag- ings. It is a long time since I saw Act I of Die Walkiire with so many of the props as stated in the score, except in Norwich. I gather that in Birmingham there was only some gesturing and moving around, the singers mainly lined up either side of the conductor, as in the Festival Hall perfor- mances of Parsifal and other works. I found the Albert Hall compromise rather satisfy- ing, reminiscent in many ways of the old days when a collection of singers simply did their thing in front of ignorable scenery.

There are several issues to keep sepa- rate. There is the basic question of whether things written to be staged are bound to lose a lot in concert performance or lis- tened to on the gramophone. Then there is the question, for many people the central one, of the extent to which the producer, or as he is now often called in homage to the cinema, the director, should be 'interven- tionist' and give us his — maybe highly idiosyncratic — view of the work. That rais- es the question of fidelity to the composer's and librettist's intentions, a hotly disputed matter. The tendency at the present time is to seek 'authenticity' in musical perfor- mance so far as it can be attained, which may be quite a long way in the matter of Which instruments to use, how many of them, and what speeds to conduct at, as well as how much ornamentation to allow. That does tend to consort oddly with scep- ticism about our capacity to find out what the composer intended we should see, a Position which is often advanced to license a great deal of creative activity by the pro- ducer.

Then there is a further issue, which becomes ever more pronounced the longer we live in our museum culture, as we large- ly do in opera. The regular operatic reper- toire neither is nor — I have recently argued — does it deserve to be large. So regular opera-goers, who probably account for the larger part of most opera audiences, Will see the same operas very often. They may, as an inevitable result, either get bored with them, unless they are regaled with constantly changing star casts, in which case it is a question of attending per- formances rather than works, the state that most opera reviewers fairly soon reach; or they may have their interest sustained or rekindled by being refreshingly outraged, provoked, even at the limit provoked into thinking. That is what at least some con- temporary producers claim.

It is an interesting viewpoint. We are told that works have no timeless signifi- cance, so that attempting to remain faithful to an hypothesised faithful production is vain. Second, our responses to works and productions of them change, since we change, and so even if we could recreate the original, or an idealised version of it, our reactions to it would be quite different from those of its contemporaries. Third, we are now more knowing than our predeces- sors, in several interesting and relevant respects, such as having a general aware- ness of unconscious mental processes, and of the extent to which economic considera- tions determine the nature of cultural products and our responses to them. Hence we should take account of a general Freudian-Marxist dimension to our experi- ences, especially as they are registered by musical dramatists who normally took a keen interest in erotic subjects for their work, and who often did that work in one or another kind of proximity to the centres of power.

-------='- Tve been asked to leave by a celebrity chef' This is pretty loose stuff, but it is plausi- ble and it is certainly the underlying stand- point of much contemporary music theatre. These premises, or something akin to them, accounted for the most audacious of all operatic stagings, Patrice Chereau's in collusion with Boulez of the centenary Ring in Bayreuth. I think I am right in saying that before that the sheer idea of Siegfried in a tuxedo, of the Rhinemaidens as whores, of the Rhine as a rusting hydro- electric dam was unthinkable. Afterwards the drastic relocating and retiming of opera became a cliché, one which is still around. Many producers feel that we need to be reminded the whole time of the period in which a work was written, which can only be achieved by setting it in that period. Accompanied by long and often very diffi- cult essays, these productions hope to achieve with works whose primary appeal was always taken to be emotional the effect desiderated by Brecht of epic theatre: that we should leave the theatre pondering, especially on political matters.

Though Wagner is clearly the arch- romantic, it is his works which have proved most susceptible to this kind of treatment, and I still find it hard to make up my mind about it. I can't face a return to the old- style productions, with their cardboard scenery: partly because I don't feel any need for naturalism, in order to be absorbed by the drama, but also partly because I do welcome the stimulus of a production which puts a genuinely new slant on a work I have long known, as Heiner Muller's does on Tristan. The idea of a radical fracture between what the characters are saying and what is actually taking place on the stage is one that can lead to profoundly moving as well as thoughtful results. And there is a danger, especially with Wagner, of getting to the point where the works are treated as thought-preventing rituals, and where attendance at them becomes hardly more than a habit, with discussion of extremely fine points in the musical and scenic aspects of the performance as the only motive for going.

On the other hand it can't be overlooked that almost all revisionary productions tend in the same direction: that of making the serious comic, the great small and the important trivial. Once more Wagner is the test case. Since portentousness is built into his works, they are naturally the focus for mischief. The very idea that Wotan, in commissioning the building of Walhalla, could have had noble ambitions at the same time as he intended to renege on his contract with the giants seems too much to handle. In fact Wagner gives as potent a critique of Wotan in the text and action of the Ring — it is very largely what the cycle is about — as any producer could wish. Reducing the dignity of the gods, as Chere- au or Kupfer or in a different way Jones did, merely leads one to ask why we should take any interest in their decline. In the case of Tristan, where Wagner himself felt very ambivalent, it's a different matter.

There is no single conclusion to come to: some of my most thrilling operatic experi- ences, from attending performances by the Chelsea Opera Group in the 1950s onwards, have been concertante. The most powerful of all has been Wieland Wagner's staging of Parsifal. The most disappointing have also been in the opera house. Whatever, I cer- tainly want to go on having the opportunity to experience opera in the original tongue, on the stage, as well as in translation (which with the prevalence of surtitles now seems redundant) or in concert. For there is no doubt what the ideal is. The question in London now is whether there will be any realities to check against it.