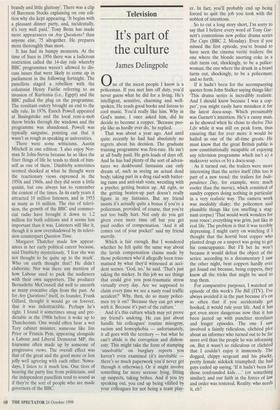 It's part of the culture

0 ne of the nicest people I know is a policeman. If you met him off duty, you'd never guess what he did for a living. He's intelligent, sensitive, charming and well- spoken. He reads good books and listens to cool music. You'd really like him. Why in God's name, I once asked him, did he decide to become a copper. 'Because peo- ple like us hardly ever do,' he replied.

That was about a year ago. And until quite recently he had had absolutely no regrets about his decision. The graduate training programme was first-rate. He isn't at all badly paid. He gets loads of days off. And he has had plenty of the sort of adven- tures we deskbound fantasists can only dream of, such as seeing an actual dead body; taking part in a drug raid with batter- ing rams and anti-stab vests; wrestling with a psycho; getting beaten up. All right, so the getting beaten-up part doesn't really figure in my fantasies. But my friend insists it's actually quite a bonus if you're a policeman, provided, of course, that you're not too badly hurt. Not only do you get given even more time off but you get paid oodles of compensation. 'And it all comes out of your pocket!' said my friend merrily.

Which is fair enough. But I wondered whether he felt quite the same way about the lavish compensation claims made by those policemen who'd allegedly been trau- matised by what they'd witnessed at acci- dent scenes. 'God, no,' he said. 'That's just taking the mickey. In this job we see things that could give you post-traumatic stress virtually every day. Are we supposed to claim every time we see a nasty road traffic accident?' Why, then, do so many police- men try it on? 'Because they can get away with it. Because it's part of the culture.'

And it's this culture which may yet prove my friend's undoing. He can just about handle his colleagues' routine misogyny, racism and homophobia — unfortunately, it all goes with the territory — but what he can't abide is the corruption and dishon- esty. This might take the form of stamping 'unsolvable' on burglary reports you haven't even examined (it's inevitable — there's so much paperwork you'd never get through it otherwise). Or it might involve something far more serious: lying, fitting up suspects, taking bribes. And if you try speaking out, you end up being vilified by your colleagues for not being a team play- er. In fact, you'll probably end up being forced to quit the job you took with the noblest of intentions.

So to cut a long story short, I'm sorry to say that I believe every word of Tony Gar- nett's contentious new police drama series The Cops (BBC 2, Monday). Even if you missed the first episode, you're bound to have seen the cinema verite trailers: the one where the blonde snorting coke in a club turns out, shockingly, to be a police- woman; the one where the drunk in a brawl turns out, shockingly, to be a policeman; and so forth.

If it hadn't been for the accompanying quotes from John Stalker saying things like: 'This drama series is incredibly realistic. And I should know because I was a cop- per', you might easily have mistaken it for the latest docu-soap. Which presumably was Gametes intention. He's a canny man, as he showed when he chose to shelve This Life while it was still on peak form, thus ensuring that for ever more it would be hailed as one of the all-time greats. He must know that the great British public is now constitutionally incapable of enjoying any television programme which isn't a) a makeover series or b) a docu-soap.

As it turned out, the trailers were more interesting than the series itself (this too is part of a new trend: the trailers for Inde- pendence Day, for example, were much cooler than the movie), which consisted of sundry coppers doing nothing in particular in a very realistic way. The camera work was modishly shaky; the policemen said plausible things like (on smelling a stag- nant corpse) 'That would work wonders for your roses'; everything was grim, just like in real life. The problem is that it was terribly depressing. I might carry on watching if I thought that the horrid bent copper who planted drugs on a suspect was going to get his comeuppance. But I'll bet he won't because it would defeat the object of the series: according to a documentary I saw the other night, bent coppers hardly ever get found out because, being coppers, they know all the tricks that might be used to trap them.

For comparative purposes, I watched an episode of this week's The Bill (ITV). I've always avoided it in the past because it's on so often that if you accidentally got hooked, it would rule your life. And it has got even more dangerous now that it has been jazzed up with punchier storylines and longer episodes. The one I saw involved a faintly ridiculous, clicheed plot about an informer who turned out to be far more evil than the people he was informing on. But it wasn't so ridiculous or clicheed that I couldn't enjoy it immensely. The dogged, chippy sergeant and his plucky, pretty female sidekick triumphed; the bad guys ended up saying, 'If it hadn't been for those confounded kids ...' (or something similar); and our faith in the forces of law and order was restored. Reality: who needs it, eh?