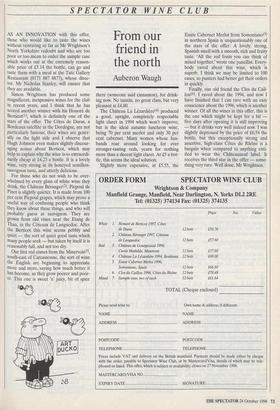 From our friend in the north

AS AN INNOVATION with this offer, those who would like to taste the wines without venturing so far as Mr Wrightson's North Yorkshire redoubt and who are too poor or too mean to order the sample case which works out at the extremely reason- able price of £5.14 the bottle, can go and taste them with a meal at the Tate Gallery Restaurant (0171 887 8877), whose direc- tor, Mr Nicholas Stanley, will ensure that they are available.

Simon Wrightson has produced some magnificent, inexpensive wines for the club in recent years, and I think that he has scored another winner with his Honore de Berticot(1), which is definitely one of the stars of the offer. The Cotes de Duras, a Bordeaux satellite in the Dordogne, are not Particularly famous; their wines are gener- ally on the light side and I observe that Hugh Johnson even makes slightly discour- aging noises about Berticot, which may help to explain why the wine is.so extraordi- narily cheap at £4.23 a bottle. It is a lovely wine, very strong in its honeyed semillon- sauvignon taste, and utterly delicious.

For those who do not wish to be over- whelmed by every glass of white wine they drink, the Château Beranger(2), Picpoul de Pinet is slightly quieter. It is made from 100 Per cent Picpoul grapes, which may prove a useful way of confusing people who think they know about these things, and who will Probably guess at sauvignon. They are grown from old vines near the Etang de Thau, in the °Meaux de Languedoc. After the Berticot this wine seems pebbly and quiet — the sort of quiet good taste which many people seek — but taken by itself it is reasonably full, and not too dry.

Our first red comes from the Minervois(3), south-east of Carcassonne, the sort of wine the English are beginning to appreciate more and more, saying how much better it has become, as they grow poorer and poor- er. This one is sweet 'n' juicy, bit of spice there (someone said cinnamon), for drink- ing now. No tannin, no great class, but very pleasant at £4.80.

The Château La Lezardilre(4) produced a good, upright, completely respectable light claret in 1994 which won't improve, but is the ideal autumn luncheon wine, being 70 per cent merlot and only 30 per cent cabernet. Many women whose hus- bands roar around looking for ever stronger-tasting reds, yearn for nothing more than a decent light claret. At £5 a bot- tle, this seems the ideal solution.

Slightly more expensive, at £5.55, the Enate Cabernet Merlot from Somontano(5) in northern Spain is unquestionably one of the stars of the offer. A lovely, strong, Spanish smell with a smooth, rich and fruity taste. 'All the red fruits you can think of mixed together,' wrote one panellist. Every- body raved about this wine, which is superb. I think we may be limited to 100 cases, so punters had better get their orders in quickly.

Finally, our old friend the Clos du Cail- lou(6). I raved about the 1994, and now I have finished that I can rave with an easy conscience about the 1996, which is another winner. Of all the wines in this offer, this is the one which might be kept for a bit — five days after opening it is still improving — but it drinks very well indeed now. I was slightly depressed by the price of £6.54 the bottle, but this exceptionally strong and assertive, high-class Cotes du Rhone is a bargain when compared to anything enti- tled to wear the Chateauneuf label. It receives the third star in the offer — some- thing very rare. Well done, Mr Wrightson.