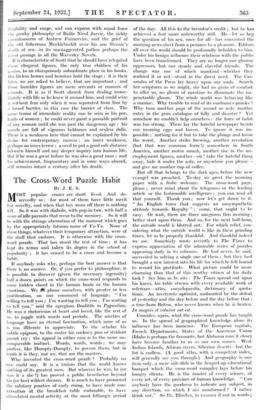 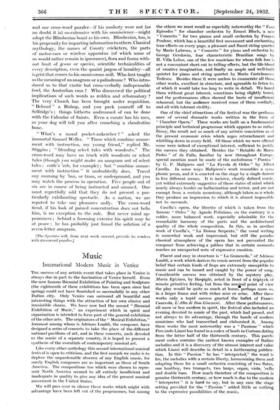 MOST popular crazes are short lived. And de- servedly so : for most of them have little merit but novelty, and when that has worn off there is nothing- left. So it was with diabolo, with pop-in-taw, with half a score of' idle pursuits that recur to the memory. So it will be with the strange aberration of the moment which goes by the appropriately fatuous name of Yo-Yo. None of these things, whatever their temporary attraction, were of the stuff that endures. It is otherwise with the cross- word puzzle. That has stood the test of time ; it has kept its terms and taken its degree in the school of popularity -; it has ceased to be a craze and become a habit.

• If anybody asks why, perhaps the best answer is that' there is no answer. Or, if you prefer to philosophize, it is possible to discover (given the necessary ingenuity) half a dozen points on which the cross-word responds to some hidden chord in the human brain or the human emotions. We Al plume ourselves, with greater or less justification, on our command of language. " I'm willing to tell you ; I'm wanting to tell you ; I'm waiting to tell you," said the egregious. Doolittle. in Pygmalion.; He was a rhetorician at heart and loved, like the rest of. us,. to juggle with words and periods. The niceties of language have an eternal fascination, which none of us is too- illiterate to appreciate. To the scholar his subtle epigram, to the coster his cockney pun or strident parrot cry ; the appeal in either case is to the same un- conquerable instinct. Words, words, words ; we may profess, like Humpty-Dumpty, to govern them, but in truth it is they, not we, that are the masters.

Who invented the cross-word puzzle ? Probably no one could say. It is a truism that the world knows nothing of its greatest men. .But whoever he was, he (or was it a she ?) has proved a public benefactor beyond his (or her) wildest dreams. It is much to have.promoted the salutary practice of early rising, to have made con-. versation . at the breakfast table endurable, to have stimulated mental activity at the most lethargic period- of the day. All this to- the inventor's credit ; but he has achieved a feat more noteworthy still. He—let us beg the question of his sex, once for all—has converted the morning news-sheet from a penance to a pleasure. Editors all over the world should be profoundly beholden to him.

Under his benign influence their relations with the public have been transformed. They are no longer our gloomy oppressors, but our steady and cheerful friends. The change was one of which mankind—whether they realized it or not—stood in the direst need. The Cas- sandra of the Press lay heavy upon our souls. Search her scriptures as we might, she had no grain of comfort to offer us, no gleam of sunshine to illuminate the im- penetrable gloom. The whole world was behaving like a maniac. Why trouble to read of its madman's pranks ?

Why turn another page of the record or note another entry in the grim catalogue of folly and disaster ? Yet somehow we couldn't help ourselves : the force of habit was too strong. There lay the hateful newspaper beside our morning eggs and bacon. To ignore it was im- possible ; nothing for it but to take the plunge and know the worst. Another strike brewing, another revolution (but that was common form !) somewhere in South America, another motor smash, another rise in • the un- employment figures, another—oh ! take the hateful thing away, hide it under the sofa, or anywhere you please — and give me another cup of coffee. • But all that belongs to the dark ages, before the new evangel was preached. To-day we greet the morning paper with a frolic welcome. The cross-word page, please ; never mind about the telegrams or the leading. article or the fashionable intelligence : you can read all that yourself. Thank you ; now let's get down to it. " An English town that suggests an unsympathetic attitude towards Royalty " : • come, that ought to be easy. Or wait, there are three anagrams this morning ; better start upon them. And so, for the next half-hour, the outside world is blotted out. For which relief, con- sidering what the outside world is like iu these grinding times, let us be properly thankful. And thankful indeed ive are. Somebody wrote recently. to The Times to express appreciation of the admirable series of puzzles appearing daily in its columns. lie had never, he said, succeeded in solving a single one of them ; but they bad brought a new interest into his life for which he felt bound to record his gratitude. What picture could be more charming than that of this worthy citizen at his daily. task ? See him as he sits : The Times spread out upon his knees, his table strewn with every available work of reference—atlas, encyclopaedia, dictionary of quota- tions. An inveterate optimist, undaunted by the defeat of yesterday and the day before and the day before that ; a true-born Briton, who never knows when he is beaten. In mognis et voluisse sat est.

Consider, again, what the cross-word puzzle has taught us. In the spread of geographical knowledge alone its influence has been immense. The European capitals, French Departments, States of. the American Union. (Idaho is perhaps the favourite, but Alabama runs it close) have become familiar to us as our own names. West Indian Islands, African rivers, Siberian deserts—but the list is endless. (A good atlas, with a competent index, will generally see you through.) And geography is one item only, a mere side-dish in the heaped-up educational banquet which the cross-word compiler lays before his hungry clients. He is the master of every science, of every art, of every province of human knowledge. " Can anybody have the goodness to indicate any subject, in- any direction, on which I am uninformed ? I rather think not," So Dr. Blimbcr, in manner if not in words; and our cross-word puzzler—if his modesty were not (as no doubt it is) co-extensive with his omniscience—might adopt the Blimberian boast as his own. Blimberian, too, is his propensity for imparting information to others. Classical mythology, the names of County cricketers, the parts of motor-cars or wireless apparatus (of which some of us would rather remain in ignorance), flora and fauna with- out limit of genus or species, scientific technicalities of every description, even the quaint jargon of heraldry—all is grist that comes to his omnivorous mill. • Who first taught us the meaning of an anagram or a palindrome ? Who intro- duced us to that exotic but cross-verbally indispensable fowl, the Australian emu ? Who discovered the political implications of such words as redden and reformatory ? The very Church has been brought under requisition. " Behead " a Bishop, and you pack yourself off to Selfridge's ; things hitherto undreamed of can be done with the Calendar of Saints. Even a curate has his uses, as your dog will tell you after crunching a clandestine bone.

" What's a moral pocket-ankercher ? " asked the immortal Samuel Weller. " Those which combine amuse- ment with instruction, my young friend," replied Mr. Stiggins ; " blending select tales with woodcuts." The cross-word may have no truck with woodcuts or select tales (though you might make an anagram out of select tales : cattle's 'eels, for example) ; but " combine amuse- ment with instruction " it undoubtedly does. Travel any morning by 'bus, or tram, or underground, and you may watch the process in operation. Five people out of six are in course of being instructed and amused. One must regretfully add that they do not present a par- ticularly exhilarating spectacle. As a nation, we are reputed to take our pleasures sadly. The cross-word fiend, if his look of pained concentration does not belie him, is no exception to the rule. But never mind ap- pearances ; behind- a. frowning exterior his spirit may be at peace : he has probably just found the solution of a seven-letter anagram.

[The Spectator will, from next week onward, provide its readers with crossword puzzles.]