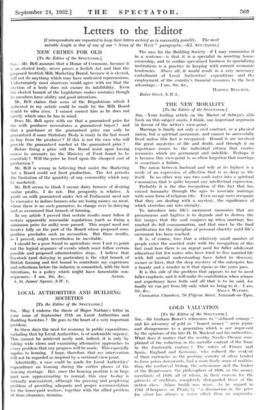 THE NEW MORALITY [To the Editor of the SPECTATOR.] SIR,—Your

leading article on the Master of Selwyn's able book on this subject omits, I think, one important argument in favour of the writer's view-point.

Marriage is finally not only a civil contract, or a physical union, but a spiritual sacrament, and cannot be successfully lived unless this fact is recognized. Round it are involved the great mysteries of life and death, and through it an experience comes to the individual citizen that creates memories which arc permanent and indelible. Perhaps it is because this view-point is so often forgotten that marriage is sometimes a failure.

The union between husband and wife at its highest is a mode of an expression of affection that is as deep as life itself. In no other way can two souls enter into a spiritual communion that is quite beyond any intellectual expression.

Probably it is the dim recognition of this fact that has caused humanity through the ages to associate marriage with some form of religious rite. Even savage races recognize that they are dealing with a mystery, the significance of which stretches out into eternity.

To introduce into life's sacrament memories that are promiscuous and fugitive is to degrade and to destroy the fair images that the soul conjures up when marriage has reached its full consummation, and that must be the final justification for the discipline of personal chastity until life's sacrament has been reached.

It is, of course, true that a relatively small number of people enter the married state with the recognition of this fact (and here there is an urgent need for fuller adolescent education) but few mates who have tried to live married life with full mutual understanding have failed to discover, sooner or later, that the deep mystery of the enterprise has a beauty and a wonder in it that ripens as the years pass.

It is this side of the problem that appears to me to need fuller emphasis, and it will make its contribution when science and expediency have both said all that is to be said, for finally we can get from life only what we bring to it.—I am,