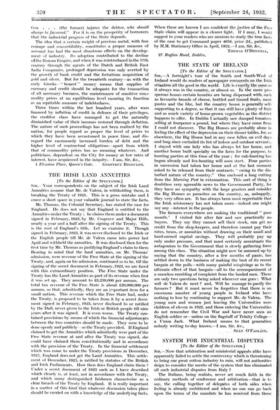 THE STATE OF IRELAND

[To the Editor of the Sencr_vroa.1 SIR,—A fortnight's tour of the South and South-West of Ireland would do readers of newspaper cornmentaon the Irish situation all the good in the world. Life is eNaetly, the same as it always was in the country, or alinost so. In the more pro- sperous homes certain luxuries are being dispensed with, such as favourite brands of cheese, bottled and tinned fruits, meat pastes and the like, but the country house is generally self- supporting to a degree, so that it can still have plenty of fruit 'and as much variety of home-grown vegetables as the district happens to offer. In Dublin I actually saw dumped tomatoes selling at fourpence a pound, but where they-have come from I could not discover. The Big Houses are probably alone in feeling the effect of the depression on their dinner tables, for, as elsewhere, the Big House had in any case fallen on evil days and long since curtailed its list of indoor and outdoor servants. I stayed with one lady who has always let her house, and another house built specially on the farm for the purpose, to hunting parties at this time of the year ; for cub-hunting has begun already and fox-hunting will soon start. Four parties in succession had taken her house and at the last moment asked to be released from their contracts owing to the dis- turbed nature of the country." One enclosed a long cutting from the Morning Post in extenuation; This sort of thing is doubtless very agreeable news to the Government Party, for they have no sympathy with the large graziers and consider the Big Houses as parasites on the country, as, unhappily, they very often are. It has always been most regrettable that the Irish aristocracy has not taken more—indeed one might say any—interest in the people.

The farmers everywhere are making the traditional " poor mouth." I visited fair after fair and saw practically no buyers. They say they cannot sell their stock, can get no credit from the shop-keepers, and therefore cannot pay their rates, taxes, or annuities without drawing on their small and hard-earned capital savings. They will probably pay up only under pressure, and that must certainly accentuate the antagonism to the Government that is slowly gathering force among this class. The situation might now be summed up by saying that the country, after a few months of panic, has settled down to the business of making the best of its recent bargain at the polls—with many painful misgivings as to the ultimate effect of that bargain—all to the accompaniment of a ceaseless rumbling of Complaint from the landed then. There are only two questions being asked wherever one goes : What will de Valera do next ? and, Will he manage to pacify the farmers ? But it must never be forgotten that there is an enormous number of young people in Ireland who have nothing to lose by continuing to support Mr. de Valera. The young men and women just leaving .the Universities were children of eleven in 1922, and those entering the Universities do not remember the Civil War and have never seen an English soldier or—unless on the flagstaff of Trinity College—. a Union Jack. What Ireland means to that generation nobody writing to-day knows.—I am, Sir, &c.,