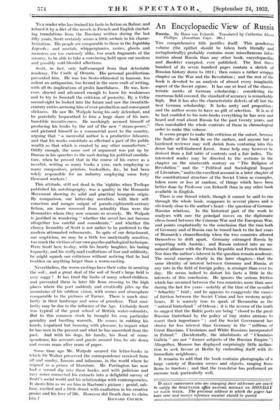 An Encyclopaedic View of Russia

Russia. By Hans von Eckardt. Translated by Catherine Alison Phillips. (Jonathan Cape. 36s.) THE comprehensive title justifies itself. This ponderous volume (the epithet should be taken both literally and metaphorically) probably contains more miscellaneous infor- mation about Russia than any other book, encyclopaedias and Baedeker excepted, ever published. The first three -hundred of its seven hundred• pages contain a sketch• of Russian history down to 1914 ; then comes a rather scrappy chapter on the War and the Revolution ; and the rest of the book is devoted to an analysis of almost every imaginable aspect of the Soviet regime. It has one at least of the charac- teristic merits of German scholarship : considering the enormous field covered, the standard of accuracy is remarkably high. But it has -also the characteristic defects of all but the best German scholarship. It lacks unity and proportion ; and the author seems to have no gift of selection. It is as if he had confided to his note-books everything he has seen and heard and read about Russia for the past twenty years, and then marshalled the whole contents of them in chronological order to make this volume.

It seems proper to make this criticism at the outset, because the faults of the book lie on the surface, and anyone but a hardened reviewer may well shrink from venturing into this dense but well-timbered forest. Some help may however be derived from a full table of contents and a fair index. The interested reader may be directed to the sections in the chapter on the nineteenth century on " The Religion of Revolution " and the " Political and Sociological Import of Literature," and to the excellent account in a later chapter of the constitutional structure of the Soviet Union as examples, taken more or less at random, of things which have been better done by Professor von Eckardt than in any other book available in English.

There is one thread which, though it cannot be said to run through the whole book, reappears in several places and is obviously close to the author's heart—the question of German- Russian relations. In the historical part of the work he analyses with care the principal moves on the diplomatic chess-board between the Crimean War and the European War, and points emphatically to the conclusion that the ruin both of Germany and of Russia can be traced back to the last years of Bismarck's chancellorship when the two countries allowed themselves to drift apart. Germany estranged Russia by coquetting with Austria ; and Russia entered into an un- natural alliance with the French Republic and French finance. Nor does the author's interest in the question remain academic. The moral emerges clearly in the later chapters—that the same identity of interest between Germany and Russia, at any rate in the field of foreign policy, is stronger than ever to- day. He seems indeed to distort his facts a little in the interests of this conclusion. He ignores the serious .friction which has occurred between the two countries more than once during the last few years—notably at the time of the so-called " Schachty " trial ; and he appears to exaggerate the causes of friction between the Soviet Union and her western neigh- bours. It is scarcely true to speak of Bessarabia as the " natural hinterland " of Odessa ; it is the reverse of the truth to suggest that the Baltic ports are being " closed to the great Russian hinterland by the policy of tiny states anxious to assert their importance " ; and the Soviet Government has shown far less interest than Germany in the " millions of Great Russians, Ukrainians and White Russians incorporated in Poland." (Incidentally, the inhabitants of " Ukrainian Galicia " are not " former subjects of the Russian Empire.") Altogether, Moscow has displayed surprisingly little inclina- tion to seek favour at Berlin by embroiling itself with its immediate neighbours.

It remains to add that the book contains photographs of a large variety of Russian scenes and objects, ranging from ikons to tractors ; and that the translator has performed an onerous task particularly well.