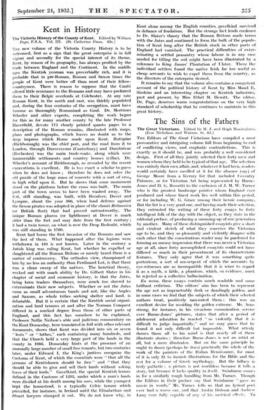 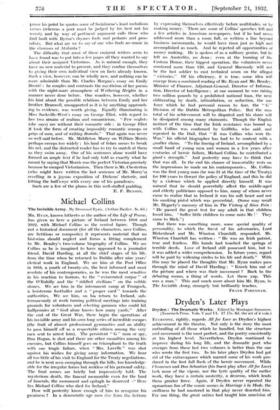 The Sins of the Fathers

THE Editors of The Great rielorians have compiled a most provocative and intriguing volume full from beginning to end of conflicting views, and emphatic contradictions. This is exactly as it should be, and was probably a well considered design. First of all they jointly selected their forty men and women whom they held to be typical of that age. The selection was entirely their own affair, and, whatever it had been, readers would certainly have cavilled at it for the absence (say) of George Moore from a literary list that included Coventry Patmore, or for Victorian Art being represented by llurnc- Jones and D. G. Rossetti to the exclusion of J. M. W. Turner who is the greatest landscape painter whom England ever produced and whose finest work lies well within this period, or for including W. G. Grace among their heroic company. But the list is a very good one, and having made their select ion, they entrusted the xvriting of these forty essays to forty intelligent folk of the day with the object, as they state in the editorial preface, of producing a summing-up of one generation by another. Many of these distinguished essayists give a short and virulent sketch of what they conceive the Victorian age to be, and they so pleasantly and violently disagree with each other that the conscientious reader may be pardoned for forming an uneasy impression that there was never a Victorian age at all, since forty accomplished essayists could not have differed so much in their presentment of its characteristic features. They only agree that it was something quite portentous, a sort of sea-serpent of which the accounts by eye-witnesses are so incompatible that it is wiser to regard it as a myth, a fable, a phantom, which, on evidence, must be rejected as a collective hallucination.

En menu, these essays contain much readable and. some brilliant criticism. The editors' aim has been to represent the age not as impenetrably dark or dazzlingly golden, and in some cases we find that the subjects of which their selected authors treat, positively nauseated them : this was an excellent device for avoiding the golden extreme. Mr. Arm- strong, for instance, in his vivacious eommination service over Burne-Jones' pictures, states that after a period of adolescent adoration he reacted " so violently that it is difficult to judge impartially," and we may guess that lie found it not only difficult but impossible. What utterly damns them all to his mind is that nearly all of them illustrate stories : therefore Burne-Jones is not an artist at all, but a mere illustrator. But on the same principle he ought to damn (perhaps he does) practically the whole of the work of the painters of the Italian Renaissance, for most of it is only fit to furnish illustrations for the Bible and the rest for a volume of Greek mythology. But the fallacy is truly pathetic : a picture is not Worthless because it tells a story, but because it lacks quality in itself. Swinburnc comei in for a similarly rough handling from Mr. Turner. Though the Editors in their preface say that Switiburne " gave us music in words," Mr. Turner tells us that no lyrical poet ever had a worse .ear, and that Austin Dobson and .Thdrew

Lang were fully capable of any of his metrical efff.c.t To prove his point he quotes some of Swinburne's least melodious verses (whereas a poet must be judged by his best not his worst), and by way of pertinent argument calls those who find fault with Byron's rhymes fools and pedants and pros- odists. But what are we to say of one who finds no music in the choruses of Atalanta ?

The difficulty that most of these eminent writers seem to hare found was to put into a few pages all they wanted to say about their assigned Victorians. As is natural enough, they have no new material to present, and they confine themselves to giving their own individual view on facts already known. Such a view, however, can be wholly new, and nothing can be more admirable than Mr. Charles Morgan's essay on Emily Bronte : he couples and contrasts the mysticism of her poems with the night-mare atmosphere of Wuthering Heights in a manner never done before. One wonders, however, whether his hint about the possible relations between Emily and her brother Branwell, unsupported as it is by anything approach- ing to evidence, was worth giving. Equally illuminating is Miss Sackville-West's essay on George Eliot, with regard to her two strains of realism and romanticism. " Few realists (she says) are without their romantic side : in George Eliot it took the form of creating impossibly romantic scamps or prigs of men, and of writing Romola." That again was never. so well said before. Mr. Middleton Murry on William Morris perhaps sweeps too widely : his haul of fishes seems to break his net, and the distracted reader has to try to snatch at them as they swim away. One of his sentences alone would have formed an ample text if he had only told us exactly what he Meant by saying that Morris was the perfect Victorian precisely because he escaped Victorianism. Then there is Mr. Chesterton (who might have written the last sentence of Mr. Murry's) revelling in a joyous exposition of Dickens' rhetoric, and hitting the bull's-eye with every one of his paradoxes. Such are a few of the plums in this well-stuffed pudding. E. F. BENSON.