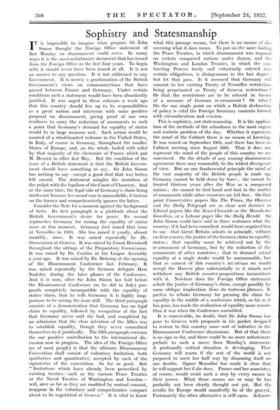 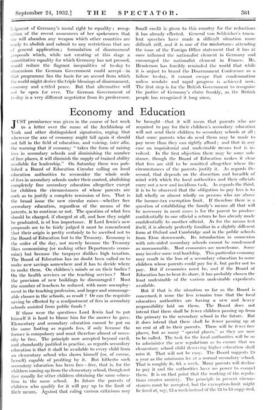 IT is impossible to imagine what purpose Sir John Simon thought the Foreign Office statement of last Monday on disarmament could serve. In many ways it is the most unfortunate document that has issued from the Foreign Office in the last four years. To begin with it should never have been issued at all. It is not an answer to any question. It is not addressed to any Government. It is merely a proclamation of the British Government's views on communications that have passed between France and Germany. Under certain conditions such a statement would have been abundantly justified. It was urged in these columns a week ago that this country should live up to its responsibilities as a great nation and intervene with some positive proposal on disarmament, giving proof of our own readiness to carry the reduction of armaments to such a point that Germany's demand for equality of status would be in large measure met. Such action would be assured of a wholehearted welcome in the United States, in Italy, of course in Germany, throughout the smaller States of Europe, and, on the whole, hailed with relief by that majority of the electorate of France which put M. Herriot in office last May. But the condition of the issue of a British statement is that the British Govern- ment should have something to say. Sir John Simon has nothing to say—except a good deal that was better left unsaid. The statement mingles the moralism of the pulpit with the legalism of the Court of Chancery. And at the same time, the legal side of Germany's claim being irrelevant because her moral case is unassailable, it fastens on the former and comprehensively ignores the latter.

Consider the Note for a moment against the background of facts. Its first paragraph is a platitude about the British Government's desire for peace. Its second reproaches Germany. for raising the equality of status issue at this moment. Germany first raised that issue at Versailles in 1919. She has raised it yearly, almost monthly, since. It was raised repeatedly by Dr. Stresemann at Geneva. It was raised by Count Bernstorff throughout the sittings of the Preparatory Comink3sion. It was raised by Dr. Curtius at the League Assembly a year ago. It was raised by Dr. Bruning at the opening of the Disarmament Conference last February. It was raised repeatedly by the German delegate Herr Nadolny during the later phases of the Conference. And it is now, after Sir John Simon has laid before the Disarmament Conference (as he did in July) pro- posals completely incompatible with the equality of status claim, that he tells Germany it is highly inop- portune to be raising the issue still. The third paragraph consists of a, demonstration that Germany has no legal claim to equality, followed by recognition of the fact that Germany never said she had, and completed by an admission that the clear intention of the Allies was to establish equality, though they never committed themselves to it juridically. The fifth paragraph contains the one positive contribution to the international dis- cussion now in progress. The idea of the Foreign Office (as of most people) is that the ultimate Disarmament Convention shall consist of voluntary limitation, both qualitative and quantitative, accepted by each of the signatories of the convention. So far so good. BUt " limitations which have already been prescribed by existing treaties—such as the various Peace Treaties or the Naval Treaties of Washington and London— will, save so far as they are modified by mutual consent, reappear in the voluntary and comprehensive compact about to be negotiated at Geneva." It is vital to know what this passage means, but there is no means of dis- covering what it does mean. To put on the same footing the Peace Treaties, in which disarmament was imposed on certain conquered nations under duress, and the Washington and London Treaties, in which the con- tracting Powers freely and voluntarily entered into certain obligations, is disingenuous in the last degree ; but let that pass. Is it assumed that Germany will consent to her existing Treaty of Versailles restrictions being perpetuated as Treaty of Geneva restrictions ? Or that the restrictions are to be relaxed in favour of a measure of German re-armament ? Or what ? On the one single point on which a British declaration of policy is vital the Foreign Secretary contents himself with circumlocution and evasion.

- This is sophistry, not statesmanship. It is the applica- tion of the methods of the sehoolmen to the most urgent and realistic problem of the day. Whether it represents the mind of the Cabinet there is no means of knowing. It was issued on September 19th, and there has been no Cabinet Meeting since August 29th. That it does not represent the mind of the people of this country we are convinced. On the details of any coming disarmament agreement there may reasonably be the widest divergence of view. But on one fundamental principle the mind of the vast majority of the British people is made up. Germany cannot be held down by force ; she cannot be treated thirteen years after the War as a conquered nation ; she cannot be tied hand and foot in the Matter of armaments while other countries arc left free. On that point Conservative papers like The Times, the Observer and the Daily Telegraph are as clear and decisive as Liberal papers like the News-Chronicle or the Manchester Guardian, or a Labour paper like the Daily Herald. Sir John Simon could have said in three sentences what the country, if it had been consulted, would have required him to say—that Great Britain admits in principle, without cavil or reserve, the justice of the German claim to equality status ; that equality must be achieved not by the re-armament of Germany, but by the reduction of the armaments of other countries ; that to demand actual equality at a single stroke would be unreasonable, but that as earnest of this country's intentions we would accept the Hoover plan substantially as it stands and withdraw any British counter-propositions inconsistent with it. Nowhere does the Foreign Office statement admit the justice of Germany's claim, except possibly by some oblique implication from its tortuous phrases. It prefers to rebuke Germany for pressing the claim for equality in the middle of a conference which, so far as it has gone, has made the realization of equality more remote than it was when the Conference assembled.

It is conceivable, no doubt,. that Sir John- Simon has gone to Geneva with proposals in his pocket designed to restore to this country some sort of initiative in the Disarmament Conference discussions. But of that there is no sign so far, and there could be no more unfortunate prelude to such a move than Monday's statement. A profoundly critical situation is developing. That Germany will rearm if the rest of the world is not prepared to meet her half way by disarming itself no one doubts: Signor Mussolini has made it clear that he will support her if she does. France and her associates, of course, would resist such a step by every means in their power. What those means are or may be has probably not been clearly thought out yet. But the results for Europe would manifestly be of the gravest. Fortunately the other alternative is still open. AcknoW- lodgment of Germany's moral right to equality ; recog- nition of the recent assurances of her spokesmen that she will abandon any weapon which other countries are ready to abolish and submit to any restrictions that are of general application ; formulation of disarmament proposals which, while not creating at this stage a quantitative equality for which Germany has not pressed, would reduce the flagrant inequalities of to-day to dimensions the German Government could accept—in that programme lies the basis for an accord from which the world might derive the triple blessings of disarmament, economy and settled peace. But that alternative will not be open for ever. The German Government of to-day is a very different negotiator from its predecessor. Small credit is given to this country for the reductions it has already effected. General von Schleicher's trucu- lent speeches have made a difficult situation more difficult still, and it is one of the misfortunes attending the issue of the Foreign Office statement. that it has at once inflamed the nationalist element in Germany and encouraged the nationalist element in France. Mr. Henderson has forcibly reminded the world that while it is unjust to brand the Disarmament Conference as a failure • to-day, it cannot escape that condemnation unless resolute and rapid- progress is achieved now. The first step is for the British Government to recognize the justice of Germany's claim frankly, as the British people has recognized it long since.